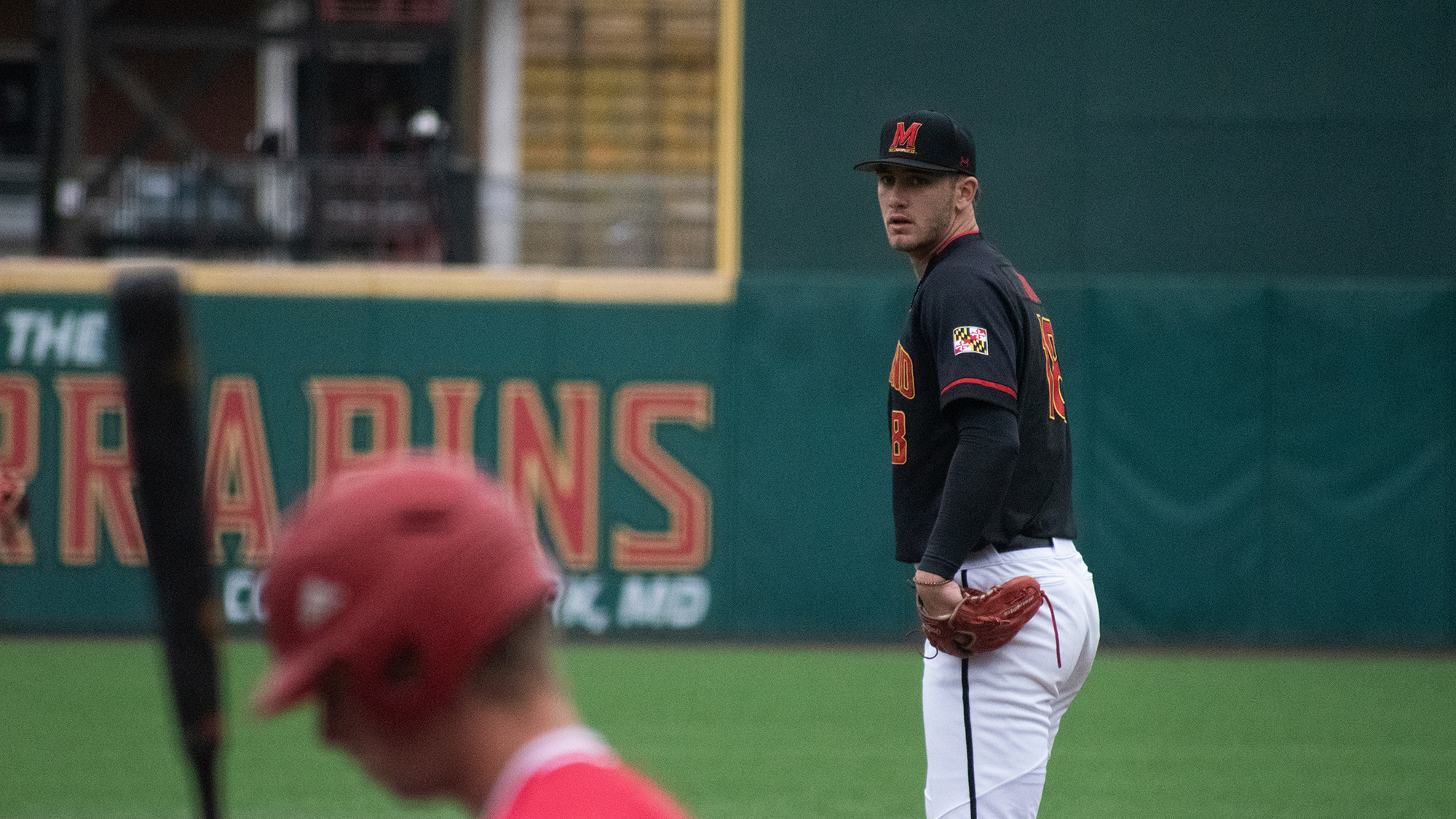 Sean Burke stares down a batter as he prepares to pitch during Maryland baseball's 5-2 win over Indiana on May 29, 2021. Burke took a no-hitter into the seventh inning. (Autumn Hengen/The Diamondback)

Sean Burke did it methodically.

A strikeout here and a groundout there got him through his start, only showing occasional cracks with scattered walks. By the time Burke got to the seventh inning, he had not allowed a hit but had a tiring arm.

A single to center field tarnished his no-hit bid, but Burke still punched out 12 and guided No. 25 Maryland baseball to its second win of the day, a 5-2 triumph over Indiana. Earlier in the afternoon, the Terps walked off the Hoosiers in 10 innings, 4-3.

Weathering a steady stream of rain, Maryland had a long day ahead with its doubleheader Saturday against Indiana. And though the weather stayed rough, Jason Savacool pitched cleanly.

Striking out six in six innings in game one, the freshman glowed early before slightly fizzling later on.

“I challenged Savacool before the game and he did nothing but respond well beyond his years,” coach Rob Vaughn said.

Savacool picked up the slack for an offense that struggled against Gabe Bierman, who entered Saturday third in the Big Ten in ERA. An early Matt Shaw double rattled Bierman into a walk and hit by pitch that helped the Terps bring a runner home, but he cut it short from there.

“I think that [Bierman] is the best, if not one of the best, pitchers in our league,” Vaughn said. “I thought we just had gritty, tough at-bats against them.”

Bierman and Savacool led their squads through scoreless innings until the Hoosiers pieced together a sacrifice fly to even the score in the fourth.

As in most close baseball games, all it takes is one hit to blink out an advantage. Indiana did that in the sixth.

[Maryland baseball is ranked for the first time in 4 years]

Jeremy Houston pulled a double that rose over third base and into left field, setting up a pair of scores by the Hoosiers that put them ahead by two.

Indiana retained the lead until Vaughn made a crucial move to replace Riley Langerman with Luke Shliger at the plate in the eighth. Shliger clanged a double into left field and set up his next two teammates to drive him home.

“Just figured we have three guys right there that all do something a little bit different,” Vaughn said. “Let’s empty the bench and get it done there.”

But Maryland saved its best for last in the ninth.

Rocketing the baseball past the left-center wall, Max Costes took a brisk jog around the bases as he easily knotted the score at 3-3. Two batters later, the Terps had their third extra innings matchup of the season.

Closer Ryan Ramsey did his job with a three up, three down frame to give Maryland a clean shot to win. With the help of the Hoosiers’ Grant Macciocchi, the Terps put three runners on, and Ben Cowles fought for a full count walk to stroll to first and claim victory.

“My message to our guys was the team that wins today is going to be the team that can score with outs, that can make outs to pick up runs,” Vaughn said.

With another game to play and Burke on the mound, more tense action between the two teams was a given. And Burke made it look easy for Maryland.

[Maryland takes critical series from No. 24 Michigan with 7-3 win]

He sat down batter after batter, only allowing five baserunners in 6.2 innings. The last of those few that reached did so on a seventh-inning single, the only hit Burke surrendered all afternoon. It was the longest no-hit bid and one of the best starts of his college career.

“Probably his best outing of the year,” Vaughn said. “He is incredibly focused on being really athletic and attacking hitters and trusting his stuff.”

On the flip side, Indiana’s McCade Brown underwhelmed. He walked eight batters in three innings to help the Terps to a pair of runs. Brown only gave up one hit during his short outing and did more for Vaughn’s offense early than it did for itself.

Brown’s replacement, Braydon Tucker, limited the walks but began giving up knocks. Costes rammed a double into right in the fifth to score Cowles and extend Maryland’s lead to three. Then against Reese Sharp in the bottom of the seventh, the Terps tacked on two more.

Shaw led off with a triple and came home on Cowles’ RBI single. Sharp then loaded the bases with no outs, and Shliger brought home Cowles with an RBI single of his own.

It was more than enough to support Elliot Zoellner, who took over once Burke departed with two outs in the seventh. Though the Hoosiers clawed back a run each in the eighth and ninth, Zoellner struck out Morgan Colopy to secure the triumphant doubleheader sweep.

“We’re going to go out guns blazing [tomorrow] like we did today,” Cowles said.