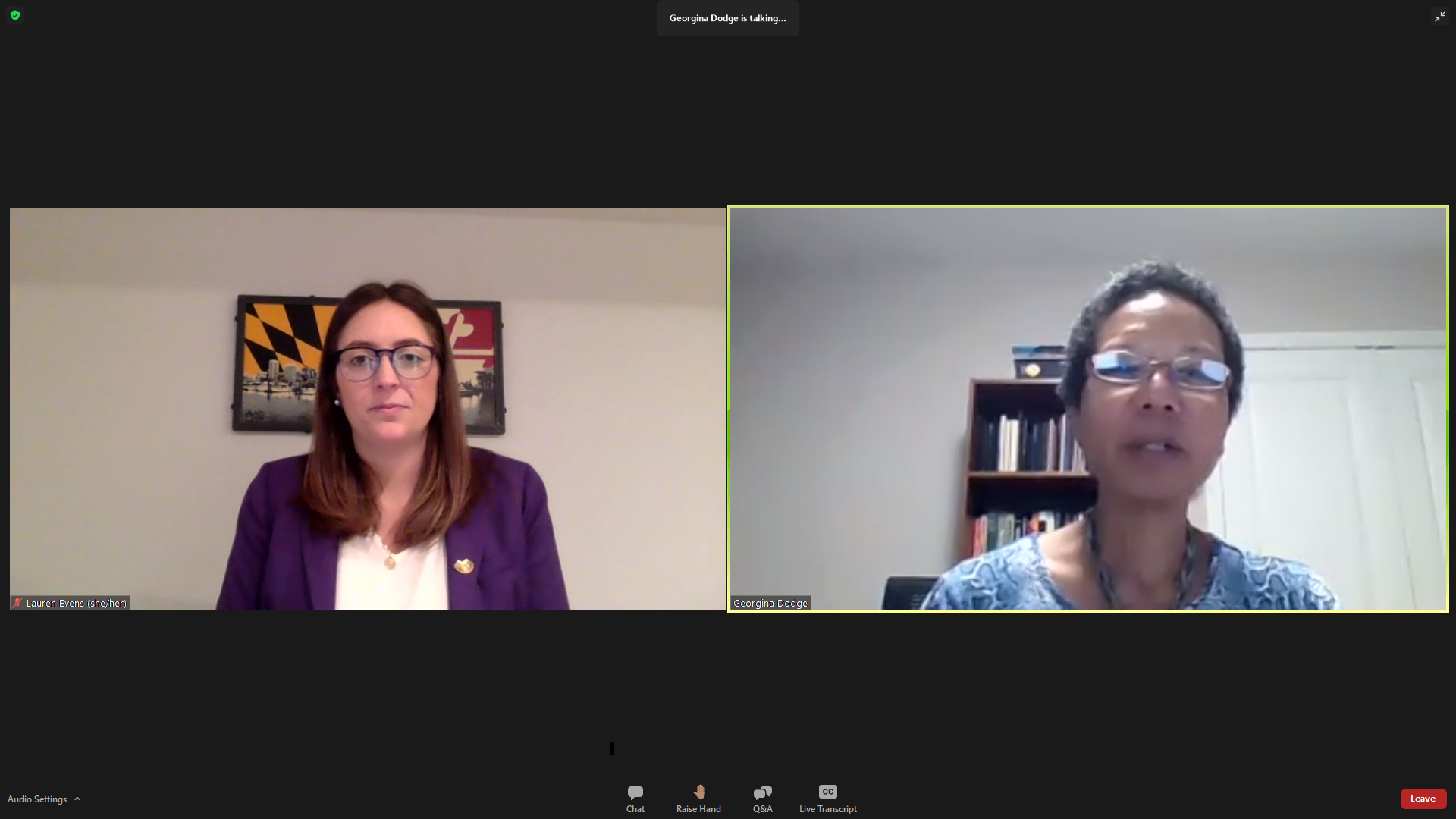 Lauren Evens and Georgina Dodge on May 28, 2021. (Khushboo Rathore/For The Diamondback)

Lauren Evens, the second candidate for the University of Maryland’s Americans with Disabilities Act/504 Coordinator, emphasized the importance of acknowledging ableism and welcoming community members with disabilities during a webinar Friday afternoon.

Evens, who graduated from this university in 2009, is one of two finalists for the position. A third finalist withdrew from consideration on Wednesday.

Evens is currently the ADA coordinator and ADA, Civil Rights and Title IX Compliance Specialist at Towson University. She previously worked as a litigator.

During the webinar, Evens laid out six principles to help create a sense of belonging on campus for students with disabilities. She also called for more spaces and educational material designed to accommodate all students, including community members with disabilities.

One of the principles was engaging stakeholders across campus to increase inclusivity. The work done by the ADA/504 coordinator should not be localized to one office or individual, she said.

The coordinator will report to Georgina Dodge, the university’s diversity and inclusion vice president. They will also work with the university’s Title IX coordinator, the President’s Commission on Disability Issues and other campus community members to ensure ADA compliance.

The coordinator will also oversee compliance with Section 504 of the Rehabilitation Act of 1973, which focuses on equal treatment for students with disabilities, and other parts of the act that cater to community members with disabilities.

Evens emphasized the importance of approaching accessibility through an intersectional lens. During her time at Towson, Evens said, she has worked on including ableism, accessibility and disability culture into diversity and inclusion training.

“[We should be] making sure that it is part of the culture that some people are entitled to and deserve accommodations,” she said.

Evens also said the university needs to incorporate equitable design, accommodating all students in current and future building planning. She called this concept “Universal Design,” and she explained this approach should be used to make education more accessible for students with disabilities.

In 2019, one student wrote a 43-page report highlighting accessibility issues on campus.

“We need to be thinking about whether there are barriers that are preventing students from taking full advantage of their college experience,” Evens said.

Evens also talked about increasing recruitment and retention of staff and students with disabilities.

New students who don’t feel like they belong within their first eight weeks on campus are at high risk for dropping out, and this rate is even higher for students with disabilities, she said.

She outlined multiple ways to retain these students, including making orientation more accessible and creating spaces for students with disabilities.

She called for the creation of a disability cultural center. Unlike service offices, this center would provide programs and community building on campus.

[For some in UMD’s disability community, Joe Biden’s win could mean action for equality]

She also has advocated for affinity groups for faculty and staff. Towson has started a disability and neurodiversity affinity group for employees, which has generated positive responses, Evens said.

“I know that many people are really eager to finally have this space,” Evens said of the affinity group.

She also explained the university should reassess the metrics it uses in the admissions process. Cumulative GPAs are sometimes not indicative of students’ abilities, especially those who may not have received a diagnosis for a particular disability, she said.

“Are there other things that can be looked at to determine how qualified somebody might be to be a student on Maryland’s campus?” Evens asked.

University-affiliated social media pages and websites should be accessible for anyone with a screen reader or keyboard navigation, she said. Campus tours and open houses should also have more accessible routes and accommodations for interested students with disabilities.

Many of Evens’ principles and strategies were echoed throughout her campus programming ideas. Events — online and in person — should have more accessibility information and should be planned to accommodate those with disabilities, Evens said.

“It’s really important to me that members of the campus community feel seen and valued,” she said.