Many buildings at UMD aren’t accessible. This student made a 43-page report to track them. 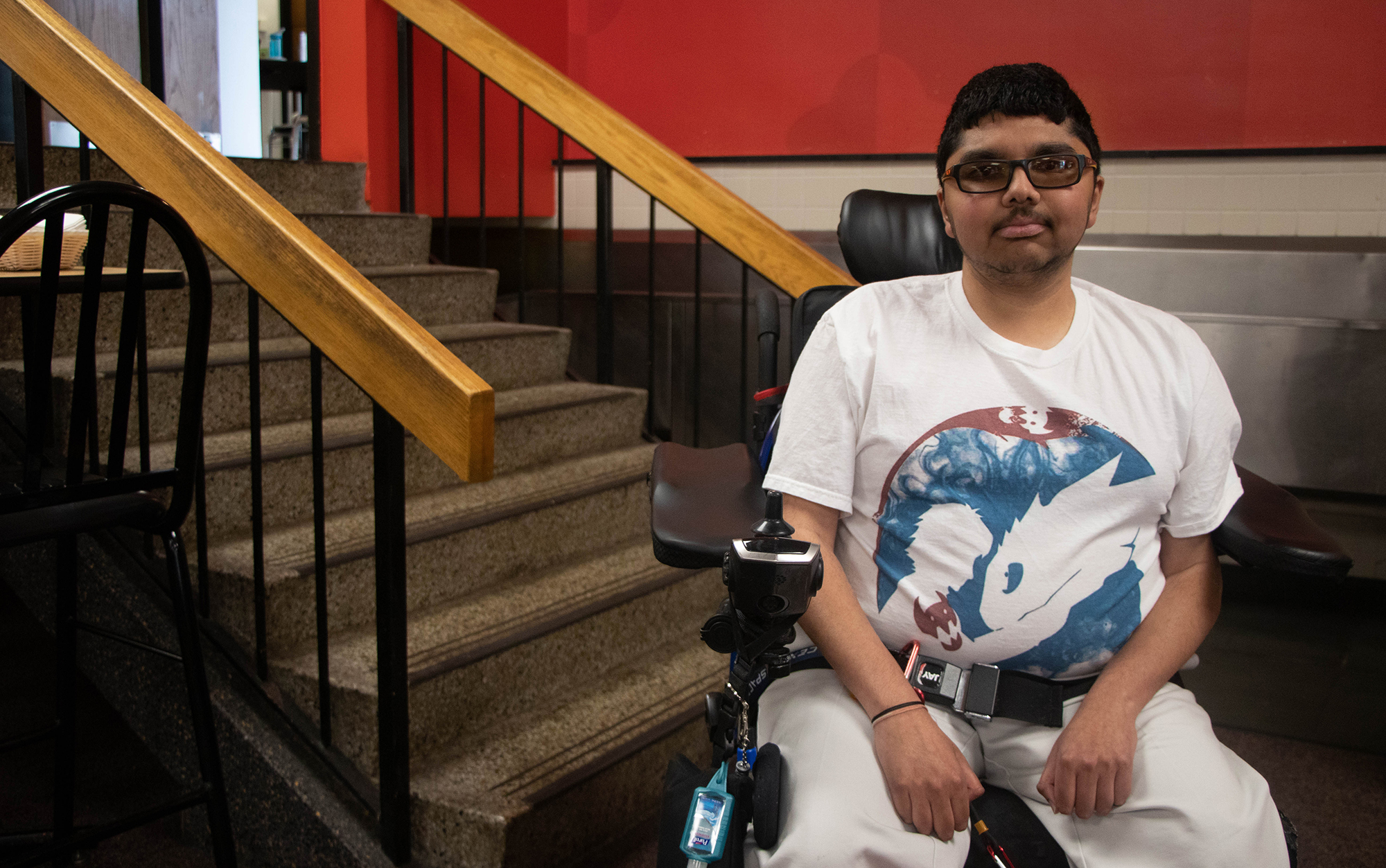 Student Adith Thummalapalli in front of the staircase leading to the South Campus Dining Hall bathroom, which is not wheelchair accesible. (Julia Nikhinson/The Diamondback)

One night last September, Adith Thummalapalli showed up to the University of Maryland’s Kent Hall, excitedly toting a birthday card and a king-sized Kit-Kat bar.

He had helped to plan this day for two weeks — a surprise 20th birthday party for one of his best friends.

Before he left, Thummalapalli, who has a physical disability and uses a wheelchair, checked online and made sure that the dorm had a wheelchair symbol next to it — which indicates there are accessible rooms in the building.

However, when he got to the dorm, he found that he’d need to use the stairs to access the part of the building where his friend’s room was. Unable to do so, he waited outside until his friend came to see him. They talked for about five minutes, he gave her the gift, and he went home alone.

The party went on.

“It was literally six stairs,” the junior mechanical engineering major said, “that prevented me from … spending that night with my friends.”

Four days later, still fueled by his anger and frustration, Thummalapalli began to take pictures and write down observations in an attempt to document inaccessible buildings and other obstacles across the campus. Slowly, his notes grew to a 43-page report.

And on April 3, the Student Government Association passed a resolution to publish Thummalapalli’s report and use it as an effort to urge the administration to make the campus more accessible for students with disabilities.

“We want to see these issues fixed,” said SGA Speaker of the Legislature Noah Eckman. “There’s no reason that so many things on campus should be going so long being inaccessible for some people.”

The resolution passed 31-0 with one abstention.

The report includes pictures, notes and testimonies from students with disabilities and regulations of the Americans with Disabilities Act, proposing solutions for everything from inaccessible buildings to missing curb cuts to inaccessible bathrooms in the South Campus Dining Hall.

Many of the problems Thummalapalli identified are already being tracked in the university’s 2016 ADA Transition Plan, but he said the university hasn’t made it a priority to resolve them. He hopes his report — and the SGA’s endorsement — will help spark change.

In a statement, a Facilities Management spokesperson wrote that the department “want[s] to hear from members of the community who are experiencing accessibility issues on campus.”

“If a student-created report is submitted to our office, we will review it to better understand current accessibility needs and concerns,” the statement read.

Doron Tadmor, SGA’s chief of staff, is the primary member working on the report. He said he was initially inspired by a Feb. 13 article in The Diamondback describing Thummalapalli’s problems with getting to class because of a broken elevator.

“When I met with him, I was just utterly taken aback by the number of issues that exist on campus,” the junior international business and operations management and business analytics major said. “[We want] to give more of a voice for students like Adith to have a better college experience.”

Kristin Woo, another student with disabilities who uses a mobility device, helped Thummalapalli write the report. She’s encountered many of these issues in her daily life.

“There needs to more awareness surrounding this to make sure that campus in general is a more accessible place,” the senior marketing and supply chain management major said, “and that it’s a place that all students can thrive.”

Woo contributed to the report by writing about curb cuts — which allow people with disabilities to access crosswalks — and the section of the lower level of the University Book Center where students get their textbooks. She said that area has a few steps leading down to the books that prevent her from accessing necessary learning materials.

“I wasn’t able to go into the area and actually find my textbook [as a freshman],” she said. “I had to find a worker to basically get it for me, and every time I went to the bookstore after that, I had to bring a friend.”

On Monday, the SGA communication team finished redesigning the document and adding graphics. The body now plans to set up meetings with student affairs vice president Linda Clement, Dining Services director Colleen Wright-Riva and the department of Facilities Management — hopefully by the end of the semester.

Then, they want to reach out to the President’s Commission on Disability Issues to collaborate on ideas for bettering disability access on campus in the future.

And finally, in their most long-term action point, they plan to “explore advocating in Annapolis to change law allowing the University to legally not update buildings to ADA standards if the buildings were built before a certain year,” according to the resolution.

Tadmor, who’s running for student affairs vice president on the Empower Maryland ticket in this year’s SGA election, said he needs to learn more before continuing the legislative efforts.

But for now, Thummalapalli is just happy to send his report out.

“It’s really exciting,” he said. “We want to make sure we keep the momentum going.”