Some UMD bathrooms aren’t accessible enough for people with disabilities 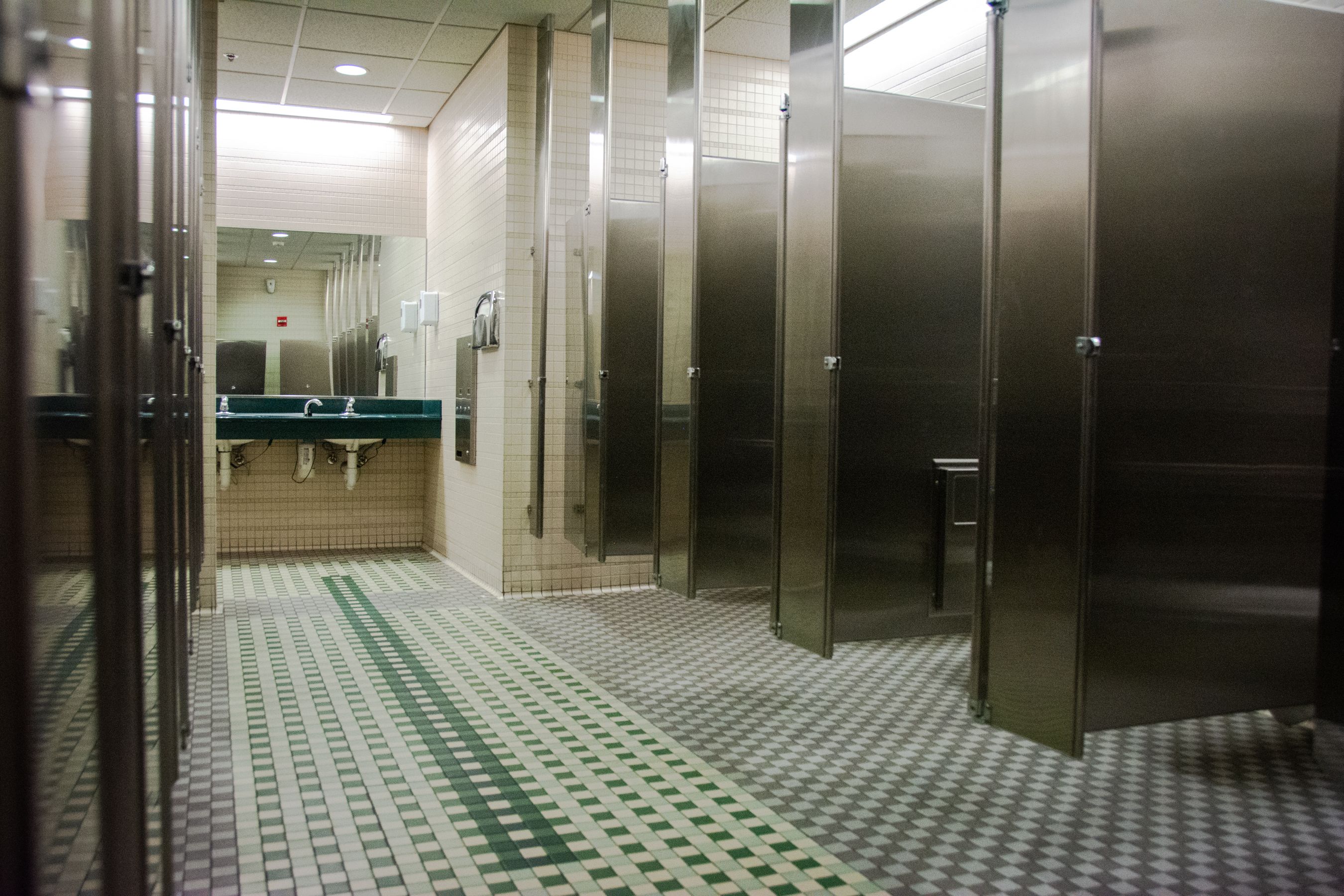 Some campus community members struggle to use UMD bathrooms. Over 50 campus buildings need some sort of restroom renovation — including replacing doors, widening the width of the room and installing automatic door buttons. (Jillian Atelsek/For The Diamondback)

Wherever Marieh Arnett goes on the University of Maryland’s campus, she knows that a trip to the bathroom will take as much as 20 minutes.

The senior psychology and statistics major, who has spinal muscular atrophy and uses a wheelchair, said there are a variety of problems that make her trips to the bathroom inconvenient.

Among the issues Arnett encounters are soap dispensers that are out of reach, heavy doors that are nearly impossible for her to open without a button and “handicapped” stalls that don’t fit her wheelchair.

Arnett, and other university community members with physical disabilities, said they’ve faced problems with the current levels of accessibility that make everyday tasks, like taking a trip to the bathroom, a struggle. Numerous bathrooms at this university aren’t fully accessible, and some of the ones that meet the university’s accessibility standard still present obstacles for students with disabilities.

“Going to the bathroom is a basic necessity,” Arnett said. “You really shouldn’t have to put this much thought in it.”

The university first formally tackled accessibility issues in its 2000 Accessibility and Disability Transition Plan, a document dedicated to outlining a plan for ongoing accessibility projects. The plan was updated in 2010 and 2013, and since the latter year, the university has completed $1.92 million in restroom reconstruction, according to its 2016 report.

“We work to maintain, upgrade, and plan facility spaces that accommodate the various needs of our community,” a university spokesperson wrote on Facilities Management’s behalf.

But the 2016 report also listed nearly 100 buildings — including residence and dining halls as well as fraternity houses — with restrooms that aren’t accessible and still need some sort of renovation, such as door replacements, widened doorways and automatic door buttons.

Some of the buildings on the list of those awaiting bathroom upgrades are prominent locations such as the Health Center, the Main Administration Building and McKeldin Library.

The Americans with Disabilities Act does not require all of these buildings to be accessible.

Rather, the ADA mandates that the university have a transition plan to ensure that it’s on track to remove physical barriers to accessibility.

In a statement, a spokesperson said the university has “corrected many physical obstacles” in recent years, and “all of our programs have been made accessible.”

“While the ADA does not require that all of our facilities be accessible, we know that there are physical enhancements that should be undertaken to enhance program compliance beyond the minimum requirements of the law,” the statement read.

But for many of the people on the campus who identify as having a physical disability, those changes haven’t been enough.

Joseph Williams, a project assistant in the Office of Diversity and Inclusion, echoed the sentiment that inaccessible bathrooms can disrupt a disabled person’s day.

“The point of the restroom is to get in and out as fast as possible and get back to class,” Williams said. “That’s not the case for disabled people.”

Williams, who has cerebral palsy and uses a wheelchair, said his biggest issue is opening the bathroom door. He has to “run into the door” with his chair to get it open.

“You definitely have to be willing to get creative,” Williams said.

These problems pervade the building that Williams works in, Marie Mount Hall, which doesn’t have an push-button system for bathroom doors. He struggles to get into these bathrooms every day, interrupting his workflow.

“It causes you not to be as productive as you could,” he said. “I’m sure I could knock a few minutes off of my bathroom trip if I could just press the button and go.”

Williams added that, depending on the person, trying to get the door open alone could cause injury. In his case, the method of pushing against a door feet first in a wheelchair could cause a foot injury.

It’s this concern that causes Benard Bampoh, a senior computer science major, to wait until someone else is around to open the door for him if it’s not electronic. But most of the time, he just avoids on-campus bathrooms entirely.

Bampoh, who also uses a wheelchair, said he’s unable to use the sink because the joystick on his chair bumps into it, preventing him from getting close enough to wash his hands.

“Bathrooms, in addition to other things, are overlooked just a little bit,” he said.

As a commuter, Bampoh said he rarely enters on-campus restrooms — waiting until he gets home to his more accessible bathroom. Arnett, too, said she tends to avoid going to the bathroom while at the university.

“It’s just not convenient,” Arnett said. “I know my life, and I try to not go to the bathroom during the day.”

Though the university does have plans to renovate many of its non-compliant bathrooms, the transition plan doesn’t explicitly specify when that will happen.

In the 2016 update, many buildings’ bathrooms are listed as needing upgrades. For instance, Marie Mount Hall had 10 bathrooms with this designation. But eight of them had not been completed as of 2016.

Each restroom that was added to the list in 2010 is listed with an estimated cost of $60,000. This is “a budget placeholder amount based on the average cost of recent restroom renovations,” the plan reads.

It’s these renovations, even the smaller ones, that can make the difference in the everyday lives of students with disabilities.

While Arnett said she can reach the sink, she cannot get to the soap dispensers because they are too high up on the wall.

Another issue Arnett and Williams mentioned is the size of stalls — some of which do not allow them to close the door. Arnett said the Stamp Student Union bathrooms were particularly cramped.

“Some of the stalls aren’t large enough to get into the stall and close the door behind you and maintain your privacy,” Williams said. “You may be able to get in but not close the door.”

And some of these issues may not be resolved, according to the transition plan.

Both the 2010 and 2013 updates to the plan specified that if a project merely “correct[s] a minor deviation from the 2010 Standards for Accessible Design,” it would not be included in the university’s renovation plans, as it is “not a barrier to most people with disabilities.” Toilet stall dimensions, along with the width of entrance doors, can qualify as minor deviations if they are less than an inch away from the guidelines.

Arnett remembered an instance where she couldn’t close the door to a wheelchair-accessible bathroom stall because her chair couldn’t fit all the way in.

“Thankfully, it was the end stall,” she said. “So no one is going down there anyway.”

In response to accessibility concerns, a university spokesperson wrote that Facilities Management “encourage[s] the campus community to report their concerns to our Customer Response Center so that we can address any issue they are experiencing.”

Despite the issues, Williams, who works on the President’s Commission on Disability Issues, said he felt the university is on its way to becoming more accommodating — but there’s still much work left to do.

“[The university] is making an effort to provide compliance,” Williams said. “But equity is a completely different thing.”