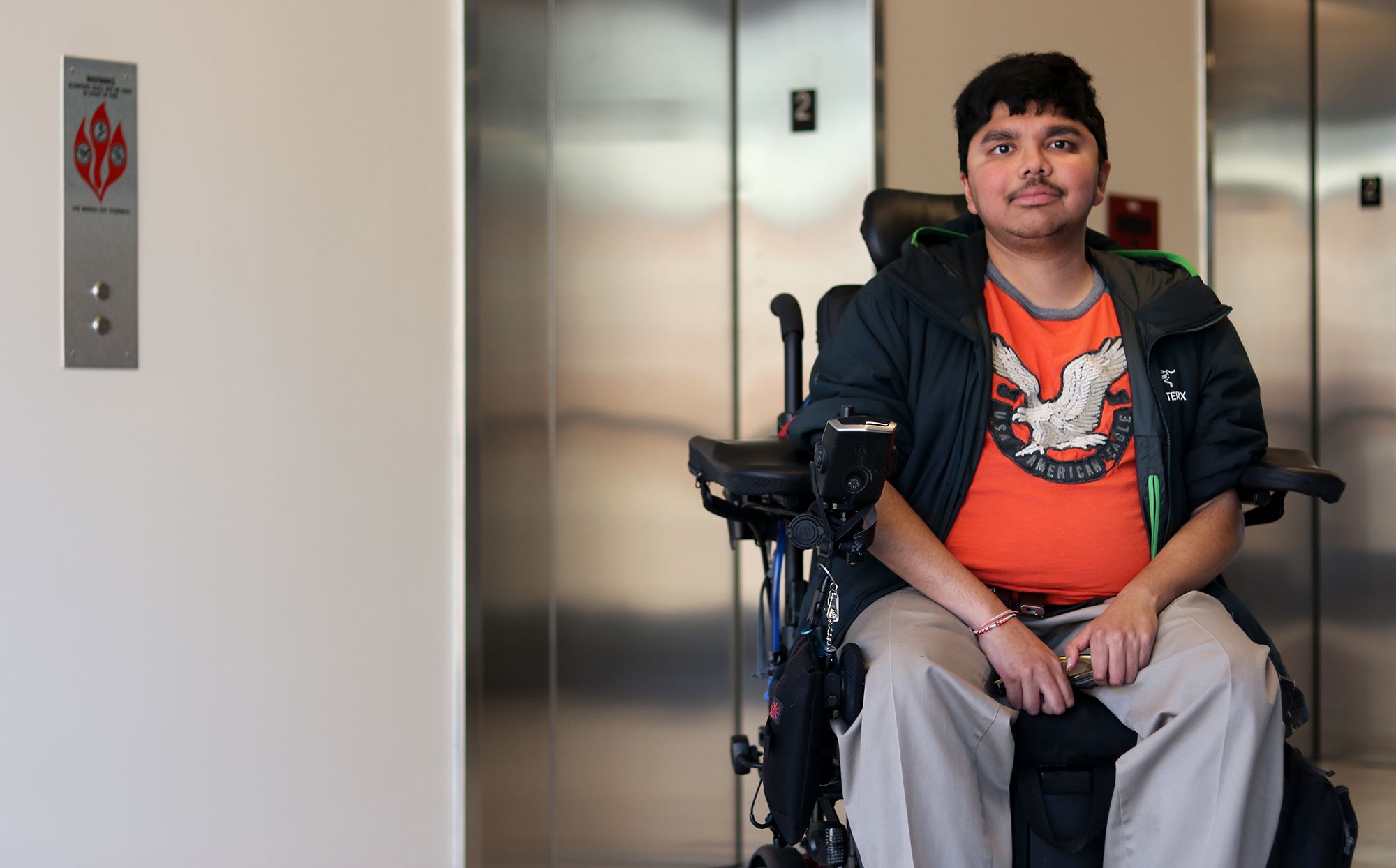 Adith in front of the elevators in his dorm building. The elevator that he needs in order to attend his class in J.M. Patterson had been undergoing "modernization" for weeks. (Julia Nikhinson/The Diamondback)

When Adith Thummalapalli arrived at the University of Maryland’s J.M. Patterson building for his first materials engineering class of the spring semester, he stopped in his tracks.

Next to the building’s only elevator was a flyer, which informed the junior mechanical engineering major that it was out of service for “maintenance modernization.”

For most students, having no elevator access would be a minor inconvenience. But for Thummalapalli, who has muscular dystrophy and uses a wheelchair, it’s a significant obstacle to get to his classes on the third floor.

After searching for help, Thummalapalli realized his 50-minute class had started 15 minutes before, and turned to go back across the campus to his room in Prince Frederick Hall.

While the flyer originally said the “modernization” would be complete by Feb. 1, the date later changed to Feb. 12, Thummalapalli said.

“They have a track record of not completing projects when they say they are going to be done,” he said. “I definitely think it shows that they are recognizing when there is an issue.”

University spokesperson Katie Lawson wrote in an email that the elevator was intended to be finished by the end of January. From there, it awaited final inspection to fully reopen — and she confirmed that it passed inspection and became “fully operational” Tuesday.

In response to Thummalapalli’s predicament, the university’s Facilities Management has changed its protocol to alert the Accessibility and Disability Service of upcoming maintenance projects so that students can make plans to work around temporarily inaccessible buildings.

“We apologize to the individual who was negatively impacted by our elevator project and we have worked to create alternative accommodations,” Lawson wrote in a statement.

Thummalapalli is enrolled in two classes on the third floor of J.M. Patterson — ENME361: Vibration, Controls and Optimization I, and ENME382: Introduction to Materials Engineering. The former has lecture on Tuesday and Thursday, and the latter meets on Monday, Wednesday and Friday, meaning Thummalapalli has to make it up to the third floor every day of the week.

Thummalapalli spent the first week FaceTiming a friend in class or just not going altogether and getting the notes, which made learning more difficult.

“I learn best by attending lecture and being there while the professor is speaking,” he said. “I am a very audio and visual learner.”

After Thummalapalli ran into difficulties getting to class, he reached out to Facilities Management, which told him to call each time he needed to use the elevator and someone with a key to it would pry the doors open by hand and take him up.

But even so, it could take between 10 and 15 minutes for a maintenance employee to get to J.M. Patterson, unless there was one currently working on the elevator, Thummalapalli said. That could make him late for classes that are “integral to his degree.”

“It’s been a big impediment on my learning,” he said.

Marieh Arnett, the president of Delta Alpha Pi — an honors society for students with disabilities — is hopeful the change will help eradicate issues like Thummalapalli had.

“I think it will definitely help because the students can alert their professor [about the construction],” said Arnett, a senior psychology and statistics major. “And maybe the professor will care enough to move the class.”

Arnett, who has spinal muscular atrophy, recounted a similar experience to Thummalapalli: She showed up for an 8 a.m. class in Jiménez Hall, just to be told the elevator was out.

“I literally wasted a half an hour — and it [was] great because then I [couldn’t] go to class,” Arnett laughed. “But if I had known before, I wouldn’t have had to go.”

In the first email sent out to all ADS-registered students Tuesday, ADS forwarded a project alert from Facilities Management for Symons Hall informing them of the date and nature of the project. ADS added a note encouraging students to contact the department for assistance.

But for Thummalapalli, an underlying issue remains — the university’s disregard for how campus projects can cause inaccessibility that affects educational opportunities for students with disabilities.

“[Students with disabilities are] getting the shorter end of the stick — it just seems like the university doesn’t care about us,” he said. “We’re still students, and we’re still paying the same full tuition as everyone else.”