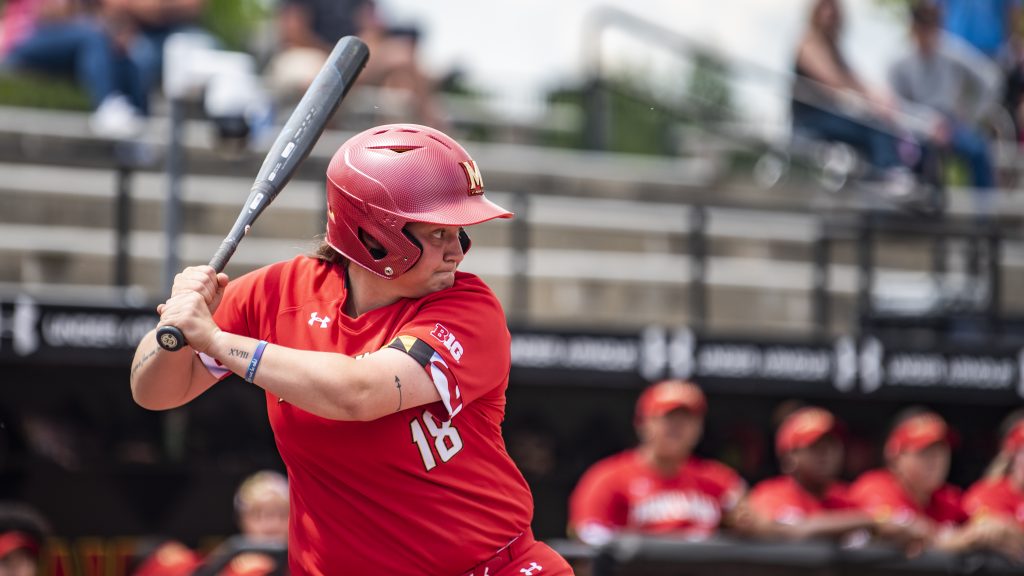 In an ever-changing batting order, Taylor Liguori has made herself comfortable batting clean-up.

Just after the Indiana Hoosiers tied the first game at one, Liguori took the plate with the bases loaded. Liguori worked Emily Goodin up to a full count– rifling off fouls to stay alive.

Liguori finally drilled a hard grounder up the middle through the infield and past Goodin and Brittany Ford at second base. Megan Mikami sprinted from third to home and scored with time to spare.

Meanwhile, JoJo McRae zipped from second, around third and was 60 feet away from a two-run lead. Taylor Lambert rocketed a throw from center field to catcher Bella Norton at the plate.

McRae slid past the plate and brushed it with her hand to beat Norton’s tag and snag a win for her squad.

Maryland softball took its final doubleheader of the season against Indiana. The Terps triumphed in the first game, 3-1 on the back of Courtney Wyche’s complete game, only allowing two hits in the outing. Maryland’s bats exploded in the second game, burning through four Indiana pitchers and the Terp pitchers were stellar, shutting out the Hoosiers, 5-0.

Maryland found its first run of the weekend against the Hoosiers in the opening frame. Goodin fired a wild pitch past Liguori. And with Jaeda McFarland and her patented speed on third, that mistake was costly.

McFarland sprinted home and beat the catcher to the plate to break out on offense after being no-hit by Goodin yesterday.

Wyche stunned Indiana’s offense for five innings. She allowed one hit through five frames and finished the game with six strikeouts.

Lambert had the single hit before the sixth inning when she broke through again in crunch time. She bounced a single to shallow infield and Regan Kerr ran in from first base to field it. Taylor Okada sprinted from second to cover first, but Kerr’s throw zipped past her.

Lambert took off for second and McRae’s throw in foul territory was not in time.

Gabbi Jenkins drilled a hit to center field to score Lambert and tie the game at one in the sixth.

In the bottom of the same inning, Liguori’s two-RBI single took the lead and won the first game of the day for the Terps.

Maryland got on Goodin early in the second matchup. McRae chopped an infield single over Goodin’s head in the opening frame and she beat the play to first.

McFarland followed with a single into right field and McRae’s speed carried her to third. Aaliyah Andrews’ throw from right field would drop and hit McRae. The ball deflected into foul territory as McFarland reached second and McRae was waved home by coach Mark Montgomery.

McRae scored and McFarland joined on a single by Okada. After an explosive first inning, Goodin was swapped out for Natalie Foor.

Liguori earned another RBI in the third frame. With McRae on third, Liguori popped up to shallow right field. McRae tagged up and sprinted home, sliding to beat yet another tag by Norton.

In the fourth, the Terps’ bats came alive. Mikami smoked a triple to right field. Two batters later, Kerr hit one of her own. Kerr’s ball flew into the left-center field gap and Mikami scored to push Maryland’s lead to 4-0.

McRae scored her third run of the contest in the fifth inning, crossing the plate once more on an Okada double crushed to left-center.

Maryland’s Jennifer Brann struggled to keep the bases clear in the final two innings, letting runners on in both. But, she recovered to keep the Hoosiers off the board and give the Terps two wins on the day.