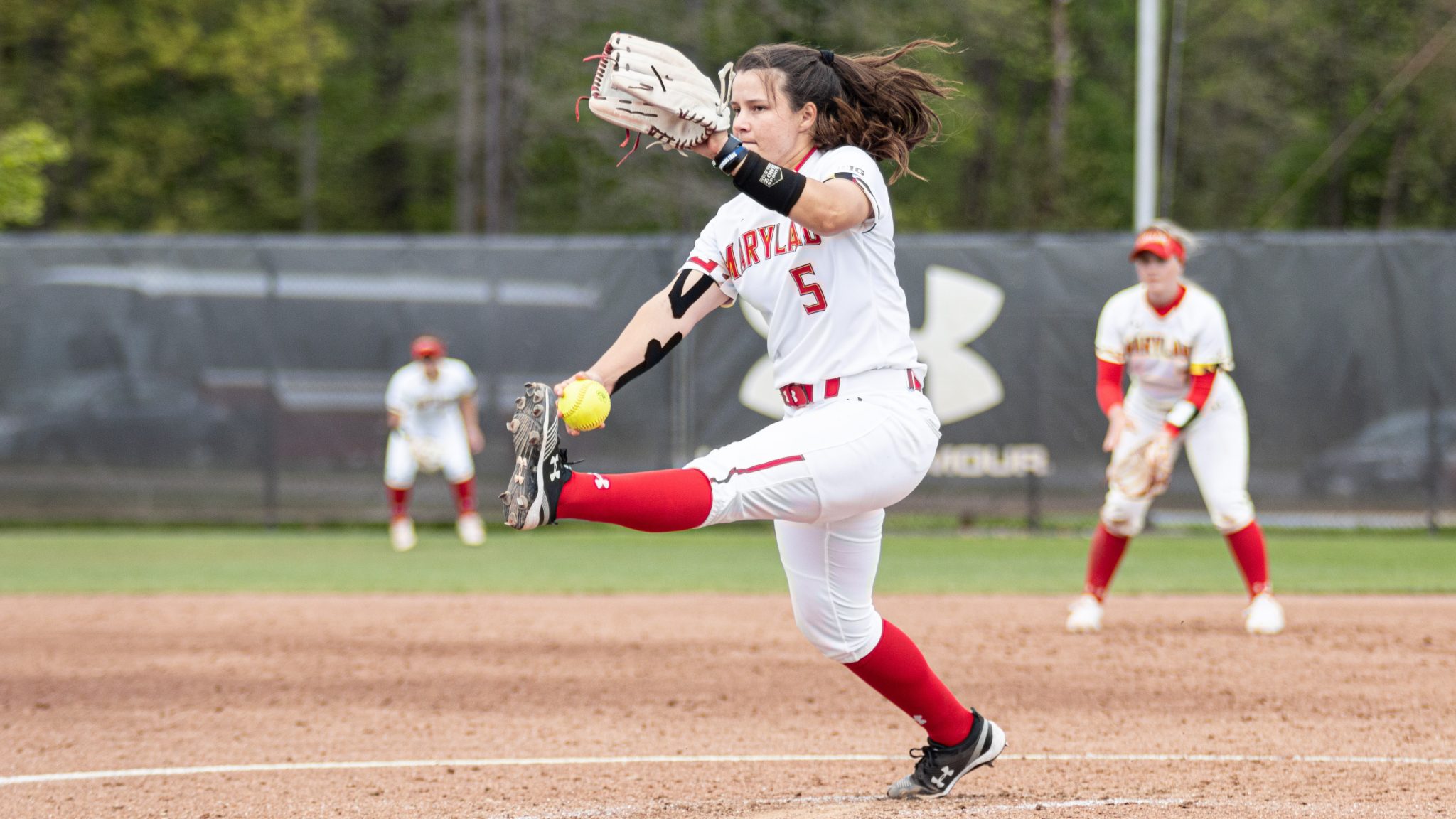 Jennifer Brann winds up to deliver a pitch during Maryland softball's 5-4 win over Penn State on April 25, 2021.

JoJo McRae stepped into the batter’s box with the bases loaded and two outs in the second inning.

McRae drilled a hit to the left side. The bouncing ball deflected off Anyssa Iliopoulos in left field and flew over her head.

The runners sprinted around the bases. Micaela Abbatine, Michaela Jones and Regan Kerr all scored.

Hailey Hoklotubbe fielded the ball from deep left. McRae sped from second to third as Hoklotubbe hurled a cutoff to Gabrielle Callaway.

McRae hit the ground and slid just as Callaway’s throw hit Payton Lincavage’s glove at third. She was called safe.

Thanks to early offensive aggression, Maryland softball took its final game of its series against Rutgers, 4-1. After falling in the first game, the Terps rebounded to take the series from the Scarlet Knights.

After McRae’s knock in the second inning, Jaeda McFarland took the plate. McFarland lined a hit into left center, and McRae scored in plenty of time. Maryland took an early 4-0 lead, and Rutgers never recovered.

Jennifer Brann kept the Scarlet Knights off the bases for most of the game. Brann tallied seven strikeouts and only allowed one hit in 4.1 innings.

Trinity Schlotterbeck got Brann out of a jam in the fifth inning. Hoklotubbe singled to right, and Brann walked Kobie Hura to put a runner in scoring position with one out.

Schlotterbeck struck out Lincavage, and Callaway grounded out to end the inning and keep Rutgers off the board.

Courtney Wyche stepped into the circle to finish the game. Wyche had pitched 10 scoreless innings in the series, and she intended to finish the job. She retired four straight Scarlet Knights before Lincavage snapped Wyche’s scoreless streak.

Kiana Workman doubled into left field, and Hoklotubbe followed with a single to advance her to third.

Though Schlotterbeck then made a diving catch at first base to keep the runners on first and third, Lincavage knocked a hard single into center field to score Workman for Rutgers’ only run of the day.

It cut into a lead that the Terps previously had a chance to pad. In the seventh inning, McFarland and Taylor Okada both singled to put runners on first and second with two outs. Coach Mark Montgomery sent Caitlyn Koenig to the plate to hit her teammates home.

Koenig racked up a 3-2 count. She chipped a fly ball to shallow left field, but Workman got under it to end the inning. Then, Wyche got Callaway to ground out in the bottom of the frame, securing a win for Maryland.

The Terps finished the game with four runs on eight hits as they took their penultimate series of the season.