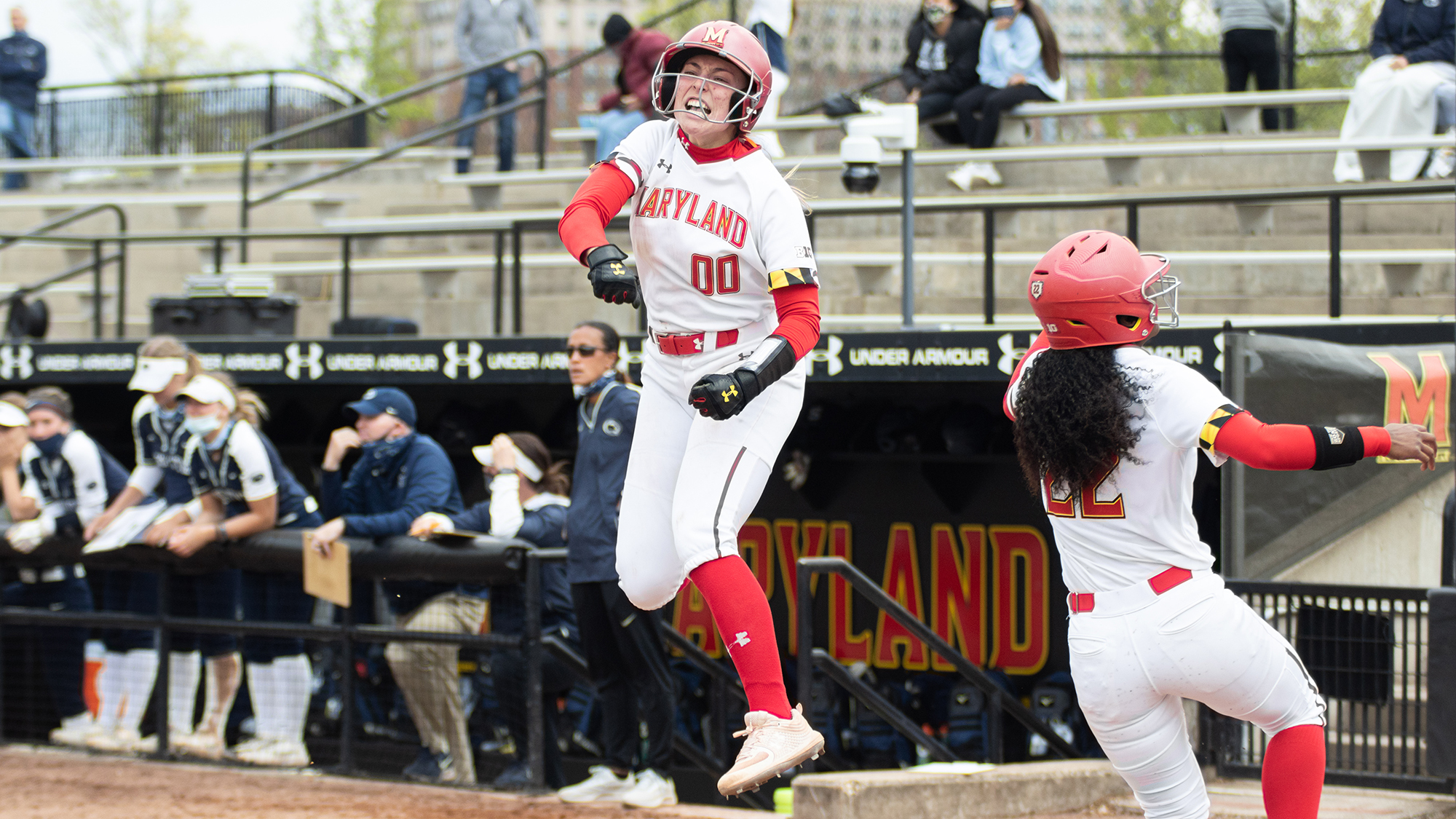 With Regan Kerr and Campbell Kline on base, it was back to the top of the order in the bottom of the seventh for Maryland softball, down 4-2 against Penn State. Jaeda McFarland stepped to the plate ready to clear the bases.

She laid down a bunt to Michelle Leone at third base and took off running. Leone rocketed a throw to Maggie Finnegan at first base, but it was out of her reach.

With the ball rolling in foul territory, Kerr and Kline saw their chance. The runners sprinted around the bases to tie the game at four.

But the ball kept going into right field. Coach Mark Montgomery jumped on the left field line, calling McFarland home. Right fielder Liana Jones grabbed the ball and fired it to the infield.

McFarland outran the ball and touched all four bases on what started as a bunt.

Montgomery jumped and lifted his hat in celebration as the dugout cleared. McFarland was swarmed by her teammates, and some of them wiped tears from their eyes.

McFarland cleared the bases in an unlikely fashion to steal a 5-4 walk-off victory for the Terps over the Nittany Lions and win the series.

Kennedy Legg was the first batter of the game. Legg took two strikes, and then she swung. The ball flew high over the head of JoJo McRae in far right field and over the fence for a game-opening solo home run.

And that homer set the tone for Penn State’s offense for the rest of the game. The Nittany Lions had four runs and seven hits on the day, their most in the series.

Ruby Butler took the plate with two outs in the bottom of the first. Butler drove the ball just over the head of Claire Swedberg at second base. It rolled and bounced off the right-center fence for a triple.

Vanessa Oatley walked Trinity Schlotterbeck to put runners on the corners. She took leads from first, and catcher Ally Kurland was ready. Kurland fired the ball to Kaitlyn Morrison at third base to lure Butler home from third.

And she went. Butler sprinted and slid into home just under Kurland’s glove to tie the game at one.

There wouldn’t be another score until the fifth frame when Kurland lined a two-run double into right field.

Penn State struck again in the sixth inning. With Finnegan at second base, Morrison dropped a single into shallow right field. McRae ran in to field the ball. She rocketed a throw to catcher Gracie Voulgaris to hold Finnegan at third base.

But the ball flew wide, and Finnegan came home to extend the Nittany Lions’ lead to 4-1.

The Terps didn’t go down without a fight. Butler crossed the plate again in the bottom of the sixth on Megan Mikami’s RBI groundout. And in the seventh, it was chaos.

Leone fielded McFarland’s one-out bunt and zipped the throw over Finnegan’s head and down the right field line. Kerr, Kline and McFarland kept running, and as the latter crossed the plate standing up, she was mobbed by her teammates, celebrating an improbable win.