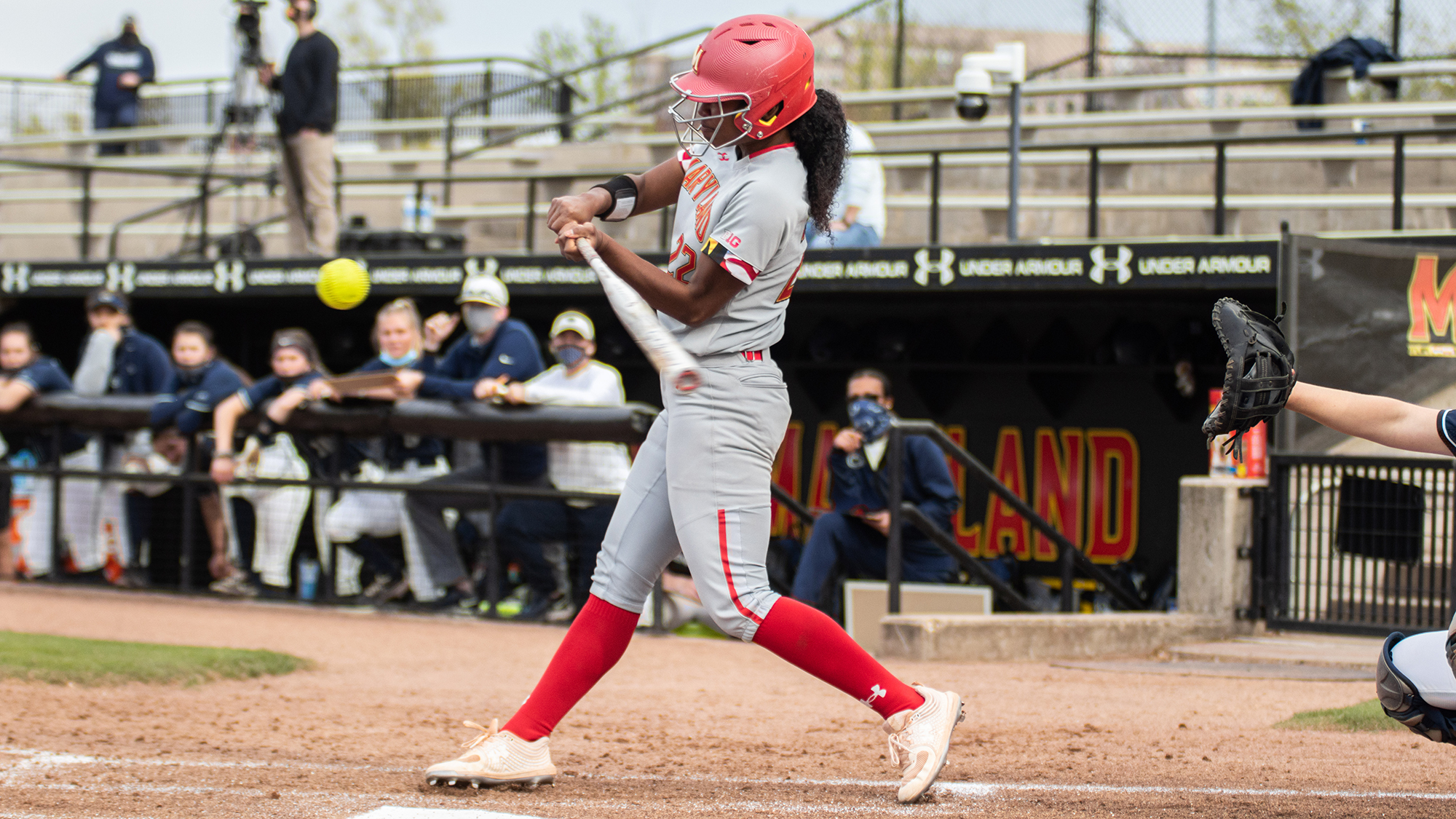 Jaeda McFarland stepped into the batter’s box as the sun was setting. After a defensive battle in the first game, Maryland softball was seven runs ahead of Penn State in the third inning of game two.

McFarland swung the bat, and JoJo McRae took a lead from first base. The ball rocketed in the air and McRae craned her neck on the basepath to see where it was going.

McFarland’s ball soared over the heads of the outfielders and out of the park. As she rounded second, McRae clapped and smiled back at the freshman as they took a lap.

McFarland’s second home run of the year pushed the Terps into mercy rule territory as they took an 11-1 win against the Nittany Lions in five innings, completing the doubleheader sweep after a 1-0 win earlier in the afternoon.

Penn State swaggered into College Park backed by a confidence-boosting three-game winning streak, its only one this season. Meanwhile, Maryland was looking to snap its longest losing streak of the season after being swept by Michigan last weekend.

And the Terps did.

The first contest of the day was a battle between pitchers Jennifer Brann and Bailey Parshall. The first six innings of the game were scoreless and Parshall only allowed one hit until the fifth inning.

In that frame, Ruby Butler smoked a one-out triple to right field that bounced off the fence. It was Maryland’s 17th three-bagger of the season, the highest in the Big Ten. Her teammates couldn’t send Butler home, though, as Taylor Liguori and Megan Mikami both grounded out to end the inning with the game scoreless.

But in the sixth, the Terps broke through, thanks to poor defense by the Nittany Lions. McFarland bounced an 0-2 pitch to Maggie Finnegan at second base to lead off the inning. The ball deflected off her leg and into the outfield, and McFarland took first.

Then, with McFarland on third, Trinity Schlotterbeck knocked a grounder to Michelle Leone at third base. Leone launched the ball with full force to the plate, and it flew past catcher Ally Kurland. McFarland jogged across home for Maryland’s first run of the day, and the one that won it the 1-0 game.

In the second contest of the day, Penn State got on the board first. Kennedy Legg drove a double down the right field line and scored Claire Swedberg from second base.

Then, the Terps’ offense exploded.

With the bases jammed in the bottom of the first, Haley Ellefson singled into left center, scoring McFarland and tying the contest. Campbell Kline stepped into the batter’s box looking to clear the bases. And she almost did.

She laced a triple into center field, scoring Taylor Okada, Schlotterbeck and Ellefson. Kline and Michaela Jones then came around on a McRae single, as Maryland hung six in the frame.

And the Terps continued pounding the Nittany Lions’ pitching staff. In the second, Okada scored on a wild pitch, and Schlotterbeck came around on an Ellefson RBI double. Then, McFarland’s two-run blast in the third put the game in mercy rule territory.

Another run in the fourth pushed Maryland’s lead to 10, plenty of support for Schlotterbeck. After the first-inning double from Legg, the right-hander did not allow another baserunner, retiring 15 in a row.

The last of those was Leone, who grounded out to Butler to seal the 11-1 mercy rule victory and a doubleheader sweep for the Terps.