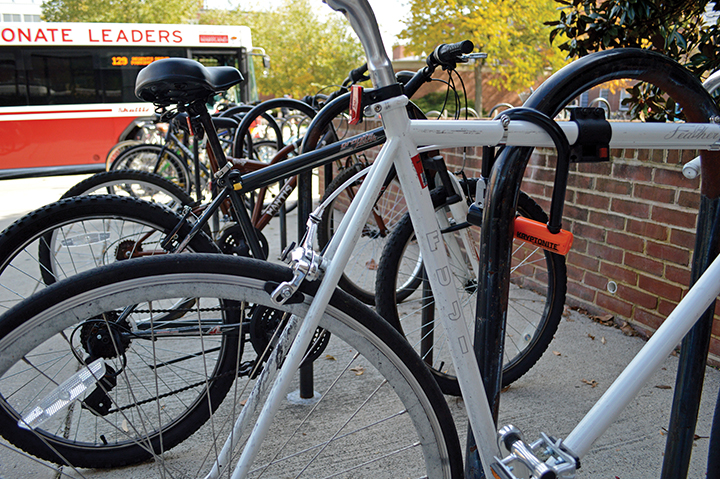 The city of College Park is planning a proposed bike lane redesign project, which received support from many community members.

The project, which has been in the works since 2018, will span part of Rhode Island Avenue, with residents weighing in during various stages of development.

Current plans for the project indicate the bike lanes will run from Muskogee Street to Greenbelt Road, right next to the main roadway. The lanes will be five feet wide, said Stacy Barefoot, the company’s senior project engineer for this project.

Discussion of the design plans comes amid ongoing concerns about biker and pedestrian friendliness in the city.

Because it has few paths and lanes shielded from traffic, College Park is not been very friendly to bikers and pedestrians, District 1 council member Fazlul Kabir said. Kabir represents North College Park, which will be at one end of the Rhode Island Avenue bike lanes.

“Some parts of the town … have shared bike lanes, meaning the main roadways are designated as bike paths as well,” Kabir said. “That is the situation now, but we’re working on it.”

The Rhode Island Avenue project aims to address such concerns by putting flex posts at intersections along the proposed bike lanes, adding two-foot painted buffers and narrowing traffic lanes from 12 feet to 10 feet, which Kabir said has been proven to slow down cars.

But some think funding limitations and jurisdiction issues stunt the project’s full potential.

Parts of the project that run along non-city roads are under the State Highway Administration’s control — including the intersection of University Boulevard and Greenbelt Road, a spot Mayor Patrick Wojahn called a “potential problematic area.”

“I see bicycle traffic coming out right into traffic just at the moment where oftentimes you see cars rushing down to get to the slip lane as quickly as possible to head west on University [Boulevard],” Wojahn said.

Original plans for the bike lane project included a shared-use path for bikers and pedestrians at that intersection, but due to SHA funding cuts, that is no longer likely.

District 1 council member Kate Kennedy, who often rides her bike in College Park, said she understands the state’s funding limitations but said she wonders if adding a shared-use path or other safety measures at the intersection is a “separate thing” the city can do later.

In 2019, residents named creating and improving bike lanes, paths and sidewalks as the top priority for improving their quality of life in a College Park community survey.

Stuart Adams, a resident of College Park’s Calvert Hills neighborhood, is comfortable with biking, he said, and he often rides 40 to 50 miles at a time. But despite his expertise, he would like to see improvements for bikers at the University-Greenbelt intersection and other hazardous areas.

“193-Greenbelt Road … is probably one of the worst intersections in College Park,” Adams said. “With the amount of students and the amount of individuals now that are biking, in particular with a pandemic and using that as an exercise … there’s always room for improvement.”

Kristy Maddux, a nine-year College Park resident and communication professor at this university, said the dangers are not just limited to one particular intersection.

Maddux uses her bike to commute to work and take her three children to school. She said she is comfortable on trails such as the Trolley Trail, which serves as the access point to Rhode Island Avenue for many bikers.

When it comes to roads, though, Maddux said she worries parts of the city are risky.

“It’s very easy to bike recreationally. The missing piece has been being able to actually get places that are further away,” Maddux said, adding that the section of the city from Greenbelt to North College Park is a “key link to fix” to make the city more bike-friendly.

Maddux’s involvement in the Rhode Island Avenue project is part of her larger vision of accessibility for all bikers in the city, regardless of age or ability.

“Right now, too much of our bike infrastructure relies on people being willing to have fancy bikes and being in great shape and a certain level of confidence on the road,” she said. “I’d like biking to be more accessible to more people.”

Kabir said he wants the future of bike lanes in College Park to reduce traffic congestion, especially on Route 1.

“I want to see more streets that are safer to bike because I want to reduce the number of vehicles on the streets,” Kabir said, adding that he hopes to see “more modes of transportation within the town.”

Adams also has a vision for the future of cycling — for him, it’s about connecting College Park with the wider Washington, D.C., metro area.

“If there was a protected bike lane, I do believe a lot of people would consider biking into D.C. a lot more often, and I think this project would be a part of that where College Park is doing its part,” he said.

Despite the potential for slow progress, Kennedy said she’s hopeful for the future of biker accessibility in the city and looks forward to the many bike-related projects that may await.

“We have a lot more that we’re trying to do moving forward to increase sidewalks and bike trails,” Kennedy said. “It’s going to take a while. And I think it’s super important.”