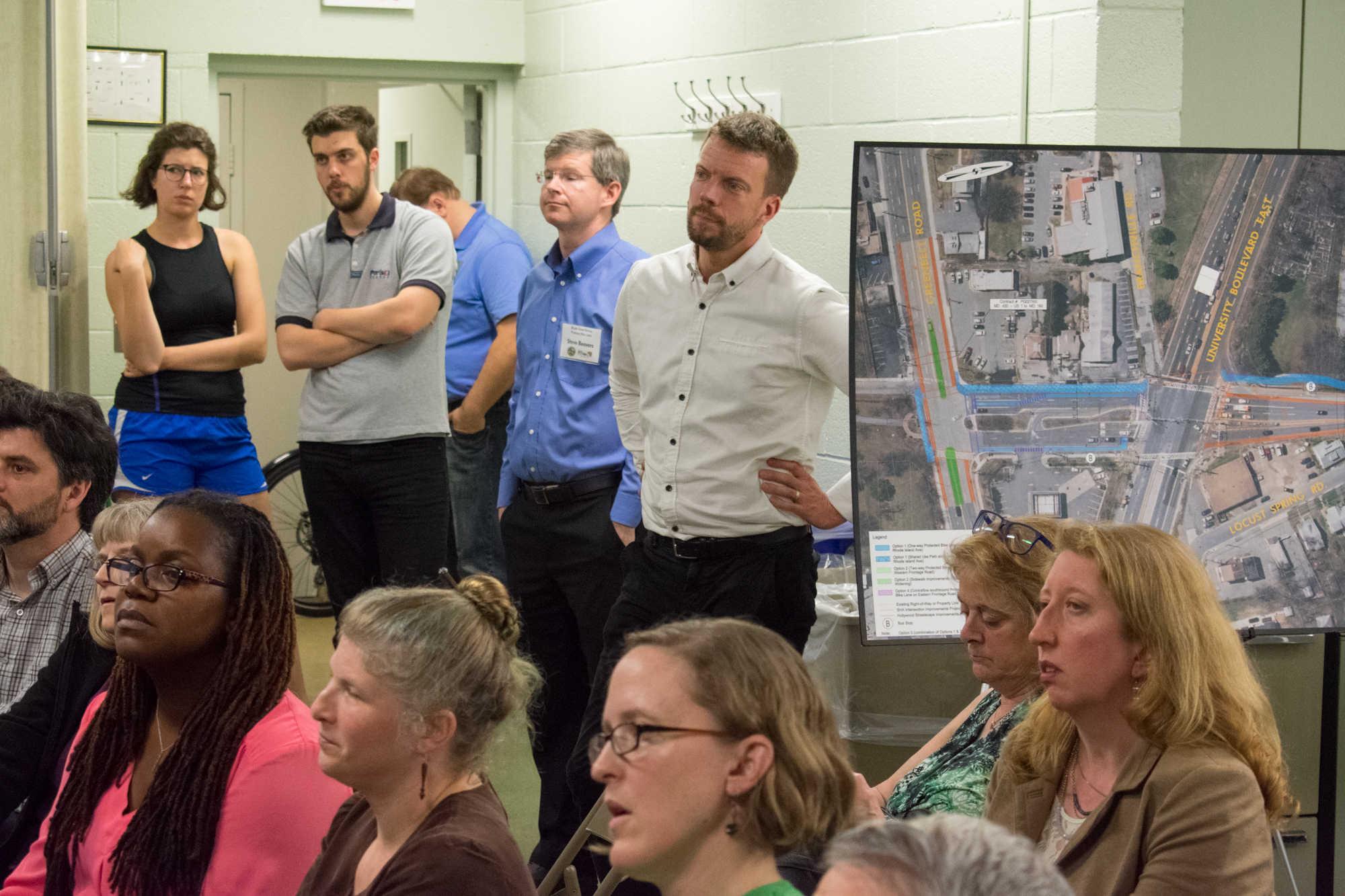 Mayor Wojahn listened in to a community meeting about bike lanes that took place in Davis Hall on Feb. 21st, 2018 (Elliot Scarangello / The Diamondback).

The second option offered an eight to ten-foot, two-way protected bike lane with a two-foot buffer, accoring to the firm’s presentation. In this iteration, there would be a one-way lane for southbound vehicular traffic, and a parking lane along the western roadside.

[Read more: Thanks to a new sidewalk, UMD students will soon have an easier route to Whole Foods]

The third option was a combination of the first two, and the fourth was similar to the second, but would feature a smaller, southbound, protected bike lane and a northbound shared lane for both bicycle and vehicular traffic.

These options didn’t sit well with Jonathan Artis, a resident of the Hollywood area, who said he thinks there will be a lot of pushback on those options.

“So far … I’m not that impressed,” he said. “I think there should be other options.”

Emily Larkin, who often commutes via bike in good weather, said the proposals were “not great solutions.” Although she would love to see barriers put up, she worries that it will become a similar situation to downtown, in which she said people walk in bike lanes.

Community development coordinator Steve Beavers said he’s heard mixed input from residents. A lot of people are supportive, he said, but have concerns about changes to the service roads.

“We’re trying to be receptive to those things and work with our consultants to find that solution that balances everybody’s needs,” he said. “The overall goal is to really make it as safe for bicyclists in this northern part of the city as safe as it is in the southern part, south of Greenbelt Road.”

Oscar Gregory, who used to be a biker, said he’s happy with the status quo, but that congestion on Route 1 and Rhode Island Avenue needs to be reduced.

“That would solve a whole lot of problems,” he said. “Right now … painting the road is not necessarily the safest thing to do for anybody whether or not it’s an adult biker or certainly a child biker.”

District 1 Councilwoman Kate Kennedy said the general consensus she heard was that residents don’t want service roads to be used for bike lanes and people are nervous about one-way traffic.

Kennedy called herself a “novice biker,” and said the first option appealed to her the most, though people who commute daily via bike might have different needs.

“I’m glad that we’re doing this,” she said. “Anything that can encourage metro riding and bike riding and walking I think is a fantastic thing for the city to be doing.”