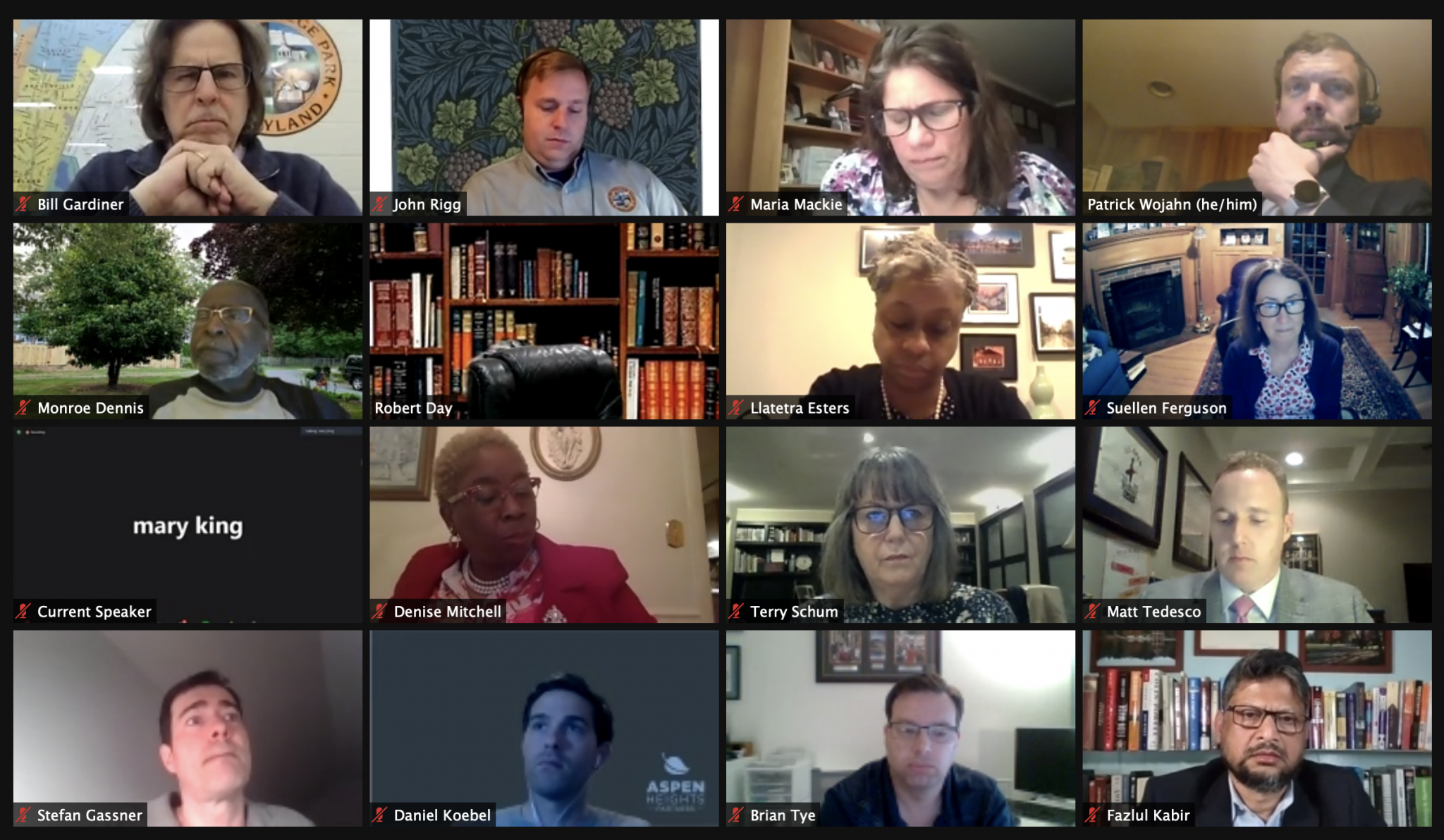 The College Park City Council at its March 23 meeting. (Shifra Dayak/For The Diamondback)

The College Park City Council voted unanimously Tuesday night to award a construction contract to a developer to add bike lanes and widened sidewalks to a stretch of Rhode Island Avenue.

The council’s vote will give a contract worth more than $2.8 million to Beltsville-based contractor Olney Masonry for the Hollywood Commercial District Streetscape project.

The project is an attempt to make College Park’s Hollywood Commercial District more vibrant, according to the city’s website. It’s set to include landscaping, along with sidewalk extension areas with plants and benches known as “parklets.”

The award and its recipient were finalized after city officials reviewed eight construction bids ranging from more than $2 million to more than $4 million. Olney Masonry was the second-lowest bidder, and the company has “a long-standing reputation of doing quality work for Prince George’s County,” according to city documents.

Olney Masonry is projected to finish construction on the project by the end of this year.

The streetscape was introduced several years ago but has faced delays, according to District 1 council member Fazlul Kabir’s website.

District 1 council member Kate Kennedy, who ran for the council in part because of her support for the project, said she is excited that it is now moving forward.

The project comes amid ongoing plans to revitalize College Park and make several streets more pedestrian-friendly, according to the city’s website.

Multiple local businesses and restaurants have reached out via email to express their support for the project, Kabir said.

College Park resident Rachel Ortiz said the project is an exciting prospect for her and her two young children.

“I feel like the streetscape would definitely benefit … kids right now that are just desperate to play and desperate to know the diversity of this area,” Ortiz said. “That would be a beautiful thing to have.”

[College Park Metro to close temporarily for construction starting in May]

Jeff Howard, another College Park resident, said he is “very thankful” for the project. Howard and his husband live on Muskogee Street, which will border one end of the streetscape.

“We’re out and about and it’s challenging to find a location that’s more of a central gathering place … so we’re very excited about this,” Howard said.

Mayor Patrick Wojahn said he is also looking forward to seeing the future of the project.

“I’m really excited about the way that this has turned out, all the engagement over the years to make this a reality and excited to see what it’s going to look like in a year,” Wojahn said.