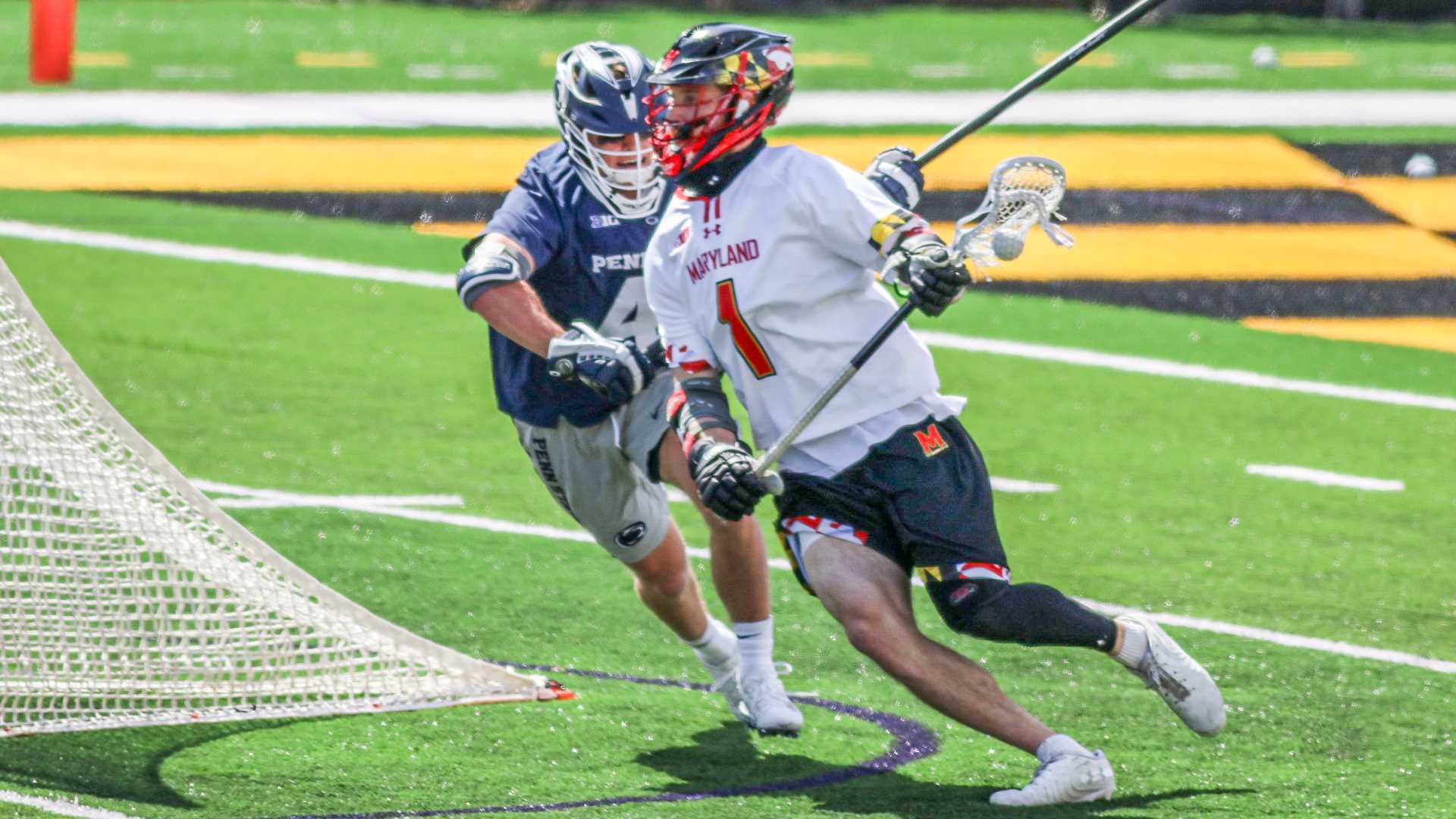 Jared Bernhardt was a freshman in 2017 when Maryland men’s lacrosse legend Matt Rambo set the new Maryland scoring record at 155 career goals. Bernhardt ended his freshman year with 20 goals to his name, so it seemed unthinkable that he could someday break Rambo’s record.

On Saturday, it happened. With under two minutes left in the first half, Bernhardt shimmied past a Penn State defender and flicked goal no. 156 into the cage.

The Nittany Lions had no answer for Bernhardt all day, and the record-breaking goal was the first of Bernhardt’s game-high five scores in the game. Led by the fifth-year senior, the Terps offense exploded once again in a 17-10 win over No. 19 Penn State.

“I was very happy to get the win on senior day,” coach John Tillman said. “It’s an important day for us in so many ways. This senior class has done so much for us, so I’m happy for them.”

And Maryland looked to its seniors early on. The defense, led by senior and Tewaaraton Award finalist Nick Grill, gave up just two goals in the first 15 minutes.

Thanks to the stellar defense, the Terps didn’t fall far behind despite failing to score for the first nine minutes. Senior attacker Logan Wisnauskas commenced scoring festivities with back-to-back goals from 10 yards out.

Wisnauskas reached a milestone of his own with his second goal, tallying his 200th career point at Maryland.

Fellow senior Bubba Fairman scored the goal that gave Maryland the lead at the end of the quarter, a lead that it never gave back. Fairman’s goal began a streak of three-straight unassisted goals for the Terps, as they had success charging the net throughout the game.

Bernhardt outscored the entire Penn State team 3-2 in the second quarter. He opened the frame with the goal that tied Rambo’s record and gave Maryland a five-goal cushion with the record-breaker, but his third goal was the most impressive in terms of style.

With the clock winding down on the half, the fifth-year senior took the ball from midfield to deep in Penn State’s zone, where he rifled a last-second screamer by goalie Colby Kneese. Maryland went into the locker room leading by six, 10-4.

“No one was sliding and it kind of happened really quick,” Bernhardt said. “I was just trying to make a play before the time ran out.”

Three Maryland penalties didn’t stop the No. 3 team in the nation from keeping the lead out of the break. An extra-man goal by Mac O’Keefe got the preseason All-American going, but his three goals in the third quarter were all matched by the Terps.

“We knew it was a matter of time before they’d go on their run,” defenseman Brett Makar said. “We had that senior leadership to reel the defense back in… and we were able to finish strong.”

But O’Keefe couldn’t stop Bernhardt from breaking more records. Bernhardt’s fifth goal gave Maryland a 14-7 lead, and it moved him into second all-time in career points at Maryland – behind only Rambo.

The Terps coasted the rest of the way, allowing Tillman to pull his starters and give some time to his bench. Still, Maryland won the turnover battle and outscored the Nittany Lions in the fourth quarter to secure its seventh win of the year.

“There’s a lot we can build upon and improve and clean up this week,” Tillman said. “It was a good step, and I want the guys to enjoy it for a couple of days and then we’ll be back to work.”