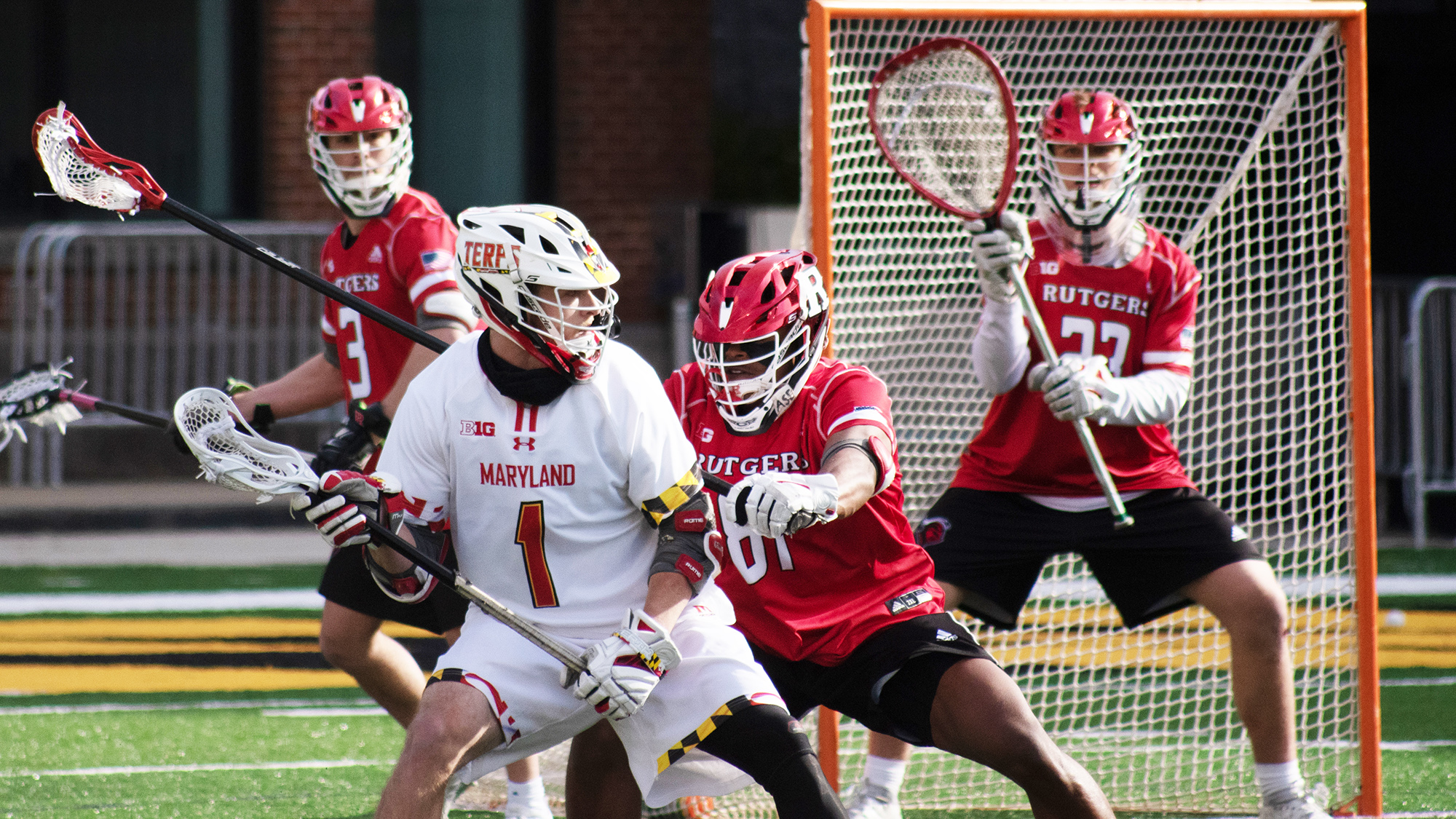 Jared Bernhardt backs up against a defender in Maryland men’s lacrosse’s 13-9 win over Rutgers on March 28, 2021. (Autumn Hengen/The Diamondback)

But the first 15 minutes passed, and so did Maryland’s sloppy play on both sides of the field. Coach John Tillman’s squad outscored the Scarlet Knights, 6-1, in the second quarter, stealing all momentum away from the home team.

In each of the last four games, the Terps have had a quarter when they scored at least five more goals than their opponent. The dominant stretches have been a key factor in sealing wins, which was the case again on Sunday.

“I think in the past, we haven’t always been the best with handling runs and keeping the foot on the gas,” midfielder Kyle Long said. “[The defense] gets stops, and that just gets our energy going and gets our confidence going. We kind of put it together in those moments.”

No. 5 Rutgers is second to Maryland in the Big Ten in most offensive statistics, including shots percentage, goals per game and assists per game. But the Scarlet Knights are ahead in shots per game — and in Sunday’s game, they equaled the Terps after the first quarter.

Coach Brian Brecht’s offense transitions quickly and shoots often, which has helped Rutgers stay undefeated against the rest of the conference. But by the time the second quarter rolled around, Maryland was beating the Scarlet Knights at their own game.

The Terps fired 13 shots in that quarter, converting on 46 percent. Three of their six goals came off Scarlet Knights turnovers.

“That’s what they’re notorious for,” midfielder Bubba Fairman said. “They play early offense, they run transition really well, so just kind of giving it back to them was amazing … so [it was] a huge, huge shift in momentum, and that was kind of what we needed.”

With the depth on Maryland’s roster, a number of players have been key in rattling off long scoring runs such as the second quarter Sunday.

No one has been more important to the team during scoring stretches than three-time All-American Jared Bernhardt.

Bernhardt, with his ability to make plays from behind the cage, had a hat trick in the second quarter alone. His second of the sequence gave the Terps a two-score lead, which is the closest the game would get the rest of the way.

The defensive attention Rutgers gave Bernhardt also opened up opportunities for other players such as Long and Daniel Maltz, who each recorded a goal during Maryland’s run.

“Jared got in a really good groove,” Tillman said. “There were some times when they slid early, and we made the right play, and there were times when they didn’t slide, and he made them pay. That’s one of the things that’s great about Jared is he can be with the ball [or] without the ball.”

Tillman used a timeout toward the end of the first period to weather the Scarlet Knights’ offensive storm. Long scored the first of his two goals out of the break, and the quarter intermission soon followed, giving Maryland some more time to recoup.

That’s when everything started to go right: Justin Shockey won faceoffs, Logan McNaney made saves and the ball went in the net. The Terps went back to the basics.

Then, Maryland exploded with a 6-1 second quarter to secure a regular season sweep of the Big Ten’s second-best squad.

“The game really sometimes isn’t as complicated as we like to make it,” Tillman said. “Guys to get into a flow, guys to start feeling a little bit more comfortable … that kind of gets you going.”