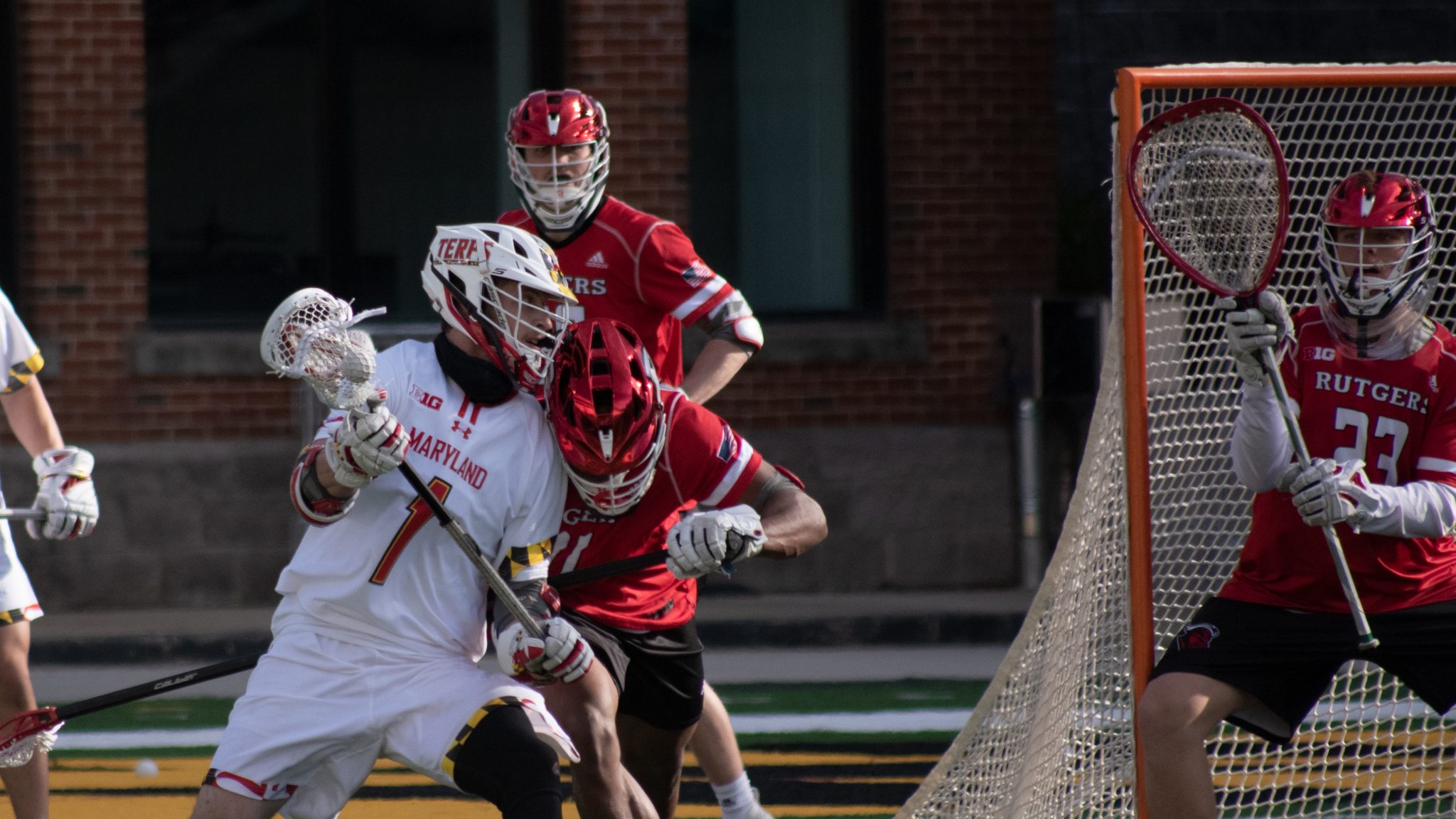 Fifth-year attackman Jared Bernhardt danced behind the Rutgers cage, spun once to his right and dove in front of the crease while nailing the top-right corner of the net.

Bernhardt’s 20th goal of the season cut Maryland men’s lacrosse’s deficit in half, and it would be soon erased all together. It was the Terps’ second goal during a 7-0 run in the first half, which gave them a lead they’d never give up. Fueled by their dominant second quarter display, the Terps rolled to an 13-9 win Sunday afternoon to improve to 6-0 on the season.

“I’m proud of our guys for getting a road win against a really good team,” coach John Tillman said. “They’re just continuing to grind and stick together… We realize there’s a lot more we can improve upon and I’m excited about doing that this week with the guys.”

Maryland struggled to get into a rhythm on the wet turf in Piscataway. Faceoff specialist Justin Shockey lost his first three attempts, giving the Scarlet Knights a lot of possession time early.

They finally cashed in three minutes into the game on a goal from three-time Big Ten freshman of the week Shane Knobloch. The goal put Maryland down to start a game for just the third time in 2021.

Rutgers remained in control for most of the first quarter, adding on two more goals to put the Terps in an unfamiliar position trailing by three. Preseason All-American Connor Kirst was responsible for the third goal, which was his first against Maryland this year.

After a pivotal timeout by Tillman halfway through the quarter, midfielder Kyle Long stopped the bleeding and put the Terps on the scoreboard with an unassisted goal. Knobloch added one more goal in the quarter, but then the momentum completely shifted toward the Terps.

Both teams went four-plus minutes without a goal until Logan Wisnauskas found Anthony DeMaio patiently waiting five yards from the cage, who punched in a top-shelf goal with 11 ticks on the clock. DeMaio’s extra man score began the 7-0 run that Maryland continued into the second quarter.

“They came out hot,” midfielder Bubba Fairman said. ”We found ourselves making a lot of adjustments, slowing things down, talking things through. That kind of led to a better second quarter for us.”

Maryland’s smooth and efficient offense took form in the second quarter, starting with Bernhardt’s diving shot in front of the crease.

Perhaps the biggest highlight of the stretch didn’t even come from an offensive player, however. It came from long stick defenseman John Geppert. In a fabulous display of transition offense, Maryland cleared the ball to Bernhardt, who dumped it off to a trailing Geppert for the score.

The Terps took an 8-5 lead into halftime, and they successfully slowed the game down in the third quarter to hold on to their lead. The teams went back and forth for two goals each until midfielder Bubba Fairman scooped and scored to put his squad up four heading into the fourth.

The Scarlet Knights held an extra man advantage for the first minute of the final frame, and they made the most of it. Attackman Eric Civetti registered a goal 15 seconds in, and they scored again to further cut into coach John Tillman’s squad’s lead at even strength.

Still, as the lead waned, Maryland’s toughness did not. With just under four minutes to go, Long put a big hit on a Rutgers defenseman, forcing a turnover. Wisnauskas scooped it up, and scored from seven yards out to put the Terps up 13-9.

That’s where the score would stand the rest of the way, as Tillman’s squad sealed the deal on its second win over a top-five Rutgers team this year.