Maryland women’s basketball stymied by Texas defense, knocked out of tourney in 64-61 loss 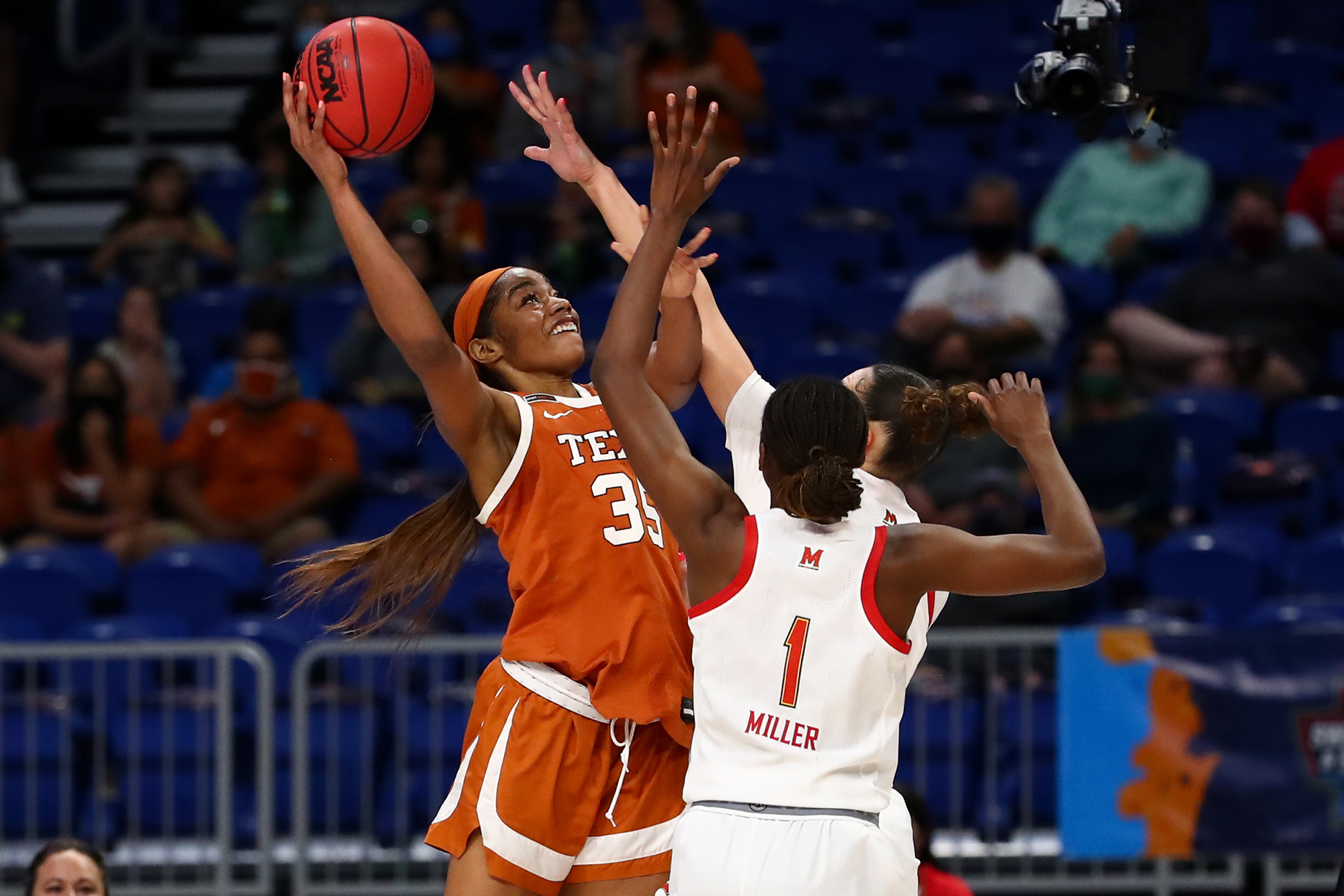 Charli Collier rises for a shot over Diamond Miller during Texas' 64-61 upset win over Maryland women's basketball in the NCAA tournament on March 28, 2021, in San Antonio. (Photo by Justin Tafoya/NCAA Photos via Getty Images)

Katie Benzan squared up for a three pointer, an opportunity to tie the game with under a minute remaining. It wasn’t the easiest shot — there were a pair of Texas defenders around her — but it was one she had made countless times over the course of the year.

After all, Benzan was the best sharpshooter on a team filled with snipers, the nation’s premier three-point specialist who’d terrorized defenses from behind the arc on the best scoring offense in Maryland basketball history.

But Benzan, like the rest of her team’s offense, faltered in the biggest moment. Her three fell short, clanging off the rim like so many Maryland attempts did.

It was that kind of night for the No. 2-seed Terps, who were unable to overcome an uncharacteristically cold offensive performance in a physical 64-61 loss to No. 6-seed Texas that sunk their championship hopes.

Despite the miss, coach Brenda Frese didn’t feel that the shot selection was bad, even though Maryland had plenty of time left before the attempt.

“She’s shown all year, I mean she shoots over 50% from out there,” Frese said. “So yeah her getting a wide open three I’ll take that any day.”

In the fateful fourth quarter, the Terps shot just 35.3 percent from the field and 12.5 percent from behind the arc. They had a pair of turnovers, the latter that ended up costing them the eventual go-ahead points.

[Back from injury, Angel Reese has Maryland women’s basketball at full throttle]

With under a minute left, Ashley Owusu threw a pass to an unsuspecting Mimi Collins. The ball bounced away and right into Kyra Lambert’s arms, who scored an uncontested layup to give Texas the eventual go-ahead bucket.

It was the kind of aggressive play Maryland would deal with all night long, particularly from the Longhorns’ star center, Charli Collier.

Collier didn’t need much space down low, carving out acres of room for herself in the paint. She scored 16 points and snatched 11 rebounds, none bigger than the one she grabbed with the game on the line.

With Maryland holding a slim lead and the clock winding down, the 6’5” center was determined. A layup clanked off the rim, offering a chance for the Terps to solidify their advantage.

But Collier would not be denied, skying to retrieve the miss. In one swift motion, she went back up and finished through a foul, mean-mugging the San Antonio crowd as she did. It would be a key sequence that helped end coach Brenda Frese’s squad’s season.

“There’s just a ton of physicality throughout the entire game,” Frese said. “That tends to wear on you as the game goes on.”

It was an incredibly solid defensive performance for Texas, particularly on the perimeter. It remained physical throughout, blowing up ball screens and harassing Maryland’s shooters, limiting the Terps to just 5-of-22 from behind the arc.

“I think they rushed us quite a bit. Sometimes we had great open looks that we typically make so I think there was a blend,” Frese said. “I think you know their pressure defensively sped us up for most of the night.”

That’s the tournament, a fickle fiend that saw the best offense in Maryland basketball’s history sputter when it mattered the most. On their last offensive touch of the year, needing to rush to start a miracle comeback, Owusu and Miller took too long on the possession, as if frozen in shock by their last game of the season.

It was indicative of a stage that was just a tad too bright, a moment that was a bit too big, a game that was just too high-stakes for a squad that for the large part had never played in the Sweet Sixteen. Before this season, the sophomore pair had never been in the tournament, and it showed when the lights turned on.

“I think you saw, you know, some inexperience today with our team,” Frese said. “…Ultimately they made one or two more plays in the fourth quarter that were the difference.”

One of the veterans on the team, senior Chloe Bibby, painted an optimistic picture, remarking that this loss could be a learning experience for the younger players on the team.

“I mean they’re learning things I just, we’re all still little babies,” Bibby said. “And they’re just going to, we’re going to take from this and we’re going to learn from it.”