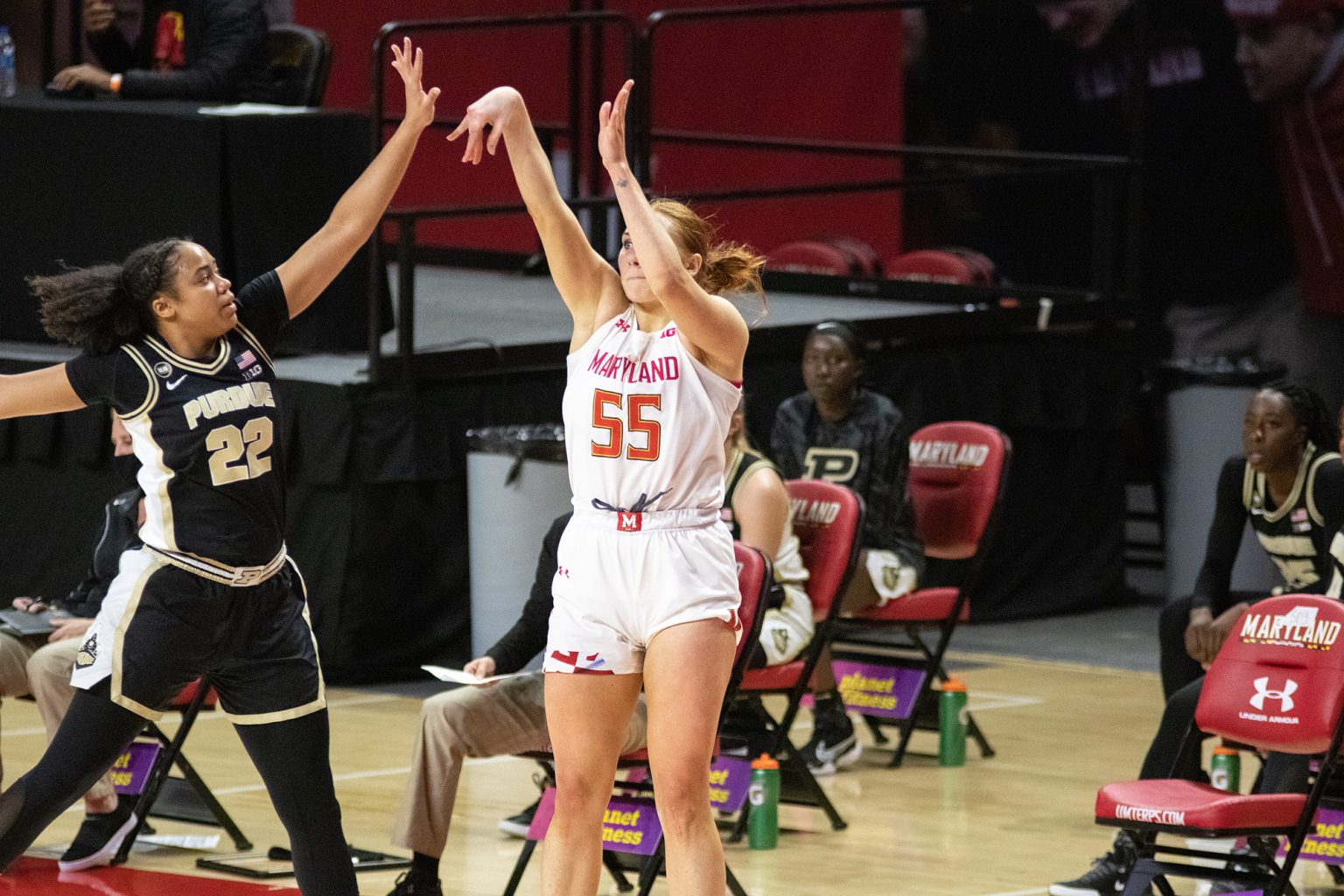 Chloe Bibby read the play perfectly, running through the screen and picking off a pass. Immediately, the senior shifted into full gear, sprinting down the court on the fastbreak.

As a couple of defenders stopped her dribble near the basket, Bibby slowed, drawing them in before reaching around one and throwing a wraparound pass to a driving Faith Masonius — who smoothly finished an open layup.

The pass was indicative of an overall unselfish game from Maryland women’s basketball. The Terps assisted on 15 of their 21 baskets in the first half en route to a balanced and explosive offensive performance that propelled them into the Sweet 16 after a 100-64 win over Alabama.

“I mean it’s a game of basketball, you got to share the ball to get the ball back,” Masonius said. “So once you get that nice pass it’s gonna open somebody else up.”

Maryland’s offense clicked from the start as they piled up the points. The Terps shot 70.6 percent from the field and made 66.7 percent of their three-pointers in a 30-point first quarter.

Early in the second, Bibby jogged off a screen for a three-pointer. Without any kind of robust defensive presence around her, she caught and fired an unrushed three that barely hit the net as it went in.

That came off an assist from Ashley Owusu who dished out a team-high eight helpers. It wouldn’t be the last time the point guard would find Bibby, as she’d bounce a pass into her arms on a fastbreak after faking a shot in the third.

The smart passing plays weren’t limited to assists. The Terps whipped the ball around the court with regularity, stretching the Crimson Tide’s weary defense. The passing was contagious. Forward Angel Reese caught the ball in the post and gave it up to a cutting Diamond Miller, who instantly found Mimi Collins standing under the rim for a wide-open layup.

In the third quarter, forward Faith Masonius made a similar play, saving a ball going out of bounds between a pair of Alabama defenders to initiate a fastbreak with Owusu that ended with a Reese layup.

“Every single one of our players on our team can score, so it’s really just important that we share the ball,” Masonius said. “And if we keep doing that we’re just we score 100 points, you’re seeing it yourself.”

That unselfishness led to a balanced box score for the Terps as five players scored in double digits. Masonius was one of them, scoring a career-high 16 off the bench.

“That’s a championship team right there. If one person is not having a good night you could turn and somebody else is gonna have,” Masonius said. “We got so many different options and so many different assets, so it’s just important that we keep using them.”

Reese displayed an array of post moves, making 8-of-12 attempts, all but one coming from inside the three-point line.

And like the rest of Frese’s squad, she was devastating on the break.

The Terps scored 16 points on fastbreak opportunities, forcing a glut of turnovers throughout the day that they turned into 33 points.

Their average margin of victory in their five postseason games is 30.4 points, a sign of how thoroughly and systematically they’ve dismantled every opponent in their midst. From this point onward, they go into a series of alliterative rounds, but they’ll hope to continue their scoring ways and overall unselfishness as they hunt for their ultimate goal: a national title.

“It’s very important that we come out and punch first and just keep stepping on the gas,” Masonius said. “I mean, we have a slogan, it’s all gas no brakes, we’re gonna come out and step on the pedal, and we’re not letting go until the game is over.