Back from injury, Angel Reese has Maryland women’s basketball at full throttle 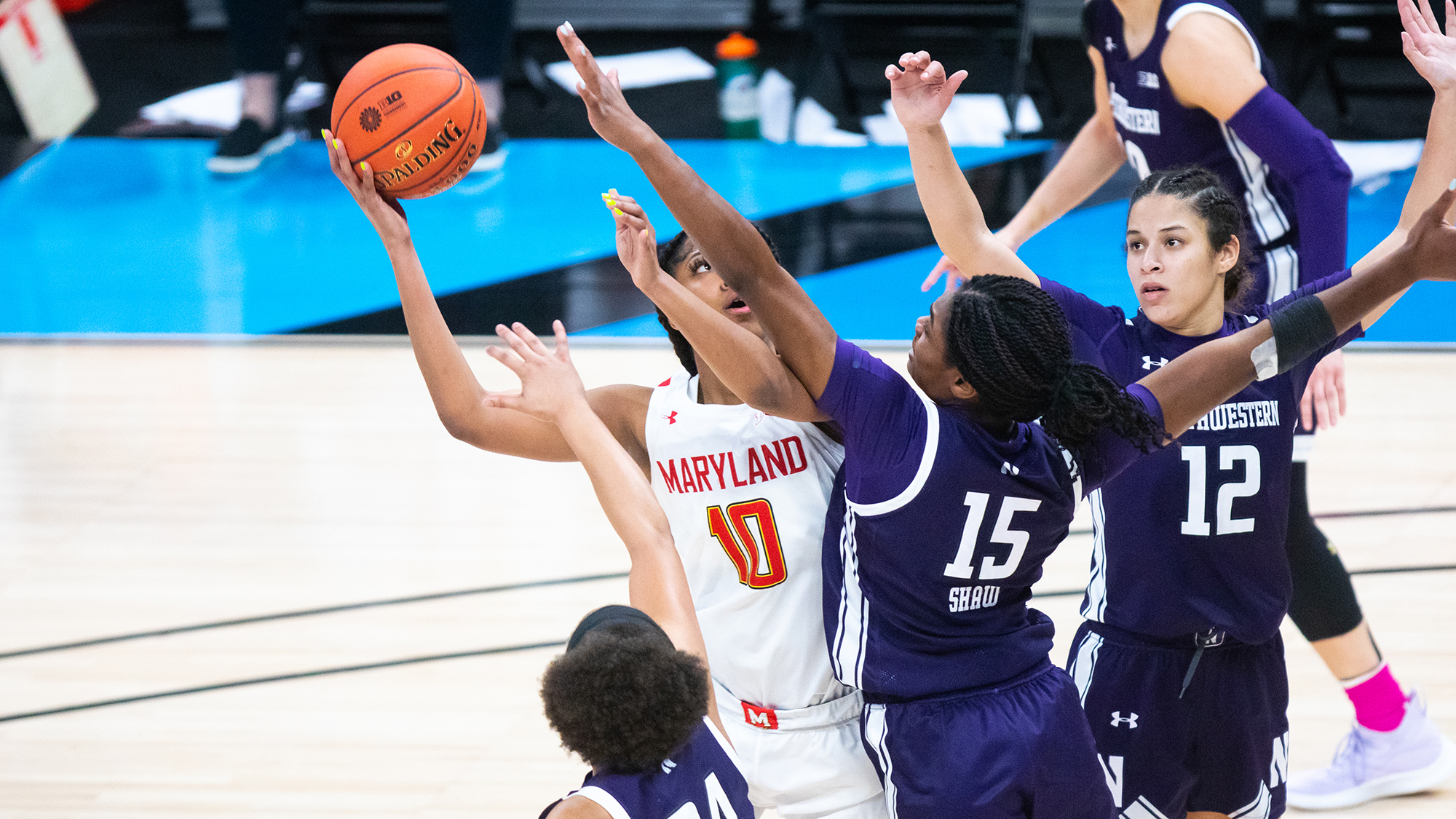 Forward Angel Reese goes up for a layup during Maryland women's basketball's 85-52 win over Northwestern on March 12, 2021 at the Big Ten tournament at Bankers Life Fieldhouse in Indianapolis, Indiana. (Julia Nikhinson/The Diamondback)

With seconds remaining in the first quarter, Angel Reese caught the ball, half the court and an Alabama defender between her and the hoop.

For most bigs, getting the ball that far away from the basket with such little time means ill-advised dribbles that ultimately result in a harried turnover or a bumbling heave.

But not Reese. Instead, the freshman effortlessly dribbled to the hoop before picking up her dribble at the left edge of the free throw line. From there, she leapt across the paint and past her defender, landing right under the basket for an open layup.

It was a jaw-dropping play, one that blended Reese’s guard-like skills with her exceptional athleticism and was part of a performance that showed exactly why she was the No. 2 recruit in last year’s freshman class — and the centerpiece of coach Brenda Frese’s squad heading into the year.

Reese scored a game-high 19 points, grabbed five rebounds, dished out a pair of assists and blocked a shot in Maryland women’s basketball’s 100-64 demolition of Alabama to secure a Sweet 16 berth.

“This was one of our best games, so whatever it takes for us to win and whatever my role is that each game is what I’m going to go fulfill,” Reese said.

It was Reese’s highest-scoring performance since the first game of the season. Since then, the Terps have played 27 games. Reese has only played in 14 of them, as she suffered a foot fracture in December that sidelined her for a large chunk of the year.

The injury took the spotlight off of Reese, one of the nation’s most entertaining freshmen.

She was no longer a contender for freshman of the year awards. National conversations instantly pivoted toward the three-point shooting duo of Iowa’s Caitlin Clark and UConn’s Paige Bueckers.

She was no longer an active player on a Maryland team that was rising up the AP Top 25. Instead, she was forced to be a cheerleader from the bench with a boot on her foot — and not one from UGGs.

She was no longer featured in WSLAM videos touting her as a “certified hometown LEGEND” or saying that she’s arrived in bold letters.

Until she was again.

Angel Reese came through and straight DOMINATED the paint

“I feel more comfortable, just trusting the coaches and trusting our teammates in the game is just falling into my hands,” Reese said. “I feel really confident right now … I feel like I am back.”

Reese’s performance against Alabama showed the growth in her game as well. Her post game is more refined, as witnessed late in the second quarter when she executed a fake spin move to freeze her defender for a layup.

Her passing vision from the post is wildly impressive. She’s no longer forcing up tough shots. Instead, she surveys the defense before picking them apart by firing pinpoint passes to cutters.

“When we can get the ball into the post, especially Angel. She has that eye where she knows when she should take it to the basket or if she gets that double to kick it out,” said Faith Masonius, who was the recipient of one of those passes. “It really opens up our floor, especially when we have those shooters.”

Despite her array of skills, Reese is still just a freshman. Her growth is readily apparent, but she’s nowhere near a finished product — and with Frese there as a coach to help her, there’s no telling what she may become by the time her Maryland career wraps up.

But the Terps aren’t looking that far ahead just yet. Instead, they’re eagerly awaiting their Sweet 16 matchup Sunday night against Texas. The Longhorns pose a unique challenge to Maryland with Charli Collier, the presumptive No. 1 pick in the upcoming WNBA draft. At 6-foot-5, Collier could be a matchup tailor-made for Reese.

“I was just having fun and doing what I had to do. It was just fun,” Reese said. “And I’m happy to move on to the next round with my family.”