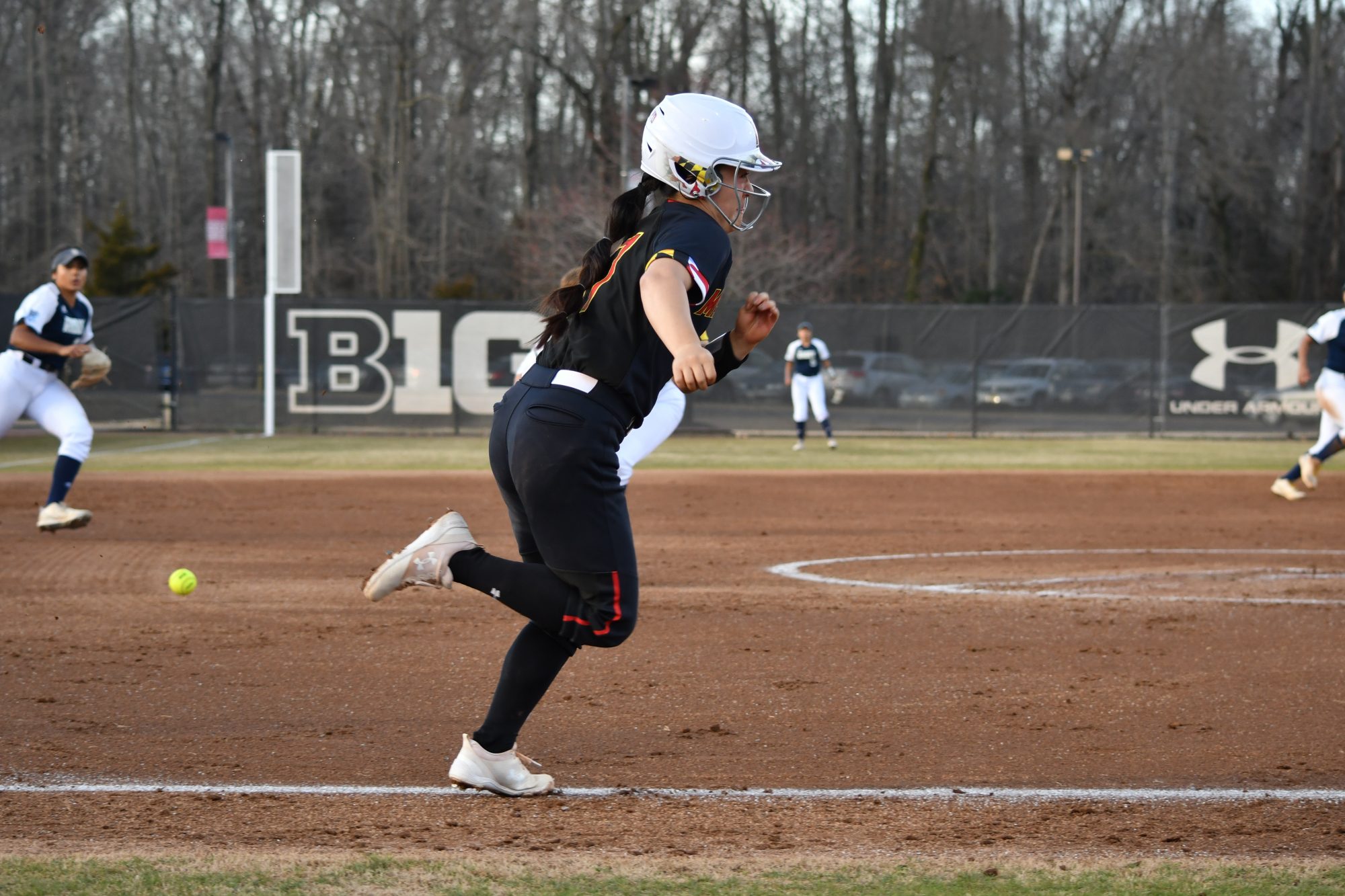 With the bases loaded and only one out in the sixth inning, Maryland softball freshman Michaela Jones stepped into the batter’s box. She watched a ball fly by. Then, a strike. She tried a bunt but didn’t make contact.

Then, she took a swing.

The pop of the bat echoed through Buckeye Field, the ball clearing the left field fence.

Jones’ first career home run — a grand slam — cleared the bases and turned a close contest with Ohio State into a rout. It secured an 8-2 win for the Terps in game one. But they could not keep that energy up for the second game, as the Buckeyes roared to a 13-3 mercy rule win to split the doubleheader.

Maryland and Ohio State were both swinging for the fences in the afternoon’s first contest.

The Buckeyes (8-7) opened the scoring in the bottom of the second. With two down, Kaitlyn Coffman worked a 3-1 count before taking a swing. She smoked the ball over the center field fence for a solo shot and jogged around the bases as her team jumped in front.

And Ohio State struck again in the third frame. With a runner on first, Meggie Otte slammed an offering from Courtney Wyche to left field. The ball rolled to the fence, and a speedy Tegan Cortelletti hustled around the bases. She dove just past Terps’ catcher Katie Dustin, and the Buckeyes were up two.

Maryland cut into the deficit with a solo homer from Haley Ellefson in the fourth. Then, the onslaught in the sixth.

Ellefson started the rally by knocking a single to right field. Next, Megan Mikami took the plate. She popped up into center field, but a sprinting Coffman dove and missed the ball. With the ball beyond the defense, Ellefson sprinted around the bases and slid home to tie the contest, while Mikami ended up on third base.

An error by Ashley Prange brought Mikami home and sent the Terps (7-8) in front for good. Then, Jones’ blast blew the game open. Coach Mark Montgomery’s side cruised from there, racking up an 8-2 victory.

In the second contest, Ellefson continued Maryland’s offensive explosion early. With two runners on in the first inning, Ellefson crushed another home run to send the Terps to a 3-0 lead.

That wouldn’t hold. Ohio State quickly answered in the bottom of the frame, pouncing on Trinity Schlotterbeck for the second straight day.

[After a slew of extra-inning games, Maryland softball hopes to get it done in seven frames]

Otte opened the scoring with a RBI double to center field to score Cortelletti. The quick rebuttal shook Maryland’s defense. Two consecutive fielding errors resulted in two runs for the Buckeyes to tie the game at three.

And after two quick outs in the second, it spiraled for Schlotterbeck. She allowed three straight hits, culminating in another double from Otte to plate two runners and send Ohio State in front for good.

Then, Ellefson took the circle, and it was more of the same. Niki Carver brought Otte home on a single to right-center, and Prange capped the five-run outburst with a home run to put the Buckeyes up, 8-3.

The pounding continued, with Ohio State tacking on three more runs in the third and another two in the fourth. Schlotterbeck and Ellefson combined to allow 13 runs — 12 of which were earned — and 17 hits in four innings while only recording one strikeout, a significant setback from the day’s first game.

And after Taylor Okada grounded out to first in the top of the fifth, it was all over. The Buckeyes emerged victorious over the Terps, 13-3, on mercy rule to end the long afternoon on a high note and split the doubleheader.