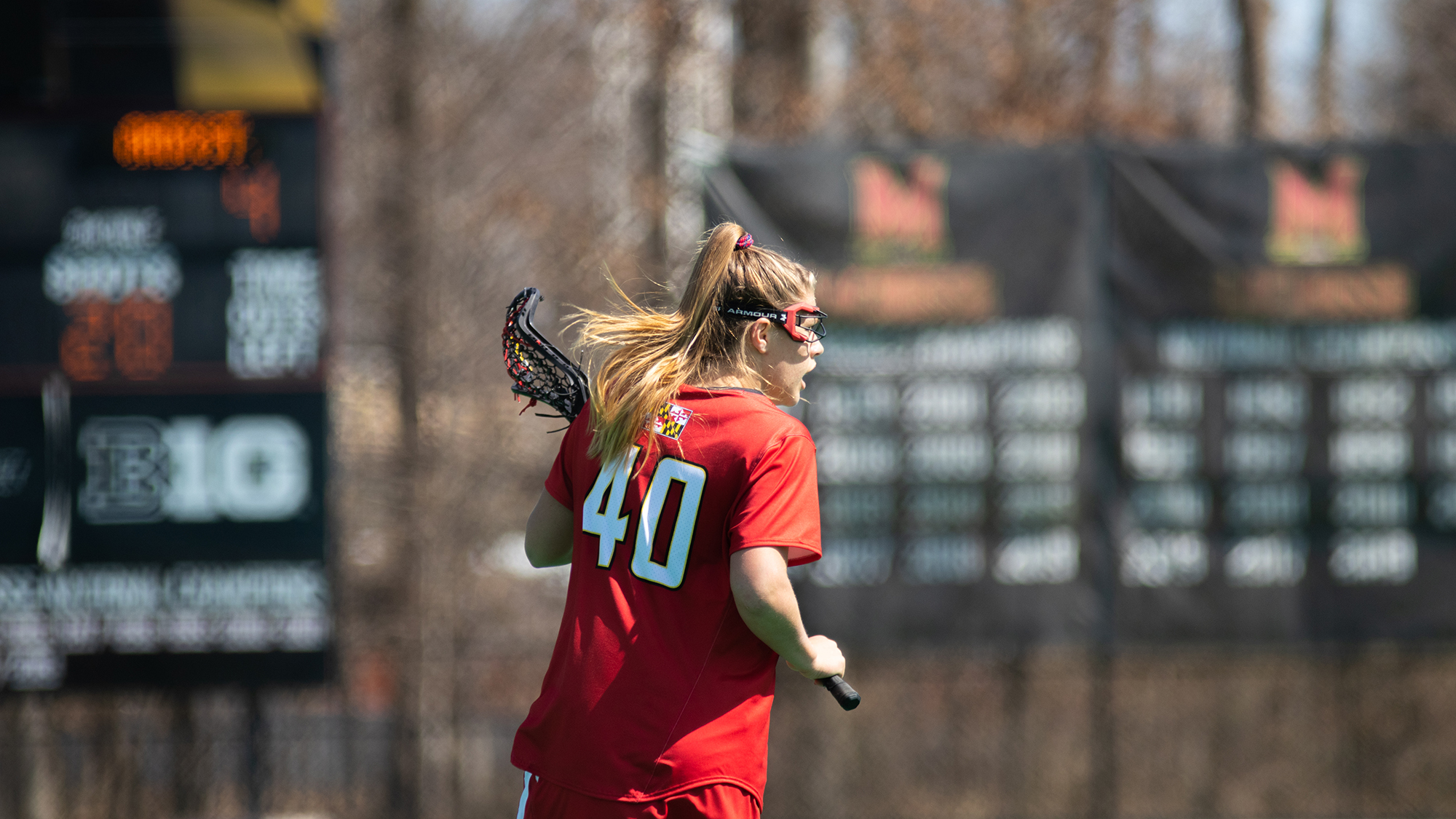 It’s becoming common knowledge that when Hannah Leubecker’s stick goes back, it’s sending a rocket right in the back of the net.

It can be strange to think that, just one year ago, Leubecker’s six-game freshman season ended with two goals on a 22 percent shot rate during limited minutes for Maryland women’s lacrosse — a seemingly unremarkable start to a collegiate career.

However, six games into 2021, not only is Leubecker leading her team to wins, she’s emerging as one of the top attackers in the country. And, in her short time as a starter, she’s setting Maryland records.

“She’s always been someone that has been an excellent goal scorer and is super fast and can beat her defender,” assistant coach Caitlyn Phipps said. “Now finding that within an offense with six other players, and finding that confidence level that has just elevated her games this year.”

Leubecker has thrived in the Terps lineup this season, becoming a go-to player on the offensive end and, often, the centerpiece of the attacking force.

After starting for Maryland in all six of its games this season, Leubecker is the only Terp shooting above 50 percent, with a hulking 28 goals on 61 percent.

Those numbers have put Leubecker well beyond every Terp legend through their first six games as a starter under coach Cathy Reese. It took her just four games to pass recent offensive mainstays in goals, overtaking Kali Hartshorn (12), Erica Evans (13) and even the standout play from Hannah Warther (14) in the shortened 2020 season.

Her seven-goal performance against Ohio State was what pushed her above the rest, passing Taylor Cummings (16), Laura Merrifield (16), Megan Whittle (18) and the former record-holder Karri Ellen Johnson (21).

Leubecker added five to her resume in her second matchup against the Buckeyes setting the new threshold at 28 goals. She also sits among the top-10 goal scorers in the nation.

The performance was also enough to prompt Cummings, the first ever three-time Tewaaraton Award winner, to tweet, “Hannah Leubecker isn’t just a shooter, she’s a finisher. Leading the Terps all over the offensive end right now.”

Hannah Leubecker isn’t just a shooter, she’s a finisher. Leading the Terps all over the offensive end right now 🐢

And Leubecker couldn’t believe it.

Leubecker didn’t have the typical rise that accompanies a top recruit for Maryland. After committing to play for the Terps, she became the first-ever home-schooled recruit under Cathy Reese.

Before Maryland, she began to stand out as a member of the acclaimed Sky Walkers lacrosse club, where she teamed with fellow Terps Libby May, Emily Sterling and Sophia Antonopoulos and then in her chapter of the Fellowship of Christian Athletes, where she competed during spring seasons. The Forest Hill native amassed 344 goals and 84 assists during her four years in the FCA, making her the highest all-time goalscorer in the state of Maryland.

Phipps said it was obvious Leubecker was special after seeing her play for the first time back in eighth or ninth grade. Phipps also compared her impressive technical skills, bubbly personality and endless energy with that of Karri Ellen Johnson — nicknamed Puddy — who Phipps shared the field with at Maryland for two years.

“The first time I ever talked to Hannah, I was like, ‘Oh my gosh, I think this is Puddy coming back to the Terps again,’” Phipps said.

Johnson is one of the most accomplished Terps to ever take the field, holding the second spot on the Maryland career goals list and fourth in points. She was the first player to ever be named to the All-ACC team four years in a row and owns one of the best freshman seasons to date. She was ACC Rookie of the year, racking up 74 goals, 13 assists and 71 draw controls.

Leubecker’s 61 percent shot clip is made even more impressive by her sheer volume of shots. She has taken 46 shots this season, almost twice the number of her next teammate, Grace Griffin who has 25.

No other Terp has taken that many shots in their first six starts under Reese.

Johnson comes in second once again with 34 shots and at a slightly higher rate of 62 percent. Aside from Johnson, every other Maryland player with a higher shooting percentage took fewer than 20 shots.

Across the board, Terp players and coaches said that age does not determine who gets the bulk of the chances at goal, it’s all about taking the chances. Phipps said it is what has made the Maryland attack so dangerous since she was a player.

“They give everybody the green light to go, but hearing it from them made a huge difference to me,” Leubecker said. “Just knowing that I had their confidence, confidence in my teammates. When you miss a shot, somebody encourages you telling you, ‘You have the next one,’ is definitely huge.”

Leubecker showed signs of grabbing the brass ring in game one, taking six stabs at goal and coming up with two goals. But, it was that first matchup against Michigan where she loudly announced her arrival as a starter for Reese’s squad, putting away seven goals.

“When she gets that space and her hands free to shoot, she has that green light because she’s going to make the best of it,” Phipps said.

Maryland has benefited from Leubecker’s aggression in recent weeks. Since her seven-goal explosion against the Wolverines, the Terps have won four straight games — each of which featured at least a Leubecker hat trick.

She even called the game against Johns Hopkins a 9-8 overtime victory, beating out her defender and burying the ball in the corner of the net from just inside the eight meter.

Her impact on both ends of the field has been evident and she’s turned into a devastating threat to opposing defenses.

“I just texted her the other night, ‘I don’t know what you’re eating, but keep eating it because it’s amazing,’” captain Lizzie Colson said. “We need it out there. It’s such a momentum shift for the defense to get those great stops and then to be translated onto the offensive side of the field.”

Phipps said the next level of the game for Leubecker is learning how to face teams that will change their styles to focus on stopping her.

Still, no one has really figured her out yet.

Although she is a sophomore, she still holds three more years of eligibility after the NCAA granted an extra year for players who had their season affected by the COVID-19 pandemic.

That means the Big Ten teams need to get used to Leubecker barreling toward the cage, launching balls past keepers and keeping a smile on her face while she does it.

“This is the start of a four-year career for her,” Reese said. “To come in as a technical freshman here and have done what she has done over six games of conference-only play and to not wait to kind of put those numbers on the board is something that’s really impressive.”