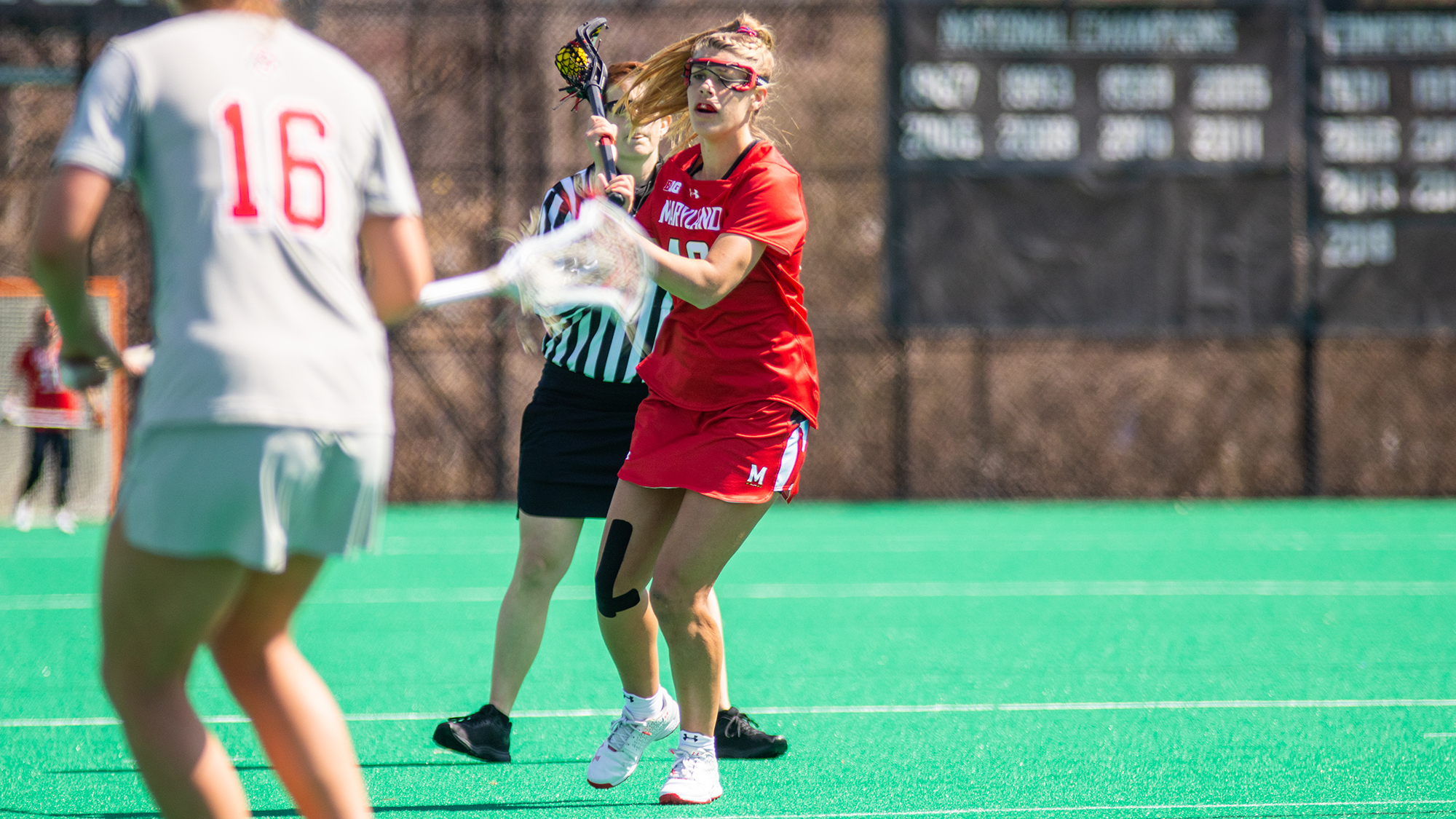 Emily Sterling stepped up in the cage, already having had a career-day in the first half.

As Ohio State tried to push its way back into Saturday’s matchup late in the opening period of play with a free position chance, the young keeper responded with two key saves down the stretch. And those key blocks helped Maryland women’s lacrosse defense hold the Buckeyes scoreless for 16 minutes.

The Terps built on Sterling’s stellar day in net, along with an improved defensive performance to register an 11-5 win over Ohio State — and a fifth consecutive victory.

“Our goalie was phenomenal,” coach Cathy Reese said. “Emily had such a great game. And really was just great on the defensive end.”

It wasn’t the prettiest performance, but the Terps looked an improved team as they reached the midway point in the regular season. Sterling totaled 12 saves, on a .706 percentage, while Lizzie Colson posted eight draw controls, as Maryland dictated the pace of the game en route to a comfortable victory.

Brindi Griffin opened the scoring for the Terps, taking advantage of a free position opportunity. Griffin faked a shot off her mark and slung her seventh goal of the year through the collapsing Ohio State backline.

The Buckeyes responded with a free position of their own, courtesy of Chloe Johnson, who proved to be the biggest offensive threat to Maryland all game.

Most of the offense flowed through free position chances in the early stages of the game. However errant shots and strong goalkeeping from Emily Sterling and Jillian Rizzo were keeping the game tight. Opposed to Thursday’s goalfest in the opening half, both teams were slow to build offensive momentum.

Libby May broke the deadlock, receiving a bullet pass courtesy of Grace Griffin, the team-high eighth assist for the captain.

Then, just like so many other Maryland matchups, Leubecker stepped in.

The Terps’ leading scorer dished out three goals in seven minutes to take over the attacking rhythm Maryland seems to be searching for in the early stages of its games.

“She is such a good shooter, she’s a good dodger, she just plays so quick and has that mental ability to finish on her shots,” Reese said.

Johnson pulled one back amidst the offensive onslaught. The midfielder extended her stick past Lizzie Colson for a shot as she looped around the crease — evading one of the better defenders in the country for a tidy finish.

After Johnson’s second, the Terps locked down on defense. The inexperienced back line has shown increasingly strong performances throughout the season but it was Sterling who was the difference maker, notching 12 saves, a career high.

She was clutch down the stretch of the first half with two definitive saves off of free position chances, holding the halftime score at 6-2.

“I’ve been waiting for her to have this breakthrough game and she was just awesome in the net,” Brindi Griffin said of the sophomore keeper.

Both teams came out of the locker room with a defensive attitude. However, a yellow card on Ohio State’s Jamie Level opened play up for the Terps.

Brindi Griffin was once again the one to start scoring in the half, bouncing one past the keeper with a man-up advantage. With Griffin’s three goals against the Buckeyes, she extended her streak to 27 straight games with at least one shot in the back of the net.

It looked as if the Terps might hold the away side scoreless for the rest of the contest, but Ohio State finally broke its 25-minute long scoring drought with a shot from Ali Beekhuizen.

But Maryland wouldn’t let the Buckeyes get a foothold. Leubecker notched her fourth goal on a free position, just the third conversion of the 12 free position chances the Terps had at that point.

Scoring was stingy for both sides as they traded man-up advantages and chances at goal. Grace Griffin was able to nab one, charging into the attacking area and scoring her 12th goal on the year.

Leubecker grabbed her fifth goal on a free position shot, bringing her season total to 28 goals and putting her amongst the top ten goalscorers in the nation. That score gave Maryland a 10-4 lead with six minutes remaining, an advantage that proved to be unassailable for the Buckeyes.

Maura McGregor and Brindi Griffin traded goals in the final moments of the game, but the Terps had sealed it by then.

So, while Maryland’s offense didn’t enjoy its most prolific performance of the year, the Terps excelled on the defensive side. Behind Sterling’s 12 saves, Colson’s lockdown defense and Maryland’s domination on the draw, it cruised to a victory against another Big Ten opponent.

And with every game, the Terps look more like a team that could do some serious damage come playoff time.

“We were just focusing on one little thing at a time,” Sterling said. “Getting our slides on time, covering the backside, talking on the backside and eventually it just all came together. Today was a huge step for us.”