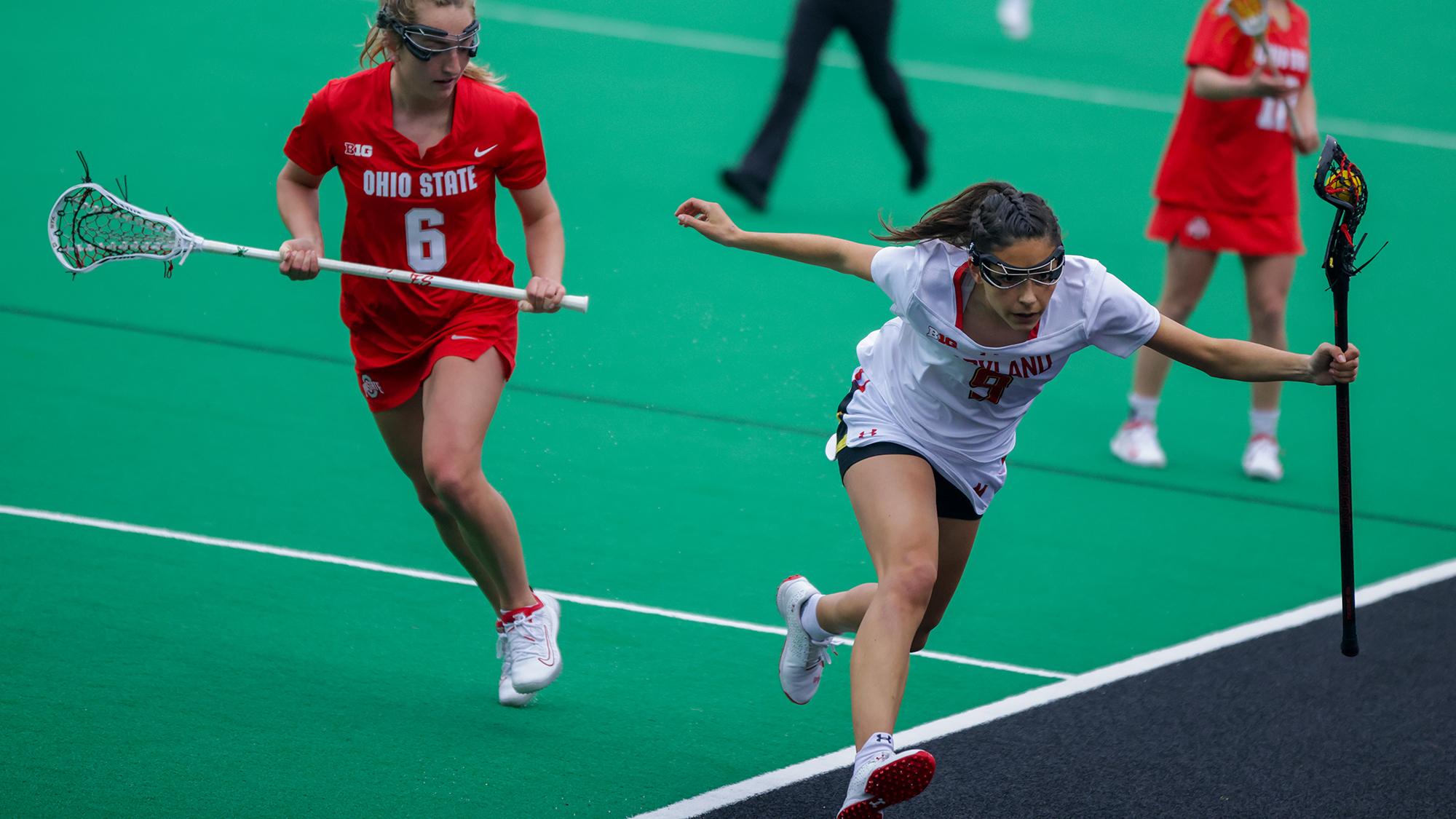 Attacker Libby May dives out of bounds during Maryland women's lacrosse's 14-9 win over Ohio State on March 18, 2021. (Collin Riviello/The Diamondback)

Maryland women’s lacrosse needed to break its scoring drought. After coming out swinging against Ohio State, the Terps had been unable to find the back of the net for the final fifteen minutes of the opening period.

Leaving the locker room just two goals ahead, captain Brindi Griffin stepped up and finished a sitter in front of the opposing net to pull Maryland out of its goal pinch.

That set the table for a dominant second half, spearheaded by leading goalscorer Hannah Leubecker, who tallied the next five goals for the Terps and catapulted them to their fourth straight win, 14-9.

“We tried to put in some things going into the second half and she executed them to a tee and has really just stepped up for the offense this season,” coach Cathy Reese said.

Maryland started the game strong, but let a six goal lead slip in the dying embers of the first half. However, Leubecker put on a clinic in the second half, helping the home side pull away at the Field Hockey and Lacrosse Complex Thursday afternoon.

It was midfielder Grace Griffin who took the Buckeyes by storm in the first half, netting a hat trick in under seven minutes.

Attacker Leubecker, the Terps leading goal-scorer, dodged her way through the backline to open the scoring for Reese’s squad. Grace Griffin followed up with two goals of her own, capitalizing on back-to-back turnovers by Ohio State.

During the opening few possessions, the Buckeyes found space in front of goal, but a Maryland defender was always there to force an errant shot. Attacker Liza Hernandez, one of the top scorers in the Big Ten, eventually got the Buckeyes on the board, converting a clean shot in front of the net.

However, Grace Griffin marched back down the field to complete her hat trick and put pressure back on Ohio State.

“She leads by example,” Leubecker said. “Seeing her put some shots away was awesome.”

Both squads got a boost from their bench, with attacker Victoria Hensh muscling her way to her third goal of the season for the Terps — while attacker Jamie Lasda pulled one back for the Buckeyes, good for a 5-2 Maryland lead.

Then, the Terps took over again.

Libby May, Grace Griffin and Leubecker, Maryland’s top three scorers, found the back of the net as they rode an 80% shot conversion rate through the first 15 minutes.

With a towering 8-2 advantage, its largest of the season, Maryland seemed primed to easily extend its three-game winning streak.

But the Terps wouldn’t find the back of the net for the final 15 minutes of the half.

Maryland’s drought allowed the Buckeyes to claw their way back into the matchup, relying on attacker Nicole Ferrara, who put away two goals in the final 10 minutes.

As Ohio State began closing the gap, rain started to pour. Both teams struggled to adapt in the wetter than normal conditions, juggling the ball more than usual. However, the Buckeyes figured it out first and shrunk their deficit to just two goals, going into the locker room down 8-6.

Attacker Brindi Griffin reopened her scoring account in the half, quickly followed by a typical rush toward the crease by Leubecker to finish her fourth consecutive hat trick, giving Maryland a quick 10-6 lead.

“That put us back, let us all take a deep breath,” Grace Griffin said. “We reset at halftime, going back out and being able to finish and starting off the half that way was really important.”

However, attacker Clare Johnston stopped the Terps in their tracks, working her way around almost the entire circumference of the net to notch a goal.

It became a defensive deadlock as both sides struggled to find and finish clear opportunities. The two teams also had trouble holding on to possession, amassing seven turnovers in 10 minutes.

Eventually, Leubecker broke the ice, converting on a free position she earned trying to push her way through three Ohio State defenders. Leubecker put another mark on her goal tally a few minutes later, barrelling her way to the net for a five-goal advantage.

Hernandez would snap a 13-minute dry spell for the Buckeyes, but it was too late to mount a comeback.

The sophomore scored two more goals, both assisted by Grace Griffin to separate the Terps from Ohio State and give them their fourth consecutive victory.

“We know what we needed to do,” Leubecker said. “It just happened to be me in the spot that was open, it could’ve been anybody.”