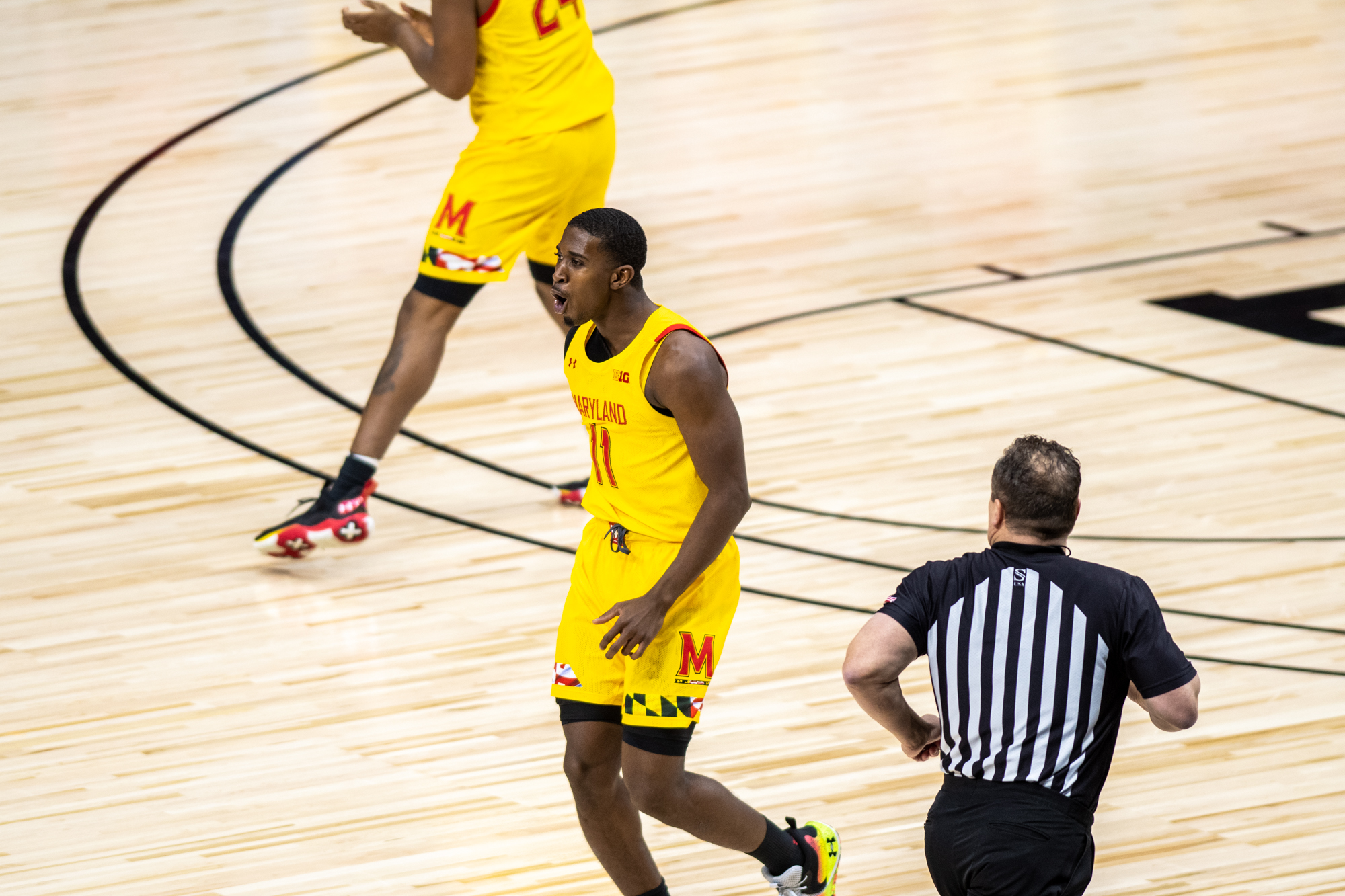 Darryl Morsell celebrates after an early basket during Maryland men's basketball's 79-66 loss to Michigan in the Big Ten tournament on March 12, 2021 in Indianapolis. (Joe Ryan/The Diamondback)

Selection Sunday was a little more stressful than Maryland men’s basketball had expected. The Terps waited nearly 40 minutes to hear their name called, the nerves increasing as one bubble team after another appeared onscreen.

But when Maryland popped up — as a No. 10 seed and the 66th out of 68 teams announced — that tension broke into relief, exuberance and even some tears. After a season of grueling, high-intensity Big Ten games while navigating the COVID-19 pandemic, the Terps were back competing for college basketball’s biggest prize.

And that grind has steeled coach Mark Turgeon’s squad as it enters the postseason prepared and confident for the upcoming slate of win-or-go home contests, starting Saturday with UConn.

“We’re in because of our league,” Turgeon said Sunday. “We had to figure out a way to compete and give ourselves a chance to win, and we really had to change who we were and how we wanted to play to how we had to play to be successful.”

Those midseason adjustments morphed Maryland into a stingy, defense-first team that uses its small stature and quickness to its advantage. While a lack of size has led to struggles against big men like Iowa’s Luka Garza, it has been effective in shutting down top guards like Minnesota’s Marcus Carr.

And the Terps will face the latter against the Huskies, led by James Bouknight. The sophomore missed eight games with bone chips in his elbow, but powered UConn when he was in the lineup. He averaged 19 points per game on 45.3 percent shooting, only scoring in single digits once all season — and exploding for 40 points in a December game against Creighton.

As he has so many times this season against opponents’ best players, guard Darryl Morsell will key on Bouknight for much of Saturday’s contest. It’s a position the senior has relished, limiting Carr to nine points on Feb. 14 and Illinois’ Ayo Dosunmu to an inefficient 9-of-23 shooting day on Jan. 10.

“He’s got that kind of personality … about him because it’s who he is, it’s what he does. He has a lot of pride in defense,” guard Aaron Wiggins said. “He’s already prepared for any defensive task or assignment that he has, and he always steps up for that challenge.”

And Morsell’s side has a reference point for its preparation. Turgeon likened UConn to Big Ten foe and fellow No. 10-seed Rutgers. The Scarlet Knights are a physical squad that runs its offense through their guards and off ball screens.

That style led to a second-half collapse for Maryland against Rutgers on Dec. 14, including a 27-point performance for Ron Harper Jr. But the Terps — and especially Morsell — locked down Harper in the Feb. 21 rematch, limiting him to just one field goal as they knocked off the Scarlet Knights.

Maryland can look back on those contests as it readies for Saturday. Turgeon said the Terps will once again switch its screens to counter the Huskies’ attack while letting Morsell guard Bouknight, adjusting as necessary.

“Our league has ultimately prepared us for anything that we’re gonna see,” Turgeon said.

That will benefit Maryland more than most as the postseason approaches. The Terps have already faced 10 tournament-bound teams, needing to bring their best every evening in order to pull out a victory.

So, when the ball goes up in West Lafayette, Indiana, it will be nothing new for Maryland. Despite the bigger stage, UConn will be just one more battle in a season full of them.

“As a child, you dream of playing in March Madness,” guard Eric Ayala said. “The lights are on, so it’s definitely an experience, and I think guys will step up.”