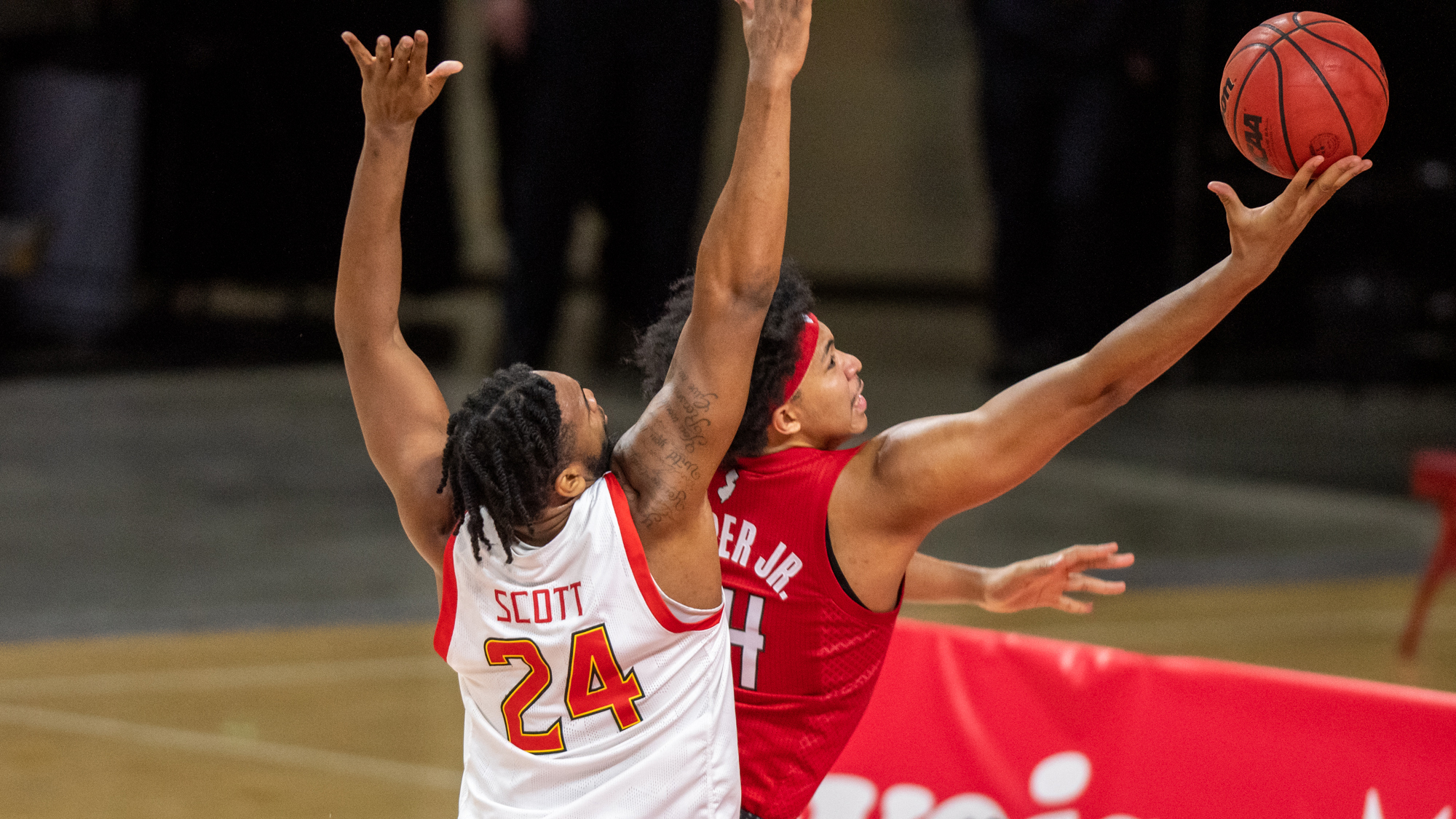 Geo Baker rose and fired, just as he had done throughout the night. He had only played nine minutes heading into Rutgers’ matchup with Maryland men’s basketball, a sprained ankle ruling him out of the Scarlet Knights last three games.

But it didn’t take much for him to get back into the rhythm. The senior had already scored eight points — albeit on 3-of-9 shooting. Still, with Rutgers’ confidence growing and its lead building, it felt like it was only a matter of time before the third-team All-Big Ten selection blossomed into the game.

He leapt and released over Aaron Wiggins outstretched reach. The ball barrelled for the backboard — and caromed in. It wasn’t quite Baker’s plan. But with the Scarlet Knights’ bench flaring with excitement and Rutgers’ lead rising to 10, Baker let out a laugh.

The Terps couldn’t quell Rutgers’ stars in the second half. And after a host of lively performances, it was Steve Pikiell’s side on top, earning a 74-60 win in both teams’ Big Ten season opener.

“They made shots, they banked in shots,” coach Mark Turgeon said. “Defensively in the second half, we weren’t good enough to win this game.”

Maryland needed a spark following its lackluster offensive display against Clemson. Yet, for much of the first half, those wobbles persisted. Turgeon’s squad failed to record a point until the 16:18 mark, clanking its first four shots to start.

And although a Donta Scott layup knocked the Terps out of their scoreless daze, the misses continued to pile up. Hakim Hart, Aquan Smart and Jarius Hamilton combined for 0-of-6 shooting in the first half, while Maryland failed to knock down a three-pointer.

“We had a lot of wide-open looks out there,” Turgeon said. “We just didn’t make some open ones.”

Rutgers, buoyed by Baker’s return, took advantage, showing off the crisp passing and confident ball-handling that has pushed Steve Pikiell’s squad up the national rankings so far.

That skilled passing began to take shape toward the middle of the first half as Jacob Young flew to the rim before lofting the ball up to a streaking Clifford Omoruyi. Omoruyi followed Young’s dish with a slam, pushing Rutgers’ advantage to 10.

It seemed as if the Terps were on the ropes, particularly as the Scarlet Knights’ energy and effort became more and more pronounced. However, Turgeon made a move, opting for a zone defense to neutralize Rutgers’ length and ability to penetrate.

It worked. The Scarlet Knights finished the half shooting a putrid 1-of-11, those free looks at the rim giving way to contested three-pointers.

And while Maryland’s shooting didn’t get much better, that added defensive pressure created some easier opportunities — namely in transition.

Donta Scott picked off an errant pass before releasing Darryl Morsell for a two-handed stuff. Morsell drove to the rim with regularity in the first, causing fits for Rutgers’ defense. The senior scored six points on 3-of-5 shooting to pace the Terps, who — fueled by their growing defensive intensity — began to climb their way back. Scott would soon hit a hook shot, gifting Maryland a one-point halftime advantage, 28-27.

“Our zone worked for us in the first half,” Turgeon said. “We limited them to one shot and they missed some open ones.”

It seemed that the Terps were on the precipice of a signature victory, the sort of win that makes the NCAA tournament committee take notice. Still, Rutgers’ depth and maturity were evident. And come the second half, it was the Scarlet Knights who began to flourish.

Ron Harper Jr. was the focal point. Coming into Monday’s game, the junior was averaging 22.9 points per game, good enough for No. 20 in the nation. And although the Terps limited him to just eight points in the first half, it always felt like that quick release would find reveal itself soon enough.

It started with acrobatics, Harper Jr. flitting into the paint before laying the ball into the basket. He followed that up with a deep three, his confidence oozing as the ball whetted the nylon. The junior extended his arm as the ball fell through the net, mimicking a bow-and-arrow.

Harper Jr. would knock in another three just a minute later. He would score 19 in the second half and 27 in the game, platforming Rutgers’ rapid rise. Maryland’s one-point halftime advantage had long since dissipated as three after three dropped into the net.

“He was a problem,” guard Eric Ayala said. “We would be on a run and he would come down. He played pretty big for them tonight.”

First, it was Harper Jr., then Baker, who finished with 15 points in his first game back from his ankle sprain. Young and Johnson grew into the game, as well, combining for 15 in the second half to hold off Scott and the Terps.

Scott tried to will the Terps back into the contest, notching 20 points — another career-high. The sophomore continued to flash the versatility and consistency that has seen him emerge as the Terps’ most effective scoring threat.

“I just want to win, no matter if I have a fantastic game [or not],” Scott said.

Still, it wasn’t enough for Maryland. After holding Pikiell’s squad to 10-of-30 shooting in the first half, the Terps gave up 47 points. Rutgers made well over 60 percent of its shots in the second half.

And with Maryland’s offense proving unable to create open looks, the Terps floundered, limping to a second double-digit loss in as many games.

“We gotta have a little bit more fun when we play,” Turgeon said. “We’re letting shots affect the way we act.”