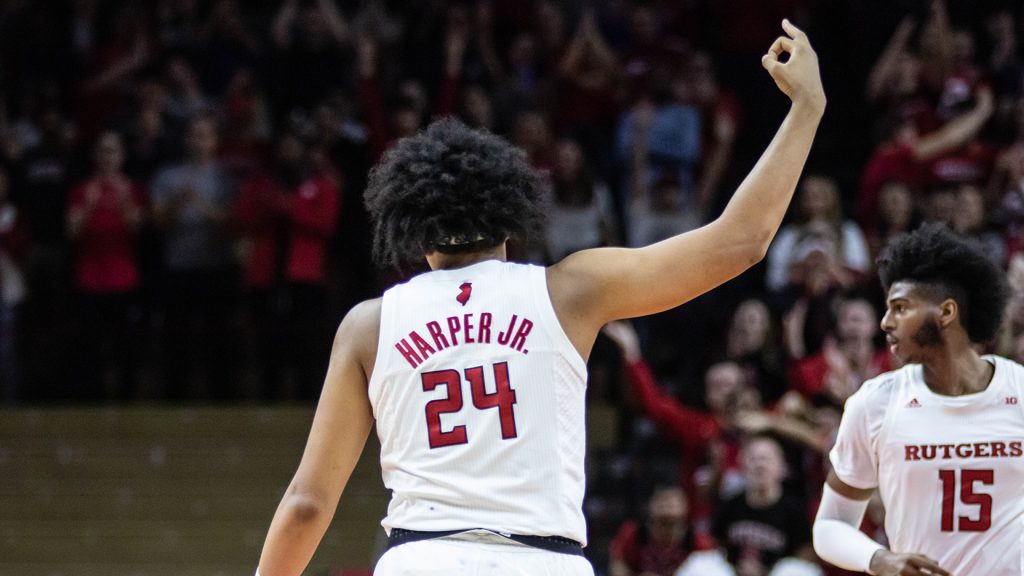 The party was just getting started.

Bodies spilled onto the Rutgers Athletic Center court on March 3, bobbing up and down to the melody of fight songs and rap music. It was senior night and Rutgers had just downed then-No. 9 Maryland men’s basketball 78-67, securing a signature win that inched the Scarlet Knights ever closer to an NCAA tournament berth — its first appearance since 1991.

Nine months later and the roles are reversed. Now, it’s Steve Pikiell’s squad who sit comfortably in the top 25, armed with a triumvirate of high-scoring guards and a robust defense.

And as the Terps prepare for their matchup with Rutgers on Monday night, it’s those guards — Ron Harper Jr., Jacob Young and Montez Mathis — who have been their focus. Much of Maryland’s fate rests on whether it can contain the Scarlet Knights’ prolific perimeter threats.

But that’s easier said than done.

“Those kids play with no fear,” coach Mark Turgeon said. “We’re gonna have to lock in and guard those kids.”

Harper, Young and Mathis had their fingerprints all over Rutgers’ victory in March. Young scored 17 points on 7-of-10 shooting to lead the way for the Scarlet Knights. Mathis added 15 of his own points, including a highlight reel jam over Jalen Smith. Harper was a bit quieter, recording nine points on 3-of-9 shooting. However, the then-sophomore grabbed seven rebounds and drew constant looks from the Terps’ defense, opening up space for Young and Mathis to make their marks.

Those three have stepped up in recent weeks, taking charge of a Rutgers offense that has been without All-Big Ten talent Geo Baker for all but nine minutes so far. Harper is the star, dropping 22.2 points per game, good for No. 20 in the country. The junior has also been efficient, notching 30 points on 11-of-16 shooting against Fairleigh Dickinson and 26 points on 9-of-13 shooting against Syracuse.

Meanwhile, Young and Mathis have emerged as strong secondary scoring options. Young has impressed as both a shotmaker and a passer. He averages 16 points and nearly seven assists a game, including a 17-point, 10-assist display against the Orange on Dec. 8.

As for Mathis, the Baltimore native has established himself as a competitive force on both ends of the floor. The junior has seen his scoring average rise to 16.3, in no small part due to an offseason filled with gym work and drills.

“He had by far his best summer,” Pikiell said. “He’s just got a presence about him now and a steadiness that we need.”

Maryland’s defense is wary of the threat Harper, Young and Mathis pose. And although the Terps have yet to face guards of Rutgers’ caliber, they are cognizant of the type of defensive effort needed to blight the Scarlet Knights’ stars.

“[We] just gotta play hard. Getting through screens and stuff like that,” guard Reese Mona said.

The Terps have been solid on the defensive side of the ball so far, holding opponents to just 39 percent shooting in the opening five games of the season. For all of Maryland’s struggles against Clemson, for example, Turgeon’s squad still held the Tigers to just 13 points in the opening 12 minutes of the second half, providing a platform for the Terps to get back into the game.

And Turgeon has shown a willingness to change lanes partway through games. Whether it be man-to-man, zone or a press, the Terps have a penchant for switching it up.

Ultimately, the onus will be on Maryland’s perimeter defense to perform. If Turgeon’s squad is able to limit the threat of Rutgers’ guards from taking over, the Terps may have enough to get past the Scarlet Knights and secure a resumé-building victory.

“It’s a challenge for us,” Turgeon said. “Our guys will be fired up.”