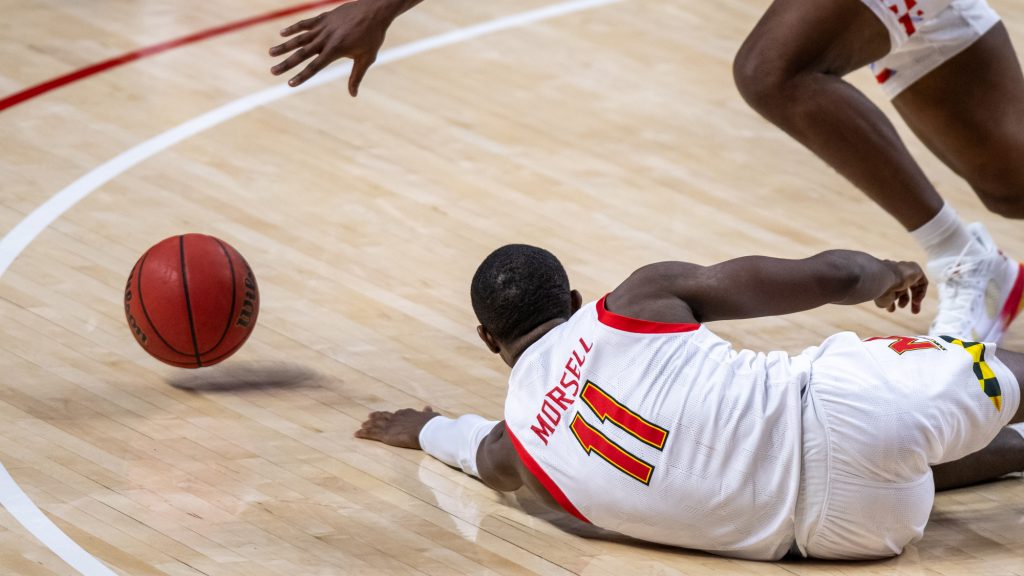 Guard Darryl Morsell reaches for a loose ball after falling down during Maryland's 90-57 win over Saint Peter's at Xfinity Center on Dec. 4, 2020. (Joe Ryan/The Diamondback)

For a fleeting moment, it looked as if Maryland men’s basketball had finally broken out of its stupor. Down just 12 with 7:40 left in the second half, it seemed as if the Terps were on the precipice of a dramatic rally.

That is, until Clemson’s Aamir Simms skied for an errant floater. The Tigers’ big man grabbed it with one hand and laid it softly off the glass, pushing Clemson’s lead to 14.

Seventeen seconds later, the Tigers’ advantage was 17 — Al-Amir Dawes picked off an Aaron Wiggins pass and drifted to the top of the key before launching a three.

It was a series that epitomized Maryland’s toils on Wednesday night. The Terps huffed and puffed throughout, but just couldn’t overcome a putrid first-half shooting display, falling 67-51 in their first road test of the year.

“We weren’t ready to play,” coach Mark Turgeon said. “We missed layups early, we missed free throws early and turned the ball over.”

[Bereft of a star, Maryland men’s basketball is relying on its depth]

There was a sense of optimism brewing when Maryland arrived in Littlejohn Coliseum. The Terps entered Wednesday’s game with a top-15 offense per KenPom, fueled by efficient shooting and valuable scoring depth.

That optimism — and hot shooting — washed away quickly. Maryland missed five of its first six shots, falling behind 7-2 early. Clemson’s advantage would continue to swell, its defense proving stout as advertised. The Terps committed 10 turnovers in the opening frame as they struggled to find a rhythm.

Turgeon’s squad combined to hit six shots in the first half, with no player scoring more than three points in the half. Darryl Morsell air-balled a mid-range jumper, clapping in frustration at the lack of a call. Aaron Wiggins was held scoreless, still not looking 100 percent after suffering an elbow injury last week.

Even bright spots like Hakim Hart and Jarius Hamilton sputtered, taking five shots combined in the opening 20 minutes. The contrast between the high-potent, up-tempo style of play that paced Maryland in its opening four games was stark.

And with its defense continuing to neutralize the Terps’ threat,  the Tigers’ offense came to life. Spurred on by its impressive defensive showing, Clemson was prolific, knocking down six three-pointers. Eventually, that five-point edge that signaled Maryland’s languid nature opened up, eventually bubbling into a 23-point halftime advantage.

“We couldn’t get a shot going in the first half,” guard Eric Ayala said. “It affected us on the defensive end.”

It couldn’t get much worse for the Terps. But, for a brief moment, they showed some fight. After shooting a paltry 26.1 percent in the first half, Maryland hit a much stronger 51.9 percent of its shots in the second period.

Donta Scott led the charge, knocking down a mid-range jumper to set the pace early. The sophomore followed that up by rattling home a three, cutting the Tigers’ lead down to 18.

Scott pulled up from three again about two minutes later, sparking a 7-2 run which brought Maryland within 12.

“Donta played with a lot more toughness in the second half,” Turgeon said. “He’s been arguably our best player in the last two games.”

But just as it seemed like Maryland was on the cusp of mounting a dramatic comeback, Clemson pulled away. Simms and Dawes combined to push the Tigers up 18. Their lead would grow once more, with Dawes and Nick Honor cashing in transition threes.

And the Terps couldn’t recover, their first-half offensive woes dooming them in the second. Now, with a matchup with Rutgers on the horizon, Maryland is left to pick up the pieces of a dismal showing in its first true road test.

“We gotta respond,” guard Darryl Morsell said. “Big Ten play coming up, we definitely gotta get ready for that and I think this game opened our eyes to it.”