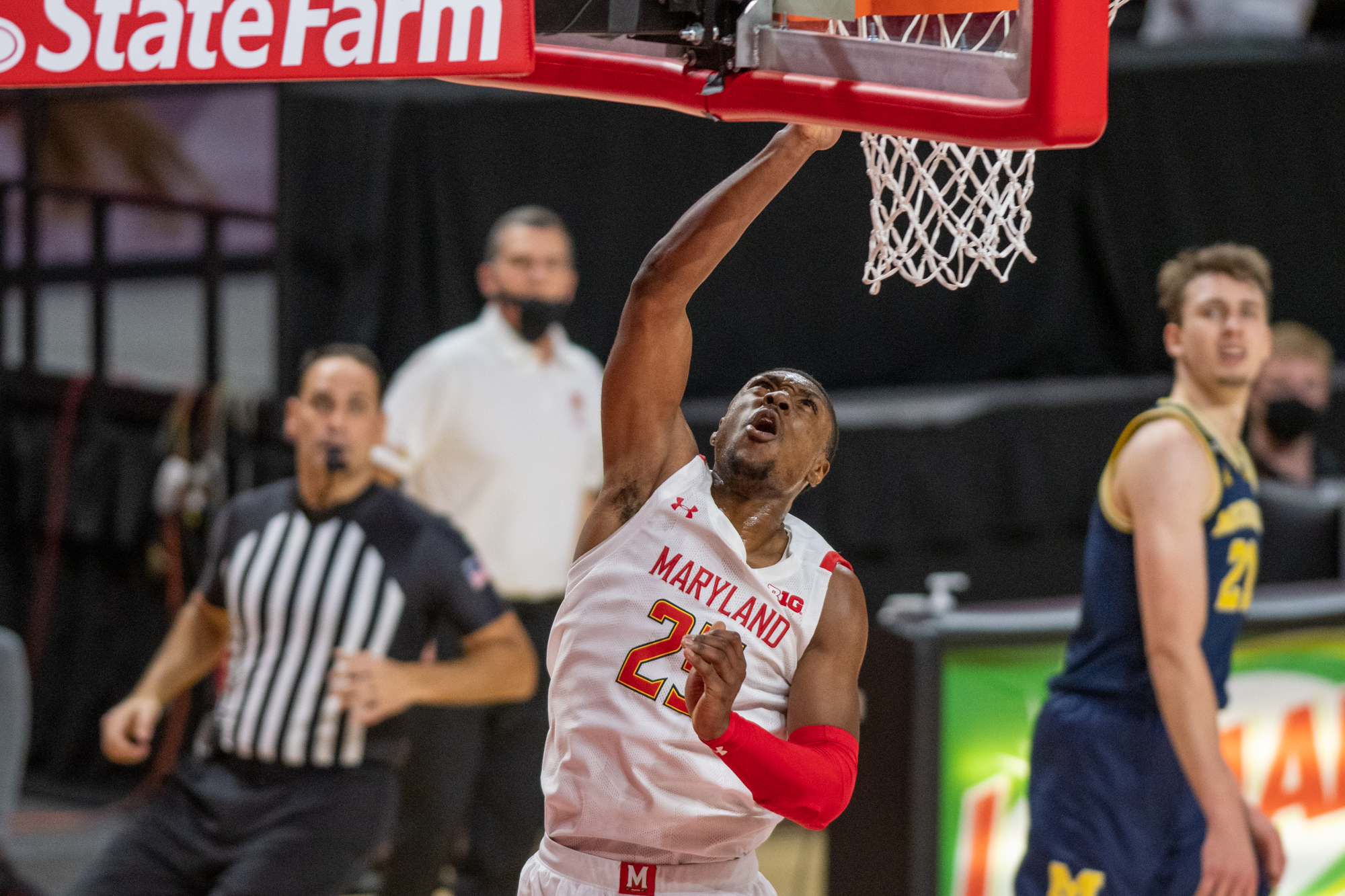 Myles Johnson looked to back down Jairus Hamilton, imposing his will on the smaller Maryland men’s basketball forward. Johnson’s Rutgers squad was down eight with six minutes remaining and needed points as its offense sputtered.

But Hamilton locked him up, and Johnson picked up his dribble, trying to pass out of it. The ball found skin, though. Hamilton knocked it down, and Aaron Wiggins scooped it up. Seeing Darryl Morsell streaking down the floor, Wiggins flung a pass to the Terps’ senior.

Morsell finished with authority, a four-point swing that helped Maryland keep its momentum as the clock wound down. That defense-to-offense transition was present all Sunday for the Terps, who gritted past the Scarlet Knights, 68-59.

“To control it the way we did with our defense and then control it with our motion offense was really the way we have to play to be successful,” coach Mark Turgeon said.

Johnson sent Rutgers (12-9, 8-9 Big Ten) in front early, the 6-foot-11 center taking advantage of a size mismatch over Donta Scott, and outmuscling him to the hoop for two stylish scores. He got help from Geo Baker, who followed a smooth finish at the rim with a confident deep three, sending the Scarlet Knights to an early five-point lead.

But that would be Rutgers’ biggest edge all afternoon. Scott answered Baker’s deep shot with a dagger of his own, while Morsell worked to the rack to cut into the Scarlet Knights’ advantage.

And after a Jacob Young jumper, Maryland (14-10, 8-9) locked down on the defensive end. Turgeon’s squad pushed Rutgers deep into the shot clock, doubling Johnson and limiting his effectiveness down low. Shots from the outside fell short, and the Terps mucked it up inside so any drives to the paint were nullified by a wall of black shirts.

On the rare occasion the Scarlet Knights found space, they would lose the handle or make one too many passes, coughing the ball up eight times in the opening 20 minutes. That allowed Maryland to go on an 18-6 run across the final 12:26 of the half, with Rutgers making just two field goals in that stretch.

And as the Terps carried an eight-point advantage into the second period, the Scarlet Knights came out of the locker room with more urgency, but nothing to show for it.

Caleb McConnell pickpocketed Ayala and took it the other way, an easy bucket within reach. But the layup attempt only found air, and Maryland carried it back up the court, where Wiggins coolly drilled a three to give the Terps a double-digit edge.

Montez Mathis then found himself wide open from long range, only to miss the basket entirely. A few possessions later, he threw it away to Ayala, who popped a three of his own to push Maryland’s advantage to 14. It was part of 20 points off 15 turnovers on the afternoon for Terps.

“It kind of set the tone for how the rest of the game was gonna go,” Wiggins said. “We were able to come out, get a couple stops, execute on offense. It helped lead to the win that we got.”

Even as Maryland’s offense waxed and waned, Rutgers only mounted one sustained charge. Baker sparked the 11-2 run with his second three of the contest, Clifford Omoruyi kept it going with a one-handed throwdown over Hamilton and Mathis capped it with a pair of free throws, cutting the deficit to six.

But the Scarlet Knights would get no closer, their ace Ron Harper Jr. silent as Morsell slammed away the spurt. Harper, who exploded for 27 points against the Terps last time out, was absent nearly all afternoon, hitting just one field goal — with 2:29 to go.

And a spate of clutch free throws sealed a nine-point win for Maryland, those foul shots completing a stifling performance against one of the Big Ten’s better programs.

The win at the RAC was the Terps’ fourth straight — painting a sharp contrast to the team that got thrashed by Rutgers in mid-December. This performance felt complete, one with physical defense, timely offense and cool-headedness down the stretch. One with hustle, smarts — and, eventually, results.

And one that makes Maryland’s postseason credentials all the more convincing.