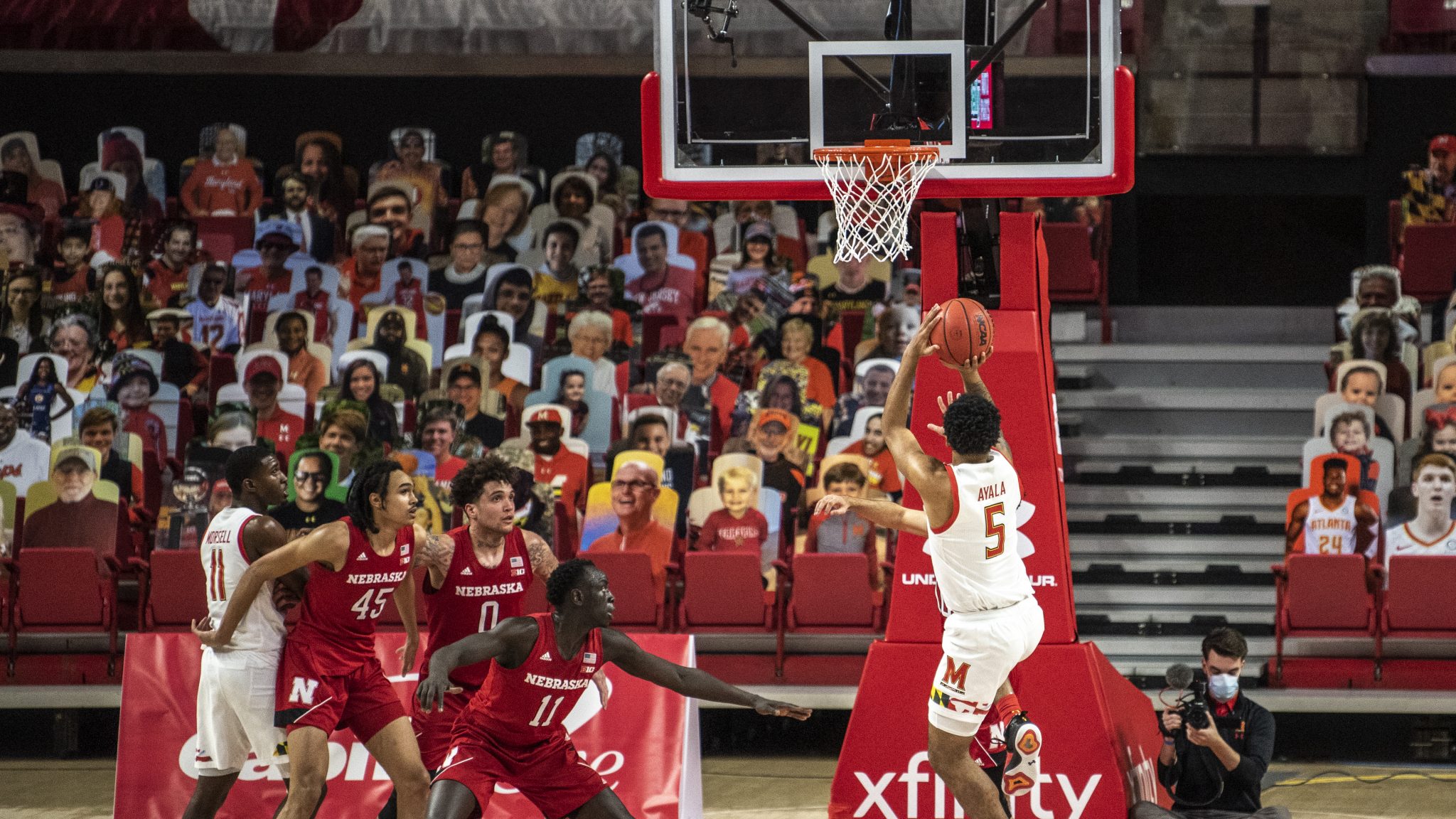 It was déjà vu. Eric Ayala rolled off a ball screen and found himself all alone at the top of the key, waiting for a pass. When it came, he easily drained the three to push Maryland men’s basketball to a 12-point lead.

Just one possession earlier, Aaron Wiggins found himself in the same situation. And just like Ayala, he delivered for the Terps.

That back-to-back was just one of many on the evening for Maryland, as Nebraska had no answer for the tantalizing tandem. They pushed the Terps to a 79-71 win Wednesday evening, completing a two-game sweep of the Cornhuskers.

Unlike the night before — when the team was plagued by turnovers — Maryland’s offense showed life from its opening possessions. Wiggins hit a three off an inbound, and a minute later, Darryl Morsell stole a Dalano Banton pass and took it the other way for a layup.

And the buckets kept falling, especially from deep. The Terps shot 48.4 percent from the floor and drilled eight threes in the first half, the pace blistering and the shots falling in bunches.

Wiggins and Ayala answered Nebraska scores with threes of their own. An 8-0 run with buckets from Galin Smith, Hakim Hart and Jairus Hamilton turned an early three-point deficit into a five-point advantage.

And after the 10:00 mark, Wiggins and Ayala took over, providing all the offense the rest of the period. Two rapid-fire threes stretched Maryland’s lead to seven, and the two once again nullified Cornhusker threes with buckets moments later. Ayala closed the half in style, nailing a three and a fadeaway in the last minute as part of a 17-point effort in the opening 20 minutes.

“Our ball movement, our team movement [was much better],” Turgeon said. “The better we get as a team, it opens up more opportunities for [Ayala] and [Wiggins] to do what they can do.”

But similar to Tuesday evening, Nebraska (5-14, 1-11) hung around for a while. A 6-0 run from Lat Mayen, a pair of threes from Teddy Allen and contributions from Banton and Shamiel Stevenson kept the Cornhuskers within seven at the intermission.

Banton kept the pressure on the Terps in the opening stages of the second half, two quick shots from deep closing Maryland’s lead to three. And yet again, Wiggins and Ayala had the response.

Working off their ball screens, both found themselves wide open at the top of the key on consecutive possessions. And the two each cashed in, the smooth strokes elating the Terps’ bench and sending their lead to double digits.

And Maryland (13-10, 7-9 Big Ten) did not look back. Hamilton stripped the ball and coasted to the hoop, the noise rising from his teammates until they roared when it dropped through and he was fouled.

Smith then scooped an errant pass from Allen and found Morsell all alone, the lay-in falling through to allow the senior to cross the 1,000-point plateau in his college career. He’s the 56th player to reach that mark in program history.

“Being able to score 1,000 points for my hometown state school, it’s a blessing,” Morsell said.

The advantage kept building, Nebraska firing miss after miss. And once more, Wiggins and Ayala matched each other, deftly dropping dimes on consecutive possessions to both reach 22 points. It tied a career high for Wiggins.

And although the Cornhuskers made things interesting late, Ayala sealed the contest with two free throws, pushing him to a career-best 24 points.

So, the Terps picked up another win, dispatching Nebraska for a second night running. It was a more flowing contest than the prior evening, one demarcated by Ayala and Wiggins’ jump shots rather than erratic turnovers.

But as the final buzzer sounded, Maryland proved it could win either way — adding another vital victory in an unpredictable season.

“These wins … we felt like we really needed them and were pressed to get them,” Wiggins said. “Guys were locked in, and we were ready to go.”