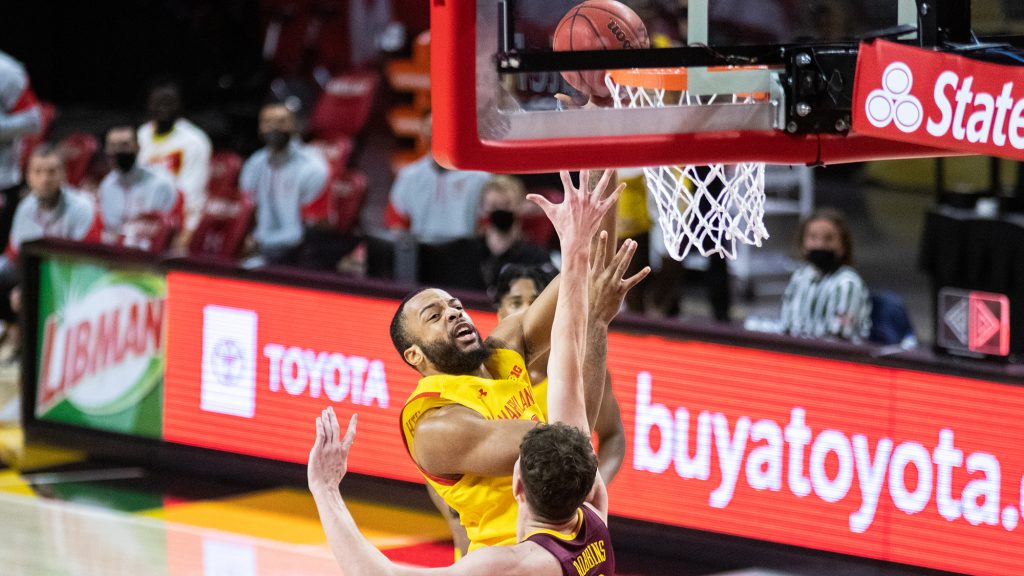 Galin Smith was, at least on paper, in an unfavorable matchup. Smith, Maryland men’s basketball’s biggest player on the floor, had the ball down low and was sizing up Minnesota’s Liam Robbins, who is three inches taller.

That size disadvantage has hurt Smith in previous games, and he entered Sunday’s contest with the Golden Gophers averaging just 4.3 points per game. But the senior didn’t give up the ball. Instead, he backed Robbins down, turning around in the paint for a hook shot that fell through, extending the Terps’ lead to 16.

And on the other end, Robbins found himself in a similar situation, matched up with Smith. He tried the same move his counterpart had pulled off just seconds earlier, but it didn’t work. Smith stuck with Robbins and rejected the shot attempt, sending his teammates back to work on offense.

Smith’s efforts shined through against Minnesota, leading to a breakout performance that helped Maryland pick up a critical win. He provided a crucial low-post presence for the Terps — something they have lacked all season.

In a league filled with dominant bigs — Kofi Cockburn at Illinois, Hunter Dickinson at Michigan, Trevion Williams at Purdue — size and physicality down low is crucial. Maryland does not have that. Its two options larger than 6-foot-9 Smith — Chol Marial and Arnaud Revaz — have barely played. And when those two find rare minutes on the court, they’re often overmatched.

So Smith, undersized at his position, has been tasked with corralling some of the Big Ten’s best low-post players. And Robbins was his latest assignment.

But thanks to Smith, Robbins had his quietest game of the season on Sunday. He could not get open, and he was forced into numerous bad looks. On the occasion Robbins took a shot, all but one missed the mark.

“All those matchups, I take serious, I take personal every night,” Smith said.

And Smith turned that defensive effort into offensive production.

He was efficient with the ball, picking up 10 points, five rebounds and a team-high four assists. Smith seemed to have no trouble driving to the hoop, something Maryland’s undersized lineup has struggled with all season.

On the rare occasion he found himself trapped or double-teamed down low, Smith became a playmaker, finding Aaron Wiggins, Eric Ayala and Donta Scott through a thicket of defenders as they rained threes.

“You could tell that he was just locked in, he was ready to make plays for our team to win,” Wiggins said. “That’s really good for us when we have his post presence and he’s also making the right plays for our team.”

And that more impactful post presence will be critical for the Terps as the regular season nears its conclusion. Maryland has let opposing big men take control in games this season, giving the Terps’ opponents easy points on most possessions.

But Sunday’s performance established Smith as a reliable option down low, the type of player Turgeon envisioned when he secured Smith’s transfer last May. His tenacity could keep opposing bigs in check, allowing Maryland to remain competitive in tight contests.

And Smith’s effort has given the forward more confidence to keep blooming into the impact presence he knows he can become.

“I definitely feel more comfortable out there, and a lot of that is coming from my teammates,” Smith said. “With that, I just take it and run with it. That lets me know that I can go and play my game and be comfortable.”