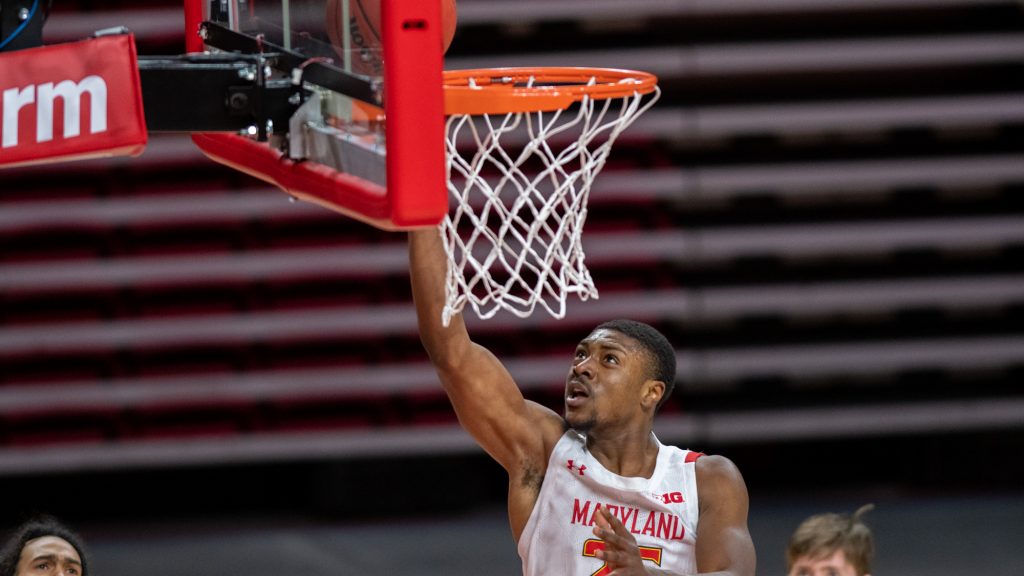 The whistle blew — much as it had all evening — and Eric Ayala looked skyward. The Maryland men’s basketball guard had just traveled, and he knew it, too.

With Nebraska down one, the Terps could ill afford mistakes like that if they wanted to put away the pesky Cornhuskers. But, fortunately for Ayala, he was bailed out on the other end. Thor Thorbjarnarson’s layup attempt rimmed out, and Jairus Hamilton sank a jumper to give Maryland some breathing room.

The Terps committed a season-high 17 turnovers Tuesday evening, the sloppy play allowing Nebraska to hang around until late. Maryland eventually pulled away for a 64-50 win.

“That was a grinder,” coach Mark Turgeon said.

The Terps made several clumsy errors throughout the first half, allowing the Cornhuskers to keep pace. Maryland (12-10, 6-9 Big Ten) entered Tuesday’s contest as one of the more sure-handed teams in the country, averaging 11.2 turnovers per game.

But the Terps coughed it up 10 times in the opening 20 minutes. Aaron Wiggins skied a pass over Hakim Hart’s head. Darryl Morsell fired one right into Trey McGowens’ hands. Donta Scott found himself trapped in a double team, unable to pass out. And Morsell and Scott each slipped and lost control of the ball while trying to drive the lane.

While those mistakes limited Maryland’s offensive chances, Nebraska (5-13, 1-10) only capitalized once, a drive to the hoop from McGowans briefly giving the Cornhuskers the lead partway through the frame. That allowed the Terps to never fall behind by more than five.

And when Maryland maintained possession, its offense was largely effective. Hamilton found himself wide open from three after a Galin Smith shot was blocked and ended up in Reese Mona’s hands. He then popped two more from deep as part of an 11-point effort in the first half.

“I knew this was a game where I had a lot of opportunities coming in, and so I just really wanted to take advantage,” Hamilton said.

Nebraska stayed in it with six three pointers in the opening period, two apiece from Teddy Allen, Dalano Banton and Lat Mayen.

As the teams traded leads, Morsell gave the Terps a spark heading into the break, drilling a half-court buzzer beater to put his squad up four. That shot whipped a previously dull Maryland bench into a frenzy, and the Terps looked to carry that momentum into the second half.

But a Wiggins turnover on the new period’s opening possession signaled it would be more of the same choppy play. Ayala lost control driving to the hoop, Hart threw it to a waiting Cornhuskers’ defender, Smith had the ball stripped away while attempting a dunk and Wiggins had two passes knocked down and stolen.

“It’s too many,” Turgeon said. “We just gotta be better with the ball.”

Meanwhile, the fouls piled up, and Nebraska entered the bonus with 9:03 remaining. All of that prevented Maryland from extending its lead.

However, the Cornhuskers couldn’t take advantage.

Nebraska shot 8-for-28 in the frame as part of a lowly 18-for-54 effort Tuesday evening. The Cornhuskers only briefly tied the game but never pulled in front. The Terps would occasionally have a shot find twine, including a long two from Hamilton and a gritty lay-in from Ayala.

For most of the second half, Maryland could not put Nebraska away. But then, as the game entered the stretch, Wiggins took over.

First, an and-one to put the Terps in front for good. Then, three drives to the lane, each one ending with the ball in the net. Wiggins finished with a game-high 21 points and 11 rebounds, his third double-double on the season. It’s the fifth time in the past six games Wiggins has scored at least 17 points.

“It was a couple different mismatches,” Wiggins said. “It was just about trying to beat the person in front of us, getting into the paint and make plays for others.”

And his teammates responded, too. Maryland closed the contest on an 18-6 run across the final 7:14, grinding out a double-digit advantage that would ultimately be the final mark.

Though the Terps faltered at times, and didn’t reach their best basketball until the clock started to dwindle, they did enough to pull away. Despite the many turnovers, the home side was able to run out victors on the night.

And it’s those wins, that ability to get a result when they don’t play their best basketball, that Maryland will perhaps treasure the most.

It just can’t happen every night.

“We gotta be a little bit tougher mentally to make the right plays,” Wiggins said.