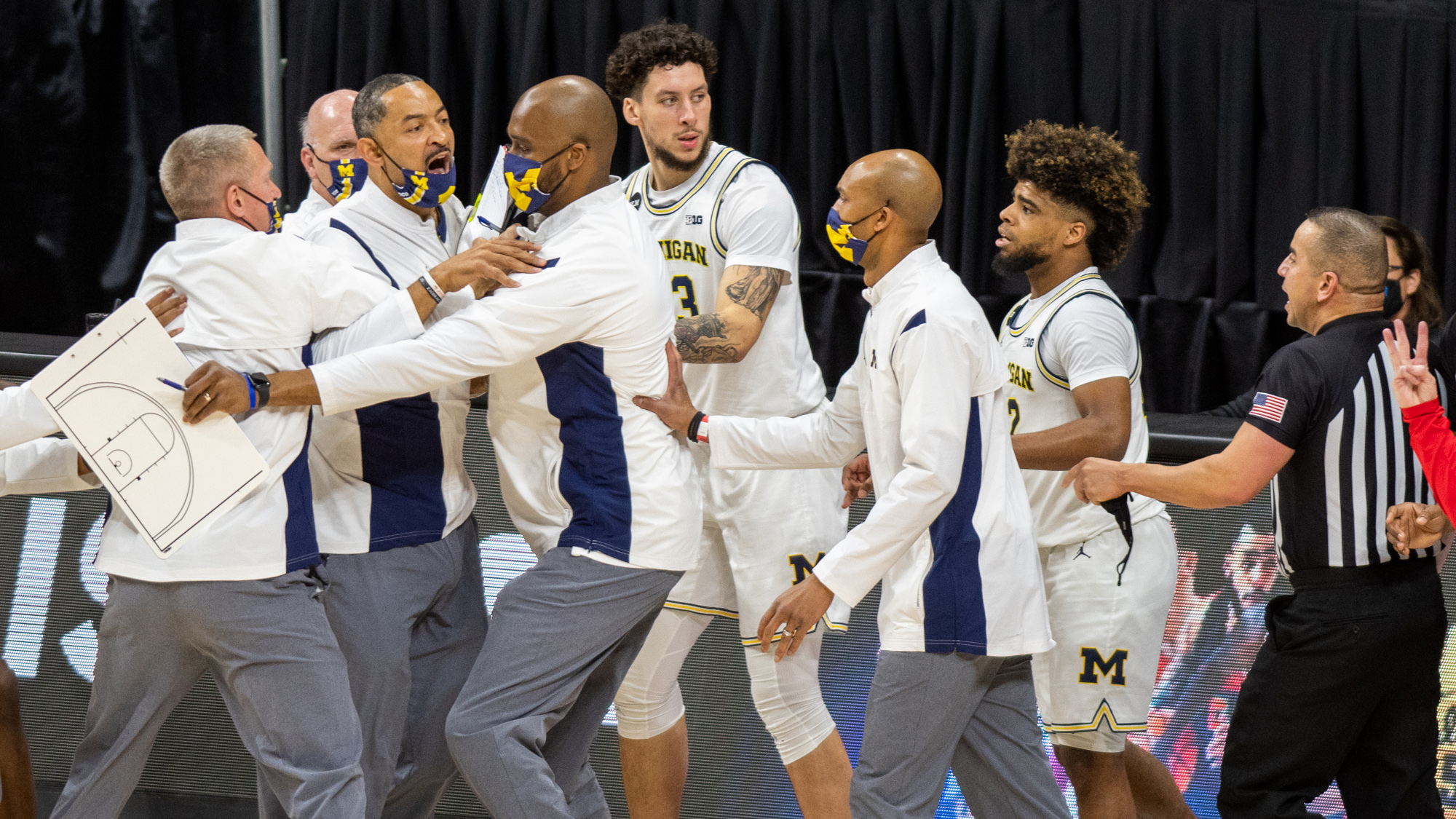 Michigan coach Juwan Howard during the scuffle between him and Maryland coach Mark Turgeon. The Terps lost 79-66 to Michigan at Lucas Oil Stadium on March 12, 2021. (Joe Ryan/The Diamondback)

INDIANAPOLIS — Juwan Howard emerged out of the pit of fury, escorted by a host of Michigan men’s basketball players and staff. He was fired up. He had good reason to be.

The Wolverines had overcome a dry spell in the first half, taking a 57-47 lead midway through the second after Franz Wagner’s three-point attempt splashed.

But in the Big Ten, margins are tight. So, when a contentious out-of-bounds call resulted in a Maryland inbounds pass, Howard tumbled out of the coaching box — and right into Terps coach Mark Turgeon’s face.

It was a moment that seemed to encapsulate much of what the last three Maryland-Michigan matchups have been about. At least, that’s how Turgeon viewed it.

“The league was well aware of what’s transpired the first two games, and they’ll handle it from here,” Turgeon said. “But I was, I thought, as professional as I could try to be in the moment, standing up for myself — 34 years of doing it the right way — and for Maryland basketball.”

The first two meetings between the Terps and Wolverines were indeed filled with drama. Michigan center Hunter Dickinson sparked the kindling earlier in the year, saying Turgeon and his staff didn’t aggressively recruit him while he was at local powerhouse DeMatha Catholic High School — a place that hasn’t sent a graduate to College Park since Travis Garrison in 2002.

It seemed both sides were due for a rude awakening when the Wolverines traveled to College Park to take on the Terps on New Year’s Eve.

The 7-foot-1 center was dominant, overpowering Maryland’s undersized bigs en route to a 26-point, 11-rebound showing. He glared at the Terps’ bench multiple times, eventually receiving a technical foul for his troubles. It was one of four techs that were issued during the game.

“He was big, physically and just his impact on the game,” Ayala said of Dickinson after the game.

The second clash was a far calmer affair. Howard’s squad scored early and often, blitzing the Terps with quickfire threes and stifling defense on its way to a 87-63 thrashing Jan. 19.

The final meeting between the two sides took on a markedly different disposition. It was Maryland who controlled the early proceedings, quickly hushing the specks of Michigan supporters that dotted the Lucas Oil Stadium stands. The Terps opened up a 12-point lead with 4:45 left in the first, looking all the more poised to knock off the top-seeded Wolverines.

But that didn’t happen. Michigan found its rhythm, breaking open a 10-point lead before the under-12 media timeout halted play. Then, came the fireworks.

Turgeon said he was protecting his players. But Howard saw the situation unfold differently. He stepped on the floor to protest the out-of-bounds call, drawing Turgeon’s glare. Turgeon pointed out Howard’s positioning to the officials, looking to coax some sort of refereeing response.

“I’m like, ‘Oh, come on man, this is what we doing today, you worried about my feet being out of the box?’” Howard said.

Turgeon stepped toward Howard. And in the heat of the moment, Howard reacted.

“I was raised by my grandmother and also by Chicago. … When guys charge you, it’s time to defend yourself,” Howard said. “Especially when a grown man charges you. And that right there, I went into defense mode in forgetting exactly where I’m at.”

“I didn’t charge him, so when he charged me I reacted. And I reacted out of defense,” Howard said.

Words were exchanged, coaches and players were held back and Howard was tossed. For a moment, it seemed as if the exchange would spur Maryland on. Guard Aaron Wiggins found the net on two straight possessions, halving the Wolverines’ lead.

The brief clash between Howard and Turgeon had little impact on the final score, in the end. But, it was another twist in the sordid tale of the Big Ten Tournament, a fleeting moment of chaos that captivated the college hoops world in a game largely defined by Michigan’s dominance.