Maryland men’s basketball can’t keep up with No. 16 Michigan in second half of 84-73 loss 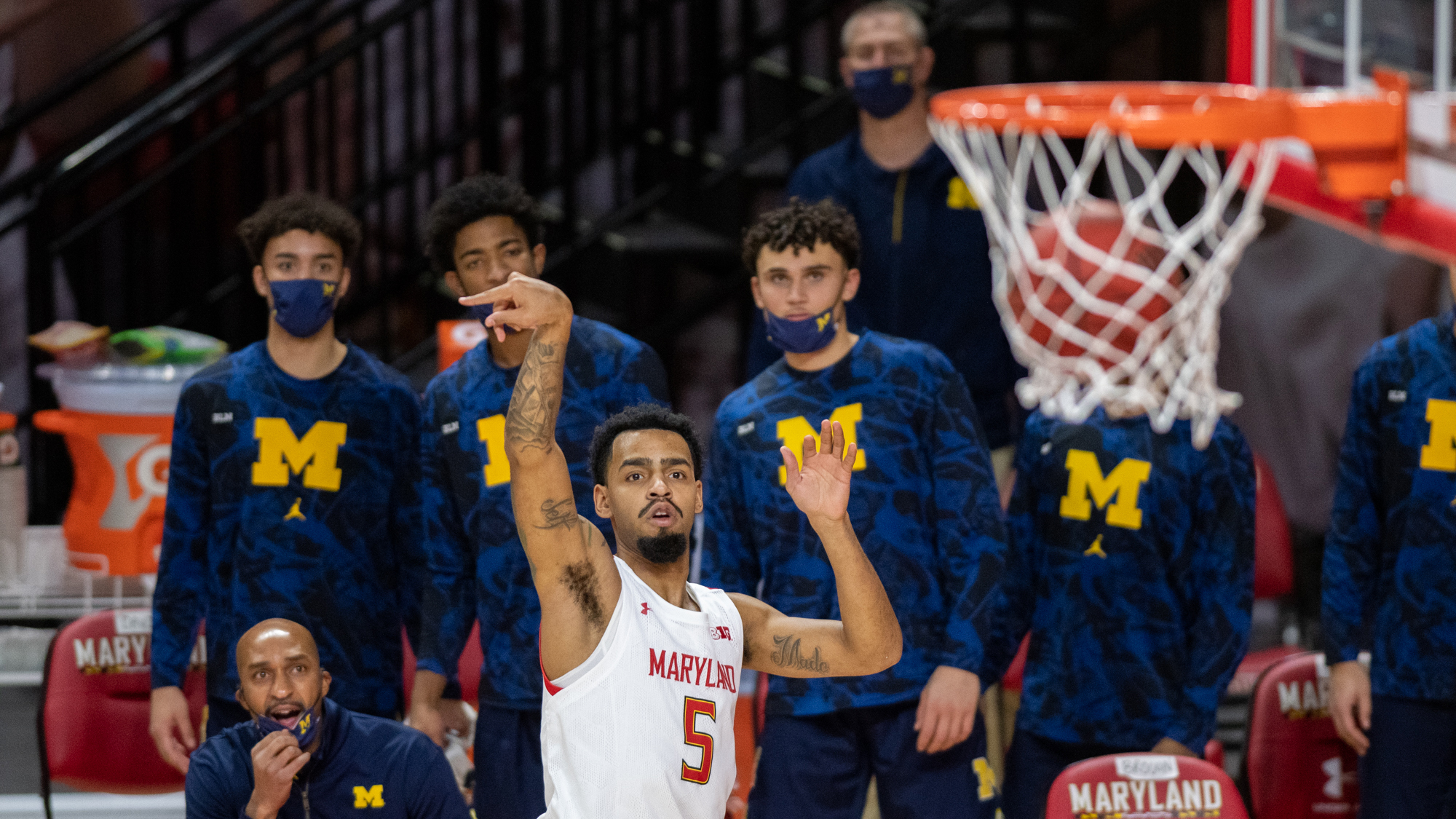 Michigan big man Hunter Dickinson had been a problem all night for Maryland men’s basketball’s defense, consistently outmuscling the Terps’ weaker and shorter defenders. And with 12:58 left, the freshman let it be known, flashing to the rim before throwing up a contested layup through contact.

It fell, just as it had done all night. And Dickinson flicked his finger downward, another and-one in a night filled with them. He had pushed the Wolverines’ lead to three.

It was a sign of things to come for Dickinson and his Michigan teammates. Maryland battled throughout, opening up a four-point lead at in the second half.

But it just couldn’t handle Dickinson’s threat. The DeMatha product had a career-high 26 points, powering the No. 16 Wolverines to an 84-73 victory over the Terps on New Year’s Eve.

“It all starts with Hunter Dickinson, he was phenomenal,” coach Mark Turgeon said. “Scored on the block, passed out of the block, I thought he was really good defensively. It was just one of those nights.”

[Fueled by holiday road trip, Maryland men’s basketball is closer than ever]

Heading into Thursday’s game, there were questions as to how the Terps would handle Michigan’s star big man. The 7-foot-1, 255-pound center has been a force as a freshman, racking up 15.3 points and 8.4 rebounds on 70 percent shooting.

Although Turgeon’s squad had largely stifled Wisconsin’s bigs in Monday’s upset, Dickinson posed a different threat — bruising and crafty, with a soft touch to boot. It only took two minutes for the Alexandria, Virginia, native to make his presence felt, bumping into Galin Smith before hitting a lefty hook shot.

Much of Michigan’s early offense came from the triumvirate of Dickinson, Franz Wagner and Mike Smith, who combined for 30 of the Wolverines’ 46 first-half points. Dickinson scored 11, making all of his attempts from the field, a constant nuisance to Maryland’s post defense. The freshman was animated, twice peering at the Terps’ bench.

“We lacked in some parts where we had to pick up and he played great,” Donta Scott said. “He made some tough ones.”

Yet, Maryland responded. Eric Ayala fueled Maryland early, notching the Terps’ first seven points. Scott also came to life, pouring in 14 points of his own in the opening frame, with all but two coming from beyond the arc.

With flurries of buckets coming from both sides, tempers flared. There were four technicals issued in the first half.

Still, Maryland kept it close — despite some misfortune. Darryl Morsell was forced to depart after getting hit in the face on a shot attempt with 1:46 left in the first. He did not return.

“Everything changed when Darryl got hurt,” Turgeon said. “We were a thin team before, we became even thinner.”

[Hot second half carries Maryland men’s basketball to 70-64 upset of No. 6 Wisconsin]

But the Terps’ offense kept ticking. And following a last-second Scott three-pointer, they entered halftime down just two.

Maryland’s hot shooting in the first period — 51.6 percent from the field, 81.8 percent from the three — kept it close to start. But that shooting clip began to recede in the second half. Meanwhile, Michigan kept pouring it on, with Dickinson serving as the architect.

The Terps started the half well, using a 10-4 run to open up a four-point lead five minutes in. The offensive dynamism that defined their first half would soon dry up, though. Shot after shot clanked out, Maryland scoring a measly nine points in the ensuing nine minutes.

On the other side of the court, Dickinson continued to find space and time in the paint. The Terps’ defense had bent at times in the first half, unable to handle his strength and size, particularly as Galin Smith fell into foul trouble.

In the second, the levee finally broke. The local product scored 15 points in that frame for 26 in the game, a new career-high.

“He was a man possessed,” Turgeon said.

And as the Terps toiled, Michigan continued to find its groove. The Wolverines ripped off a 19-2 run in just under 10 minutes, decimating the Terps’ defense. Maryland trailed by double digits with eight minutes remaining, and it didn’t get any prettier. A strip and slam from Wagner put the Wolverines up 16, and all-but ended any hopes of a late turnaround.

“I thought we played to the scouting report,” Ayala said. “We just as a team, we gotta be better helping each other out on the interior [with] the big guys.”

So, Maryland faded away in the second half, unable to stop Dickinson, and Michigan’s high-powered offense. And in a league stacked with powerful big men, the Terps may well have some problems in the paint going forward.