Hot second half carries Maryland men’s basketball to 70-64 upset of No. 6 Wisconsin 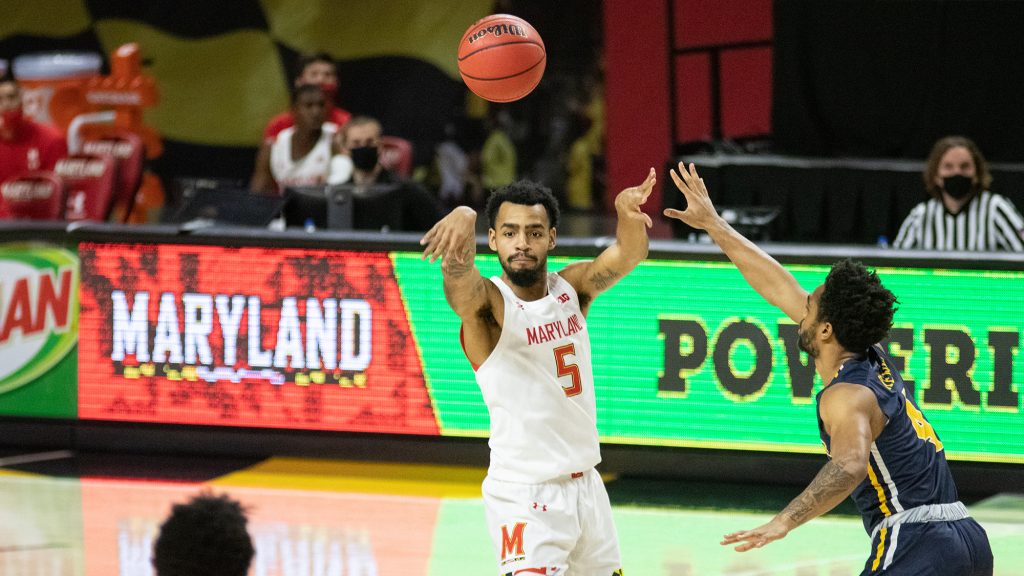 It had started with a Darryl Morsell leap to the rafters. The senior guard dunked all over Tyler Wahl with just 3:37 left in the first half. Maryland men’s basketball had cut Wisconsin’s lead to just one.

And when the Terps needed it most, it ended all the same. Donta Scott flashed to the rim, squeezing between Nate Reuvers and Aleem Ford before rattling the rim with a two handed stuff. Morsell, standing on the block, had a perfect view of the carnage, jumping in glee as Scott’s poster as Maryland’s lead swelled to five with just 57 seconds left on the clock.

Scott’s slam was the standout moment in a game of few chances, at least until the second half. The Terps, fueled by a strong defensive display and timely offense, knocked off the No. 6 Badgers, 70-64 — their first victory over a top-10 opponent since January 2016.

“We just believed from the beginning that we could come in here,” coach Mark Turgeon said. “We just get a little better every game, get a little bit tougher and it finally all came together tonight.”

[As Big Ten play ramps up, Maryland men’s basketball is looking for a closer]

Maryland was the brighter of the two sides early, building off a resurgent second-half display against Purdue on Christmas Day. Turgeon’s squad held Wisconsin to 3-of-12 shooting in the game’s opening 10 minutes. And although the Terps’ offense wasn’t necessarily flowing, they held an early lead, benefiting from aggressive drives by Aaron Wiggins and Galin Smith.

Heading into Monday’s matchup, all eyes were pointed toward how Maryland would handle the Badgers’ post performers. In Reuvers and Micah Potter, Greg Gard’s side possesses two of the most efficient players in the Big Ten, adept at both battling for paint position and stepping out and hitting shots from the perimeter.

Turgeon’s squad rose to the challenge, though. Chol Marial marked his continued growth with another highlight-reel block. The Rumbek, South Sudan, native followed that up with the first jumper of his career — a long two-pointer off the pick and pop.

Meanwhile, Scott continued to show the defensive versatility that made him such a valuable contributor to last year’s squad. The sophomore forward thrashed in the paint with Wisconsin’s bigs, a persistent nuisance whose strong base and quick hands made life difficult for Reuvers and Potter. Reuvers and Potter combined for 13 points on 6-of-18 shooting, well below their season averages.

“He’s giving up like four inches out there on post defense and battling,” Turgeon said. “So happy for him.”

Morsell also showed signs of life early, shaking off the rust after a difficult December stretch in which the senior guard shot 8-of-38 across four games. Morsell hit a corner triple as the shot clock expired — his first three since Nov. 27.

A few minutes later, the Baltimore native brought his teammates to their feet. Morsell flashed to the baseline, rising up over Wahl before finishing with a two-handed slam. And the Terps stuck around with the Badgers. Though Wisconsin made some shots, plays like Morsell’s emphatic dunk kept Maryland in it, and it trailed by four at halftime.

It seemed as if the second half would go the way of the first, both sides locked in a defensive stalemate. Yet, the frigid shooting of the opening period — 37 percent each — thawed in the second.

“A point of emphasis was just making sure I was being aggressive and taking open shots,” Wiggins said. “When I saw an open lane, I just tried to drive in.”

Soon, though, it would be Eric Ayala’s turn to take over. He was held quiet in the opening frame, missing all three of his shot attempts en route to a scoreless first half.

The junior guard was lively in the second, though, knocking down a three after the Terps forced a 10-second call. He followed that up with a layup, blowing past his defender before lifting the ball over Reuvers’ outstretched grasp.

“Just letting the game come to me,” Ayala said. “Going with the flow of the game, the ball kinda just started going in for me.”

Ayala was at it once again, hitting inside and from the line to pace Maryland’s offense en route to a team-high 17 points. Jairus Hamilton got involved, too, crashing the boards and hitting a crucial spot-up three to fend off the Badgers.

And then there was Scott. The sophomore’s pace and energy was too much for Wisconsin’s bigs. With the Terps nursing a one point lead and less than two minutes to play, he appeared to be trapped below the hoop, surrounded by two defenders.

But Scott pivoted and scooped in an acrobatic layup off the glass, pushing Maryland’s lead to three. He followed that up with a dunk that put Turgeon’s side beyond reach. A few crucial free throws from Ayala, Wiggins and Scott later, the Terps spilled onto the court in celebration.