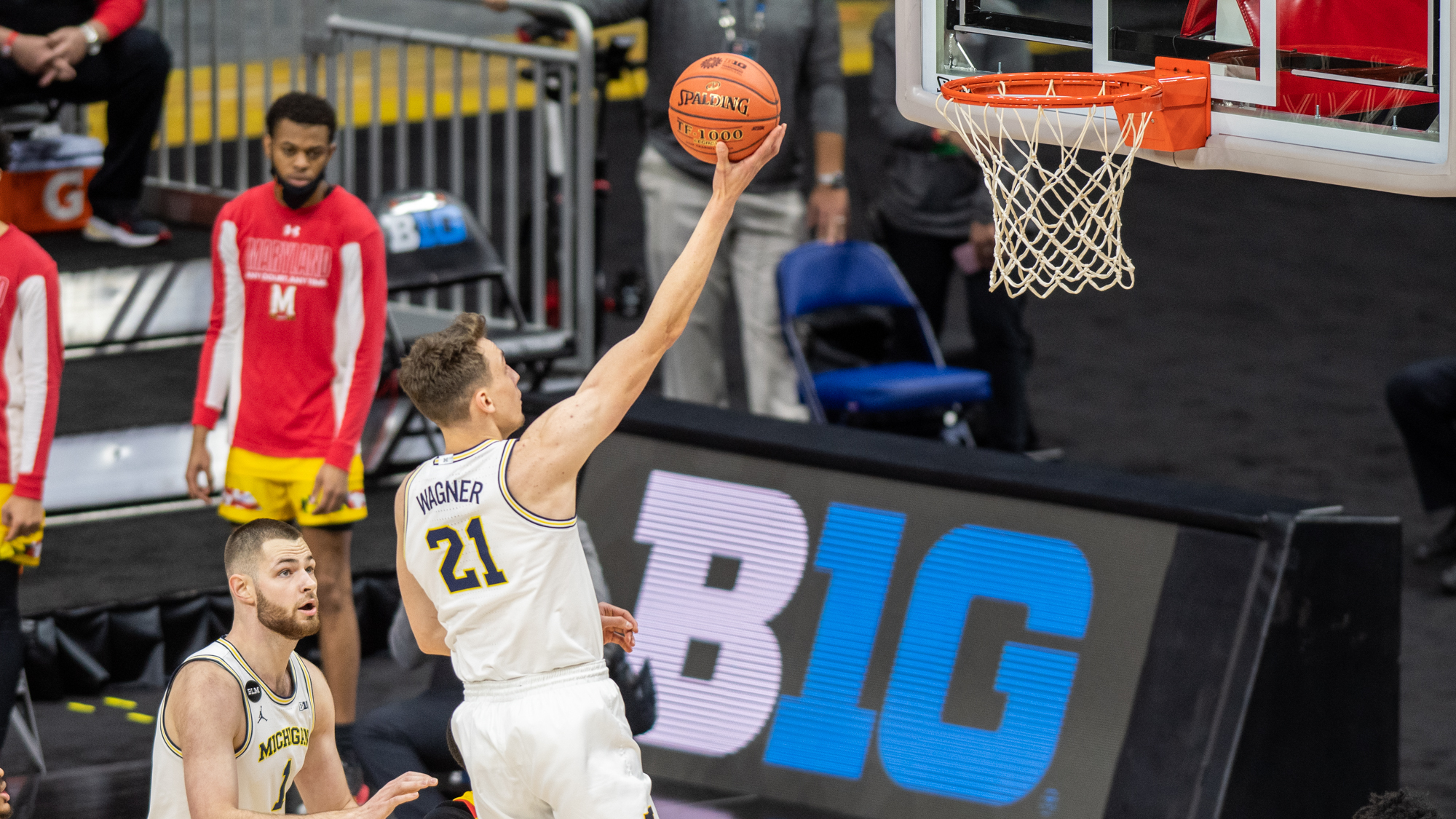 INDIANAPOLIS — Franz Wagner turned around and raised his hands, beckoning the mostly maize and blue crowd to scream even louder. The Michigan guard’s deep three had just extended his team’s lead to 13 points, its largest at the time, sending Maryland men’s basketball spiraling into a timeout.

And there was nothing the Terps could do. Eric Ayala tried to punch back with a three of his own, but Mike Smith found the net to respond for the top-seeded Wolverines.

It had been the case in the game’s final 25 minutes. Every moment of hope for Maryland was dashed by a Michigan push, this burst coming after Wolverines’ coach Juwan Howard was ejected following a testy exchange with Terps’ coach Mark Turgeon.

And though eighth-seeded Maryland paced the game in the early minutes — leading by as much as 12 — the Terps couldn’t maintain their advantage, crashing out of the Big Ten Tournament in a feisty 79-66 loss on Friday.

“We go through those droughts, but the problem was we couldn’t guard them,” Turgeon said. “That’s one heck of a team, and they deserved to win today.”

Maryland held No. 4 Michigan to just a 3-for-14 start from the field, allowing the Terps to steadily build a 15-6 edge. Even as the Big Ten’s fourth-highest scoring offense slowly began to wake up, Maryland (16-13) kept pace. Its streaky offense could not miss for much of the first 15 minutes, foiling Michigan’s defense with switches, quick cuts and kickouts.

Darryl Morsell flashed to the rack for a smooth lay-in, Jairus Hamilton swished a corner three and Aaron Wiggins sent Wagner reeling with a vicious one-handed poster. The two sides traded looks, with Ayala finishing at the rim to extend the Terps’ lead to 12.

But the Wolverines stayed calm. And when Morsell — the Big Ten Defensive Player of the Year — left the court with his second foul, they climbed back.

Brandon Johns Jr. went on a 5-0 spurt, and Eli Brooks received a fortuitous roll off the rim for a three. A pair of layups and two free throws later, and the game was tied. And Wagner closed the half on a high note for Michigan (20-3), dropping one in just shy of the buzzer to put his team up, 40-38, at the break.

“It was all us for real, making mental errors,” Morsell said. “Personally, it all started with me. I shouldn’t have picked up that second foul. … That’s on me.”

That 16-2 run to close the half dazed Maryland, and it could not recover.

The Wolverines pushed their edge to nine about four minutes into the second period, Wagner cutting to the hoop for a smooth two points. And a Terps’ offense that shot 62.5 percent in the opening 20 minutes suddenly couldn’t find twine.

First, Ayala clanked a triple. Donta Scott did the same about two minutes later. Then, Wiggins had his layup attempt rejected by Hunter Dickinson. Yet, Morsell kept Maryland in the contest.

He collected the Terps’ first nine points of the half, weaving past defenders and slashing to the rim. Morsell finished with 16 points.

Then, tempers flared. As the teams retreated to their benches for a media timeout, Howard and Turgeon exchanged words, and the two had to be separated. Howard had to be restrained and was ejected, while Turgeon was given a technical foul.

“Well, this has been going on for three games,” Turgeon said. “It’s all I did, just stood up for myself and my program and I said, ‘Don’t talk to me.’ And it escalated.”

“He charged at me,” Howard said. “I was raised by Chicago. I grew up in the South Side. When guys charge you, it’s time to defend yourself.”

The Terps used that emotion to briefly cut their deficit to five, but Brooks and Wagner cashed from deep to re-establish a double-digit edge. After one last spurt from Ayala — who led all scorers with 19 points — the Wolverines clamped down.

They closed the contest on a 12-5 run, cementing their push with a Smith three from the top of the key. He recorded a double-double, notching 18 points and 15 assists.

“He’s different,” Morsell said. “He’s never standing still. … Just with him being so fast and the ball screens being so wide, it’s definitely a tough guard.”

Brooks hit another, adding to Maryland’s frustrations. And as he turned toward the chorus of maize and blue that enveloped him, he smiled. Michigan had clawed its way back, putting itself one step closer to Big Ten glory.

The Terps, meanwhile, sulked off the court before the buzzer sounded, a tired and depleted squad unable to maintain its first half vigor against one of the conference’s true heavyweights.

“I don’t think this year we’ve played any team that’s been as good as them,” Ayala said. “Putting a whole 40 minutes together [is key].”