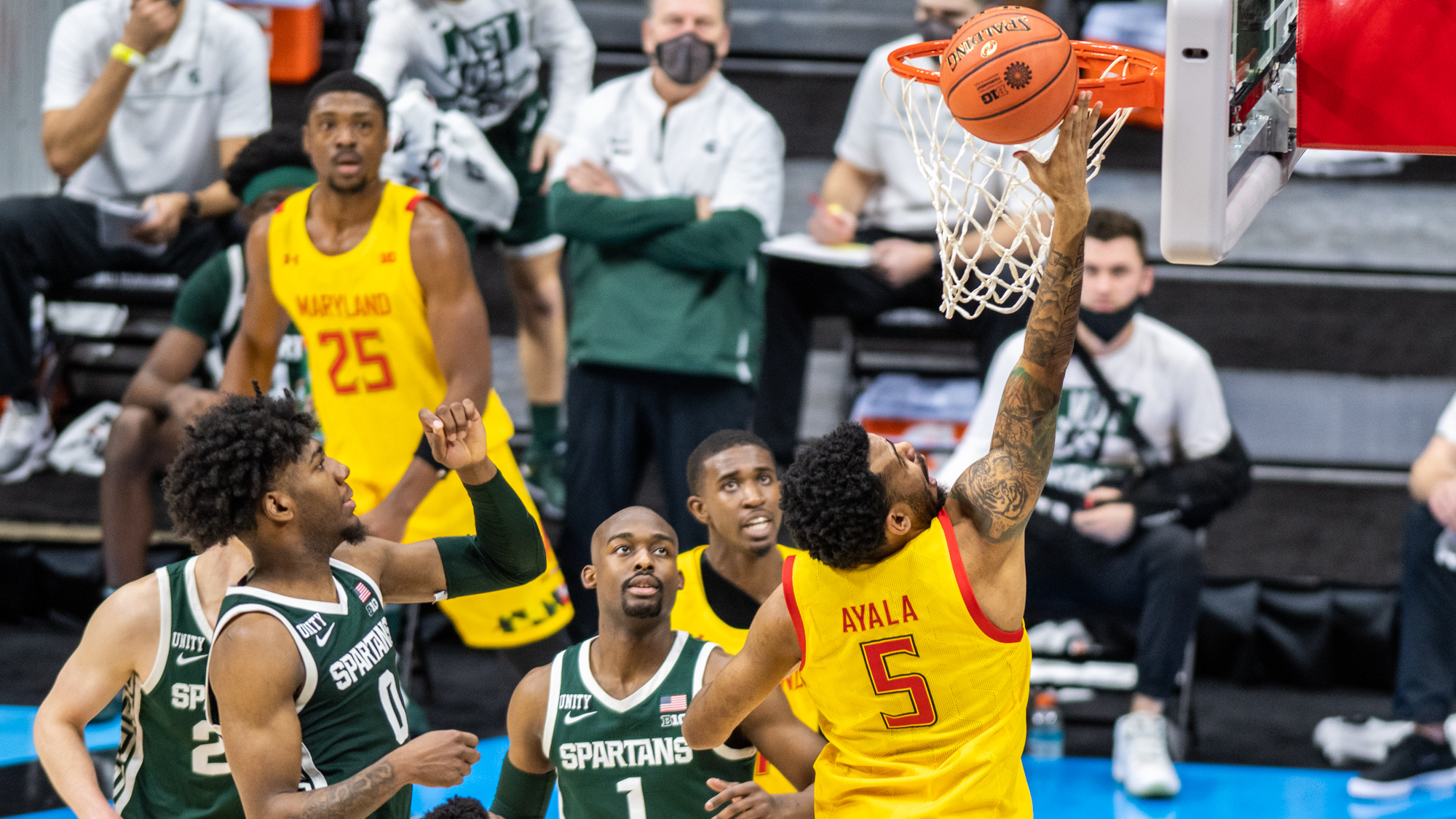 Guard Eric Ayala drives to the lane for a layup during Maryland men's basketball's 68-57 win over Michigan State on March 11, 2021 at Lucas Oil Stadium in Indianapolis, Indiana. (Joe Ryan/The Diamondback)

INDIANAPOLIS — The shrill blast of Bo Boroski’s whistle pierced through the cavernous Lucas Oil Stadium, followed by a rain of screams and expletives from the Michigan State sideline and fans. Eric Ayala, who moments earlier was sprawled out on the hardwood, rose calmly to take his foul shots for Maryland men’s basketball.

The jeering continued, and before Ayala could walk to the stripe, another tweet blew from Boroski’s whistle. He’d given a technical foul to Spartans coach Tom Izzo, meaning Ayala now had four free throw attempts waiting.

And he made them all, cutting the Terps’ deficit from six to two. It was part of a 20-of-28 day from the foul line for Maryland, which used that sequence to fire up a sluggish offense. All the while, Michigan State sputtered.

It culminated in a 68-57 win for the No. 8-seed Terps, who eliminated the No. 9-seed Spartans in the second round of the Big Ten Tournament.

“I was a little worried about our confidence and our swagger coming into this game,” coach Mark Turgeon said. “[After some early issues], we locked in, we started competing, we started battling, the last 31 minutes we really defended, played with great toughness.”

When the two squads first met on Feb. 28, Maryland flustered Michigan State with a scorching hot 11-0 start. But Thursday, the Spartans punched first.

Izzo’s squad flew through a cavernous Lucas Oil Stadium, Aaron Henry dropping a rainbow after faking out Darryl Morsell. Marcus Bingham Jr. cut past Donta Scott and slammed it home, then ran down the floor and swatted Scott’s layup attempt away. And Joey Hauser walked down an outmatched Aaron Wiggins, floating a hook shot over the Terps’ guard with ease.

At that point, halfway through the opening period, Maryland (16-12) trailed by 12 and had made just two field goals. Michigan State went big with its lineup and imposed its will against coach Mark Turgeon’s team in the game’s early minutes. The Spartans held a 14-0 scoring edge in the paint, along with a 9-5 rebounding advantage, at that point.

“We were missing assignments,” Turgeon said. “The way we play defensively, if one guy screws up, we’re all screwed.”

And then, the whistles came.

Ayala put his head down and powered into a line of green shirts, getting smacked in the shoulder, hand and face in an effort to spark a stagnant offense. He garnered eight trips to the charity stripe in the first half, sinking each of his foul shots. It was part of a game-high 21 points for the junior.

That pulled the Terps close as their defense began to clamp down. Following that Hauser make, Michigan State (15-12) drained just one field goal the rest of the half. And despite shooting just 31.8 percent in the frame, Maryland had life.

Hakim Hart drained an open look from the top of the key to give the Terps their first lead at 27-26. Then, Wiggins found space for a two-handed jam. And as the clock dipped under one second, Ayala swished a pull up three, storming into the locker room with glee as his team suddenly led 34-30.

“We found ways to just attack and make the defense collapse and kick out to get open shots,” Hamilton said. “That was very key to help us get a rhythm going very early on when we were struggling.”

Maryland carried that run into the second half, with Wiggins finding net as he fell to the deck to send the Terps up 10, forcing a frustrated Izzo to take a timeout. But the measure did not have the desired effect for the Spartans.

A Malik Hall roller from in tight would not go, a Henry three bounded away and Hauser left a jumper well short. The nearly 12-minute drought from the field ended with a ferocious drive from A.J. Hoggard, who laid it in and was fouled. At that point, Maryland led 42-32.

Morsell responded to the bucket with a 5-0 spurt of his own, smoothly dropping one from deep before hustling on a fastbreak and drawing a goaltend. And the Terps kept the pressure on.

Rocket Watts lost his handle as he tried to drive through two gold shirts, sending Jairus Hamilton sprinting the other way for an and-one. A spot-up shot from Hall fell in and out, and Wiggins scooped a second-chance layup through the twine. And Hart put back a rebound, extending Maryland’s edge to 18.

“Coach Turgeon, he told me just stay aggressive but try to get to the basket, continue to look for your shots,” Wiggins said. “It kinda spaced the floor a little bit, got our guards some more open looks, kinda opened up the court a little bit.”

As Boroski blew the final whistle, the Terps trotted off the court all smiles. They managed to snap their two-game skid and pick up yet another quality win that likely sealed a NCAA Tournament berth. Even as top-seeded Michigan looms Friday, Maryland stated its claim as a top defensive unit — one that could carry it even when shots aren’t falling.

And that just might make it a tough out for the rest of March.

“We don’t want to go home,” Hamilton said. “We want to play this March.”