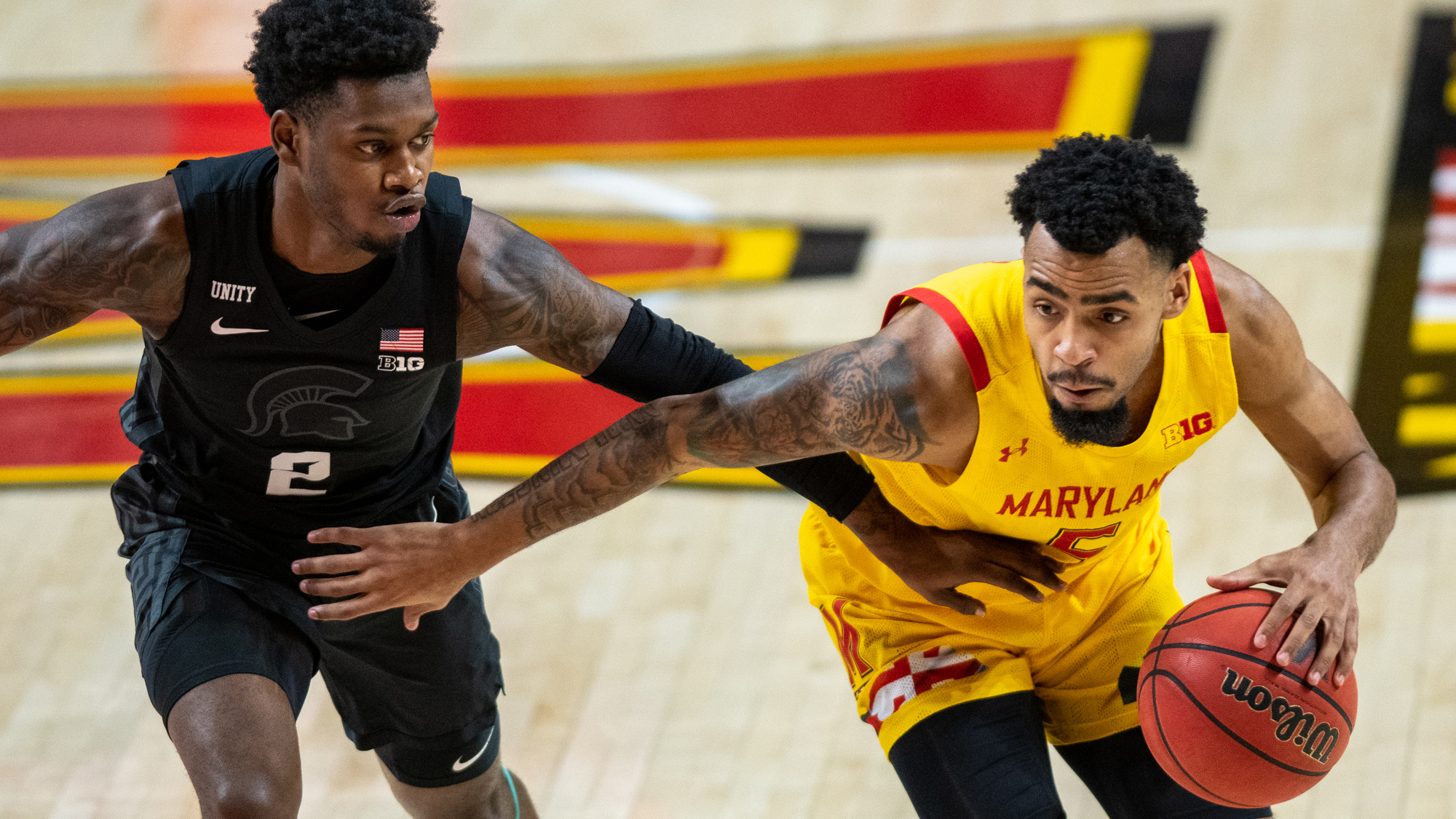 Almost two weeks ago, Maryland men’s basketball looked like a team in rhythm, filling it up early and often in an 18-point blowout over Michigan State. It was bruising, spearheaded by the aggressive play of guard Eric Ayala, who led the way for the Terps with 22 points — 13 of which came from the free throw line.

That aggression has frayed in recent weeks. The Terps labored to a loss against Northwestern. Then, they collapsed to Penn State. Maryland, once bursting with vigor, ended its regular season with a whimper, suffering back-to-back defeats that once again placed the Terps firmly on the bubble.

Now, with another matchup against the Spartans looming, coach Mark Turgeon’s squad is looking to find its pulse once more. Given Michigan State’s pedigree, it’s an aspect of play Maryland will need to bolster to solidify its NCAA tournament hopes.

“It’s Michigan State, I mean they’ve been the team in our league for the last four years, five years,” Turgeon said. “Since we’ve been in the league, they’ve won it three times. … Our guys will be pretty fired up.”

The Spartans have seen their fortunes swing in the opposite direction since the Feb. 28 clash, beating Indiana and securing a resume-defining victory over then-No. 2 Michigan.

In its 70-64 win over the Wolverines, Michigan State locked down the wing duo of Franz Wagner and Isaiah Livers. The pair combined for just 19 points on 7-of-21 shooting, giving the ball away four times in the process. Wagner and Livers average almost 27 points per game between them on fairly efficient shooting.

And heading into tournament play, coach Tom Izzo’s side is hoping to make a similar impression and make up for its lackluster showing at Xfinity Center.

“It’ll be a big challenge, one I’m looking forward to, hopefully a little revenge,” Izzo said. “But maybe more importantly, I think we’re playing a little better than when we went out there.”

The Terps found plenty of offense on the wing in their first matchup with the Spartans. In addition to Ayala, guards Aaron Wiggins, Hakim Hart and Darryl Morsell all chipped in with a steady stream of buckets.

Wiggins in particular has emerged as the scoring threat Maryland has needed. Wiggins’ scoring line has read quite impressively in his last eight games — 17, 17, 21, 22, 13, 13, a career-high 26, 15 — all while hitting more than 50 percent of his shots in all but three of those games.

“It’s definitely coming together for him and the confidence is there,” Ayala said. “We need him, we need him to be that Aaron Wiggins that we know, that I know.”

Wiggins isn’t the only one. The Terps have struggled to maintain their energy after fast starts in the past few games. Maryland raced out to fast starts against the Wildcats and Nittany Lions, imposing its physical brand of basketball on stunned sides.

But as the games stretched and shots clanked, Turgeon’s squad’s struggles became more and more apparent. Maryland scored one point in the final four minutes of the game against Northwestern. Penn State was even worse, with the Terps blowing a double-digit lead and flailing against the strength and skill of Nittany Lions star Seth Lundy.

The Spartans carry a litany of weapons, including Joshua Langford and Aaron Henry — gritty playmakers who pose just as much of a threat defensively as they do with the ball in their hands. They are led by Izzo, a coach who has made a career out of overpowering weaker sides in the perimeter and inside alike.

But the Terps are undeterred. They had the blueprint in their first clash with Michigan State, showing strength and aggression en route to a wire-to-wire victory. Now, it’s about recreating that intensity once again; this time, with a spot in the Big Ten tournament quarterfinals on the line.

“Just gotta come out with the same energy and confidence and excitement that we had in the initial matchup against them,” Wiggins said. “Guys are excited, we’re moving on and we’re ready for this one tomorrow.”