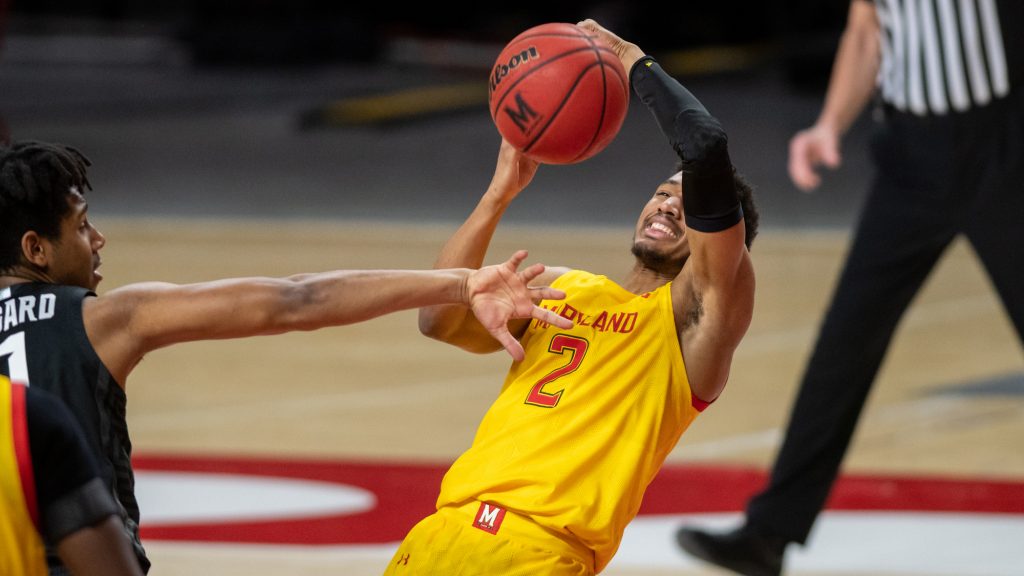 Maryland men’s basketball had just opened an 11-0 lead over his Michigan State squad in the game’s first four minutes, and the veteran coach had seen enough. He angrily gestured for a timeout and raged at his players, hoping to motivate the Spartans — fighting for a postseason berth — to respond.

All the while, the Terps were loose. After Aaron Wiggins drained the three to send Izzo into a fury, he smiled and chest-bumped Hakim Hart, who moments earlier had set the screen on Gabe Brown to make the bucket possible.

When Michigan State returned from the timeout, Maryland greeted it with swarming pressure. As the shot clock expired, Rocket Watts heaved a desperate three that harmlessly bounded into the hands of Eric Ayala.

The Spartans were never able to completely recapture the momentum in Sunday’s contest, the Terps seemingly always having an answer — be it a smooth bucket or an aggressive defensive stand. And that hot start, perhaps Maryland’s best all season, carried it to a comfortable 73-55 victory, its fifth in a row.

“Michigan State is a team that loves to come out and fight, and we just had to punch them in the face first,” Hart said.

That complete dominance has been missing for most of the year. While the Terps typically lean on their defense to control contests, they haven’t brought waves of pressure or dared shooters to take difficult looks like they did against the Spartans. And the offense typically stops and starts, hampered by giveaways and missed open shots.

But the Terps put it all together on Sunday.

It started, as most of Maryland’s games do, with the defense. The Terps doubled Julius Marble, the sophomore picking up his dribble and scrambling to pass out of it. Instead, the ball found Wiggins, who pushed the pace up the court and eventually set up an open three for Darryl Morsell.

“I think on-ball defense, just straight up guarding the ball, I think this team is the best at it,” Morsell said. “It allows us to switch and not really care about matchups because we got confidence in each other.”

That defensive attack generated offense. Bad shots from Watts, Joshua Langford and Aaron Henry came back the other way as points for Morsell, Hart and Wiggins as Maryland extended its advantage to double digits.

And unlike past games when a choppy offensive start yielded inconsistent results, that flow carried through the rest of the matchup. The Terps shot at least 50 percent from three for just the fourth time this season, and four starters finished in double figures, led by Ayala’s 22 points.

“We made changes … it’s really opened the floor up, it gets everybody involved,” coach Mark Turgeon said. “We get our spacing, we get it moving, we change sides with it and then we drive it. So we’ve always talked about it, we’ve just gotten better at it.”

Henry broke the skid 6:09 into the contest, cutting backdoor to receive a pass from A.J. Hoggard that he finished on the reverse. It was the longest the Terps have held a team scoreless to begin a game since Maryland kept Saint Peter’s off the scoresheet on Dec. 10, 2016, for the first 8:05.

But the damage was done, the Terps never looking back en route to an 18-point win that likely sealed them a spot in the NCAA tournament. It was Maryland’s most complete effort of the season and showed what the team could be at its best, providing a blueprint for success in the coming weeks.

And that could pay dividends if the Terps make a run in March.

“We had to hit them first,” Morsell said. “You let them hit you first, it could be a long game.”