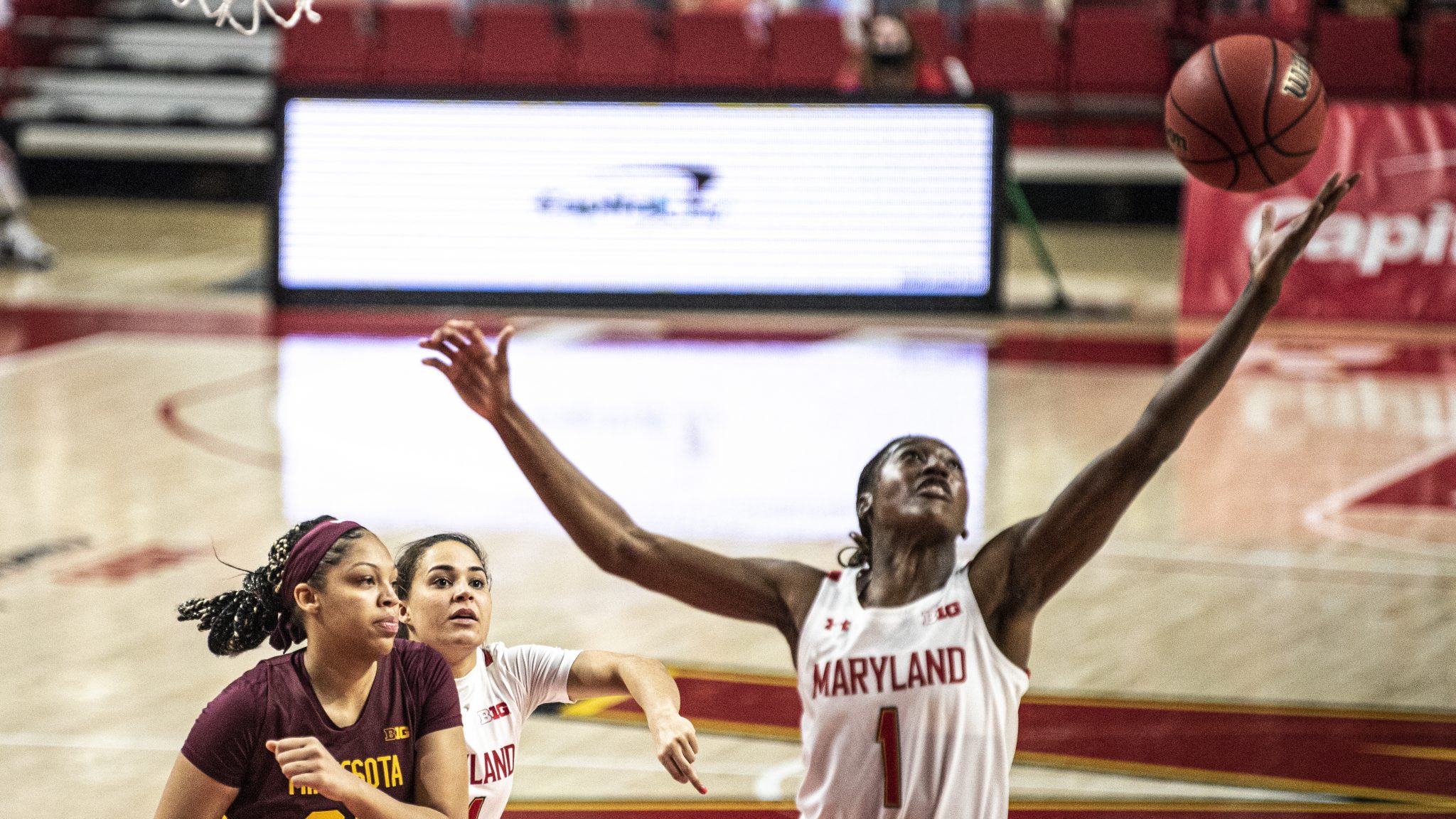 Early in the third quarter, Maryland women’s basketball guard Diamond Miller showed her quality. She grabbed a rebound and sprinted down the court, going hard into the paint and finishing smoothly with her left hand as she was knocked onto the ground.

As she got up, she complained to the referee for a foul and drew a technical. But that was the only misstep for the sophomore guard Saturday afternoon.

Miller bounced back after a rough shooting performance against Illinois, scoring 20 points on 6-of-12 shooting. Her performance paced Maryland women’s basketball, which defeated Minnesota for the second time this season, 94-62.

“As you get older you start to develop,” Miller said. “So I think I’m just developing to be a really good player, so I’m going to keep continuing to grow.”

Even in an underwhelming outing the last time she took the court, Miller displayed her advancements as a passer, dishing a career-high seven assists in that contest. And she continued to show that increased playmaking ability against the Golden Gophers.

“By far the most improved player in the league when you talk about what she brought to the table defensively,” Frese said. “Getting down on the glass, the assists that she’s making on top of her scoring.”

Off a steal, Miller raced up the court before dishing a one-handed shovel pass to a wide-open Chloe Bibby, who laid it in. The steal was one of the 13 turnovers coach Brenda Frese’s squad forced on the night, as the Terps used their patented press to severely disrupt the Minnesota offense.

Maryland scored 23 points off those miscues, but even when it didn’t force turnovers, the press took away time for Jasmine Powell and the rest of the Gophers to create any kind of offensive rhythm.

The Terps allowed their opponents to shoot just 41.1 percent from the field and 26.3 percent from behind the arc. That was shown in an especially strong first half — one Maryland ended up 49-25 — when Minnesota shot just 33.3 percent.

“It separates us into an elite level category,” Frese said. “That’s where I’m really really excited is now we’re playing both ends of the floor and that’s what you got to be able to have for March.”

The Terps went down by five just 58 seconds into the game, but a quick 8-0 run was enough to keep them ahead permanently. And that lead only grew, at one point as high as 35 points.

Still, the game wasn’t without concern as Maryland suffered a key loss in the third quarter. Mimi Collins was hit in the face and left the game, not returning. She received stitches after the game and continues to be evaluated.

That opened up opportunities for the other forwards on the Terps’ bench. Faith Masonius only tallied five points, but showed her value as an impact role player with her ability to distribute.

“I thought she was all over the stat sheet,” Frese said. “I mean she just does all those unsung hero type of plays for us.”

Masonius finished with a career-high eight assists from the frontcourt, including one on a nearly full-court pass midway through the second quarter to Bibby and another on a two-on-one fastbreak to Ashley Owusu.

Owusu continued her career season with a composed 24 points on 7-of-12 shooting. She was particularly effective at getting to the free throw line, making 10-of-11 attempts from the charity stripe to tally some easy points. In the third quarter, she drove to the hoop, where she threw up her patented one-legged runner despite a crowd of bodies around her.

Maryland once again flashed its offensive balance, assisting on 26 of its 33 field goals. Four players scored in double figures, while Owusu and Miller reached the 20-point mark. Katie Benzan added 17 points, making three threes and shooting 6-of-11 from the field.

The win is another in a string of blowouts for the Terps, who now head into a particularly crowded part of their schedule. A great deal of makeup games have yet to be played due to COVID-19 postponements earlier this season. It’ll be a tiring stretch for Maryland, but given its recent dominant stretch of play, it seems more than equipped to handle the challenge.

“We need to be built for this and the timing is right because I feel like we’re rounded out into great shape,” Frese said. “Understanding the physicality that you have to be able to play in conference play so I think the timing [of this stretch] couldn’t be better”