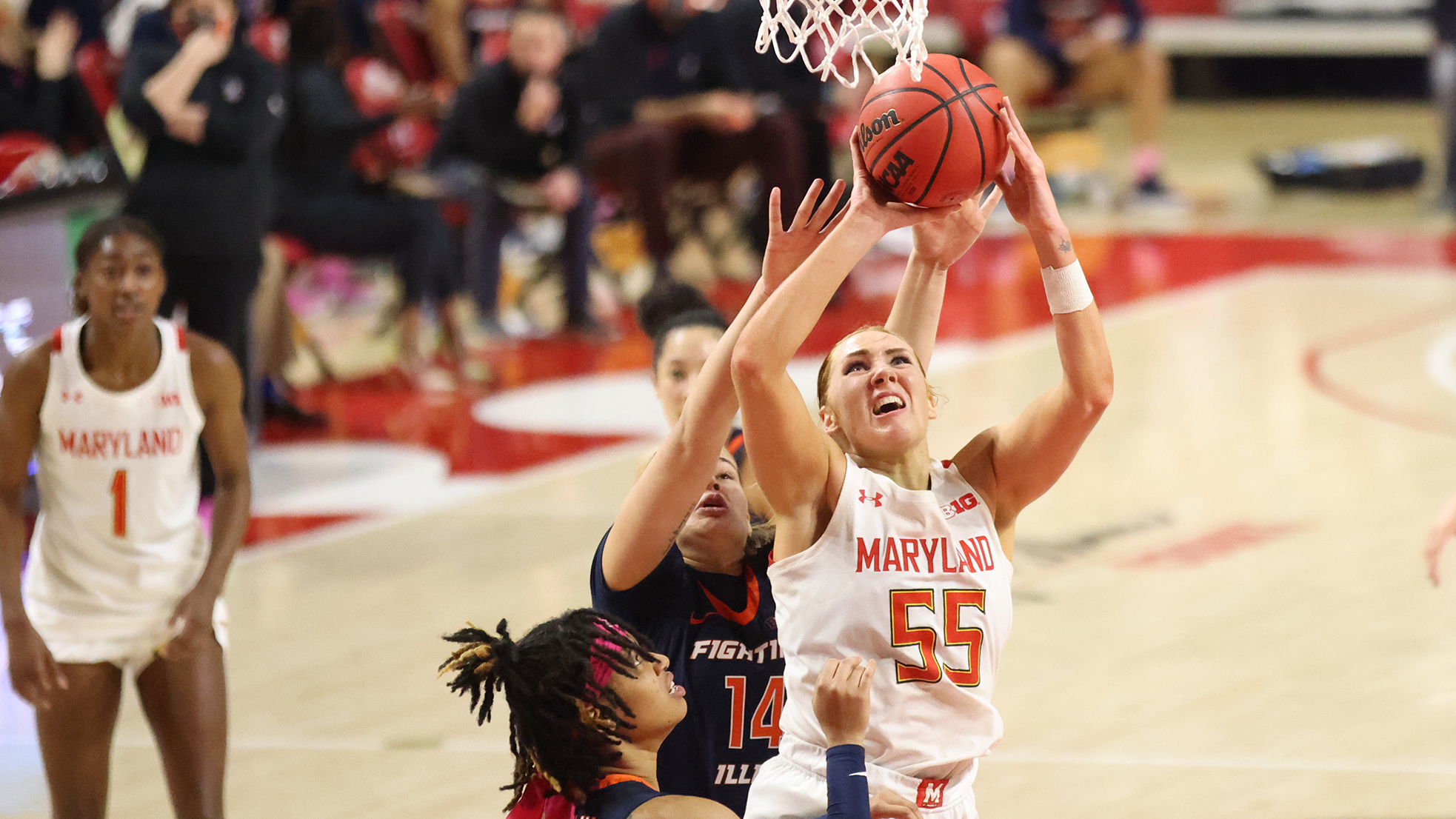 With just seconds left in the first quarter of Maryland women’s basketball’s beatdown of Illinois, Ashley Owusu pushed up the court. It’s a place she’s been regularly this season, handling the ball without a great deal of time.

Usually, she isolates and finds herself a high-quality look. This time, however, the defense stepped up. So instead, the guard bounced a pass through a pair of Fighting Illini to Mimi Collins for an easy two points as the buzzer sounded.

The assist was part of a great passing day for Maryland, which defeated Illinois, 103-58, in its biggest margin of victory of this season. The Terps had an assist on 24 of their 38 baskets in the game, thanks to unselfish play up and down their roster.

“It just makes the game so much easier,” coach Brenda Frese said. “Every player on our team scored today, and you just saw, just the easy plays that we’re making for each other.”

Intricate passing displays are nothing new for Maryland this year. Its offense, which leads the NCAA in points per game, is also seventh in assists per game.

While Owusu is the team leader in assists — more than forty dimes above second-place Katie Benzan — the rest of the Terps have flashed passing chops, too.

It’s a testament to the Terps’ balance and great vision, which they displayed midway through the first quarter against Illinois.

The possession, like so many others, started in the hands of Owusu, who passed it to Diamond Miller. After an aggressive drive to the hoop, Miller dropped a pass off to Faith Masonius inside.

Masonius paused, reading the defense from right under the hoop before picking up her dribble and faking a shot, causing Illinois defenders to jump. That opened up a passing lane to the corner where a wide-open Benzan drained a three.

It was a possession that summarized selfless play from the Terps, passing up good shots for great ones and allowing their offense to run smoothly. Miller, who went an underwhelming 3-of-14 from the field, still impressed her coach with her passing skills.

“When Diamond can have an off night for us and give us seven assists and one turnover, that’s huge,” Frese said. “That’s the progress she’s made in her game, which we need her to make.”

On one of those assists, midway through the fourth quarter, Miller directed traffic as she held the ball on the right wing. The play left Masonius wide open at the top of the three-point arc, where Miller found Masonius’ second three-pointer of the season.

[Cornrows and confetti: A look back at Brenda Frese’s time with Maryland women’s basketball]

The balance — that ability to throw a pass throughout the lineup — gives Frese and her team options, depending on how teams play them. Against Illinois, Owusu garnered a lot of attention, but that opened up opportunities for Benzan and the rest of the roster.

“They’re really unselfish and you don’t ever feel that selfishness factor,” Frese said. “They all want to score — they’re really good scorers — but they get how to be successful.”

And that ability to spread the points around could take Maryland far. Frese has seen how effective it can be.

“That [selflessness] has always been the mark of just a championship team in my time here at Maryland,” she said.