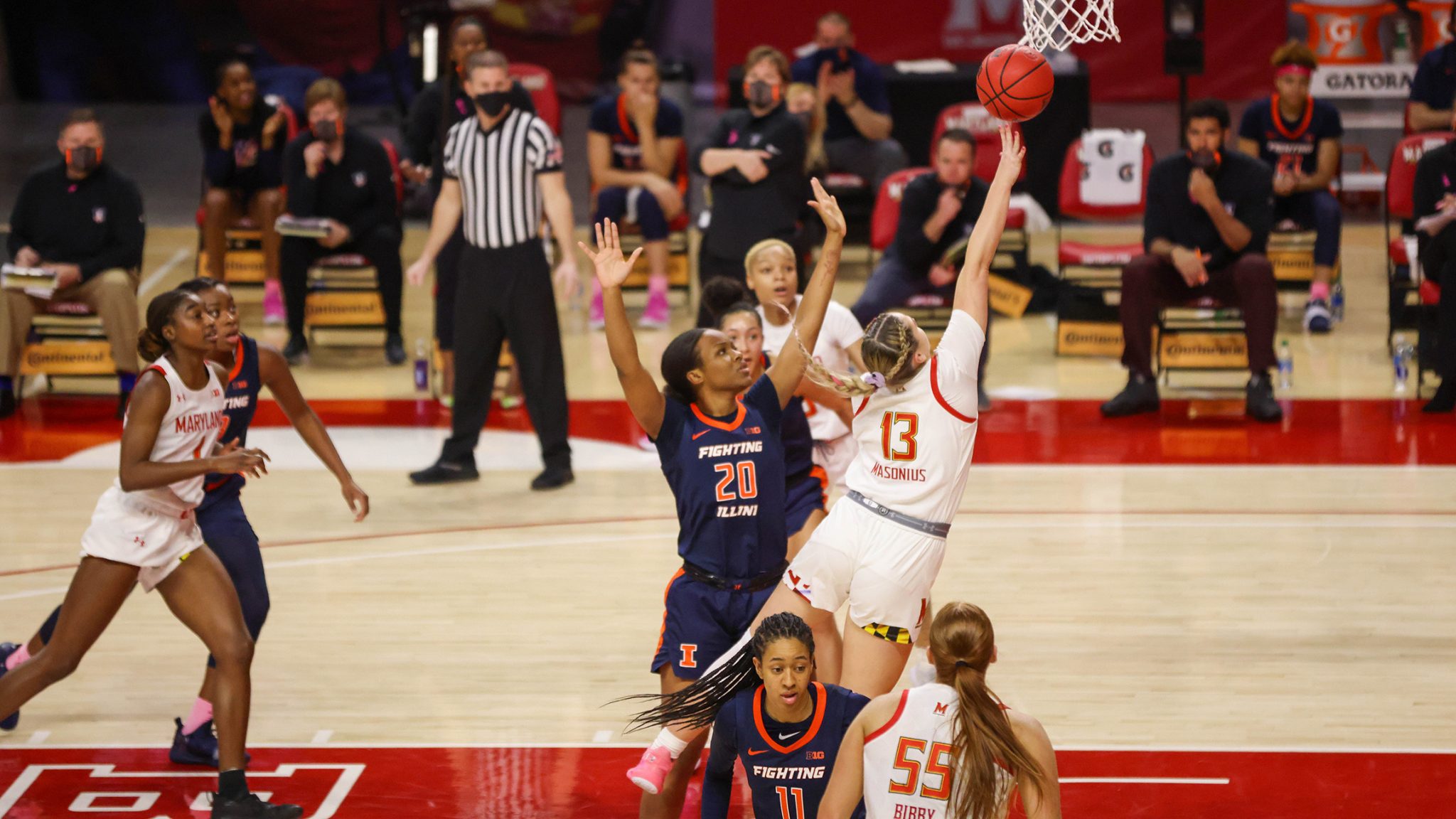 Mimi Collins was drifting to the paint, her eyes tracking the Illinois ball handler. The second the pass was in the air, the Maryland women’s basketball forward leapt toward it, tipping it to herself.

Collins picked up her dribble and threw a pass forward to Ashley Owusu, who immediately pressed the ball forward in transition. Sensing navy blue jerseys converging on her, the sophomore guard turned and found a wide open Katie Benzan, who splashed a three.

It was part of an all-around beatdown from the Terps, who forced Illinois into six turnovers on its first six possessions, started the game on a 10-0 run, and soundly defeated the Fighting Illini, 103-58. The scoring output set a season high mark in conference play for the Terps.

“We came out ready to play,” forward Chloe Bibby said. “And we played the way you know that we wanted to and we really set the standard early.”

Benzan, coming off a game where she only had two points, rebounded in fine form. Unfazed by her 1-of-6 performance from last game, she launched 10 three-pointers in the first half, making five en route to 19 points.

“She just continued to play the right way, she just makes championship plays,” coach Brenda Frese said. “I thought she was also really confident coming off of ball screens and really taking advantage of the shot selection that she had.”

[Cornrows and confetti: A look back at Brenda Frese’s time with Maryland women’s basketball]

Late in the second quarter when Illinois was making a mini-run, she caught the ball on the right wing, pump-faked the defender, stepped to her right and drained a three-pointer to add to her already gaudy total. She darted around the perimeter, using off-ball screens to get open for threes. She would finish with 22 points and added four rebounds, going 6-of-12 from three.

Benzan also notched two steals Wednesday, part of a stifling defensive unit that racked up 14 steals and held Illinois to just 33.8 percent shooting. In the first half alone, the Terps forced 15 turnovers and scored 24 points off those miscues.

“When we’re able to run in that transition I really feel like that’s our game and that’s where we do score our points,” Bibby said. “It’s just when we get our defense in lockdown it’s just so much fun to play with.”

Maryland’s press was dominant throughout, speeding up a struggling Fighting Illini squad. Two minutes into the second quarter, Diamond Miller and Owusu combined to harass a hapless Illini player. Miller jumped and used her length to deflect an Illinois pass that went high into the air and landed right in Owusu’s hands. She then threw the ball back to Miller, who was cutting to the hoop.

On her drive, Miller lost the ball, but a fortuitous bounce saw it once again in the hands of Owusu, who was able to lay it in.

Owusu had another impressive performance, scoring 17 points and adding seven assists. She displayed her point guard instincts and abilities throughout the night, setting up her teammates with a spate of electrifying passes.

Early in the third quarter, Owusu drew a double team as she neared the baseline. She turned away from the defense before whipping a one-armed pass to Chloe Bibby, who had sealed off her defender in the low post.

“I thought we were really really unselfish,” Frese said. “So a lot of great things to be able to build off of.”

Bibby had 20 points on 8-of-15 shooting, adding in 9 rebounds as well. Alongside frontcourt mate Mimi Collins, Maryland’s post play had continued to make strides despite Angel Reese’s absence. Collins was imposing on the defensive end, racking up two blocks and four steals.

Since their loss to Ohio State, the Terps have played four sides relegated to the middle and bottom of the Big Ten standings. In that time, they’ve taken care of business, beating all four sides by 22 points or more, not merely beating teams but blowing them out as they continue to prepare for the ever-approaching postseason.

“As a team, we just punched first and dominated,” Benzan said. “And as Coach B always says, we took their air right in the first quarter.”