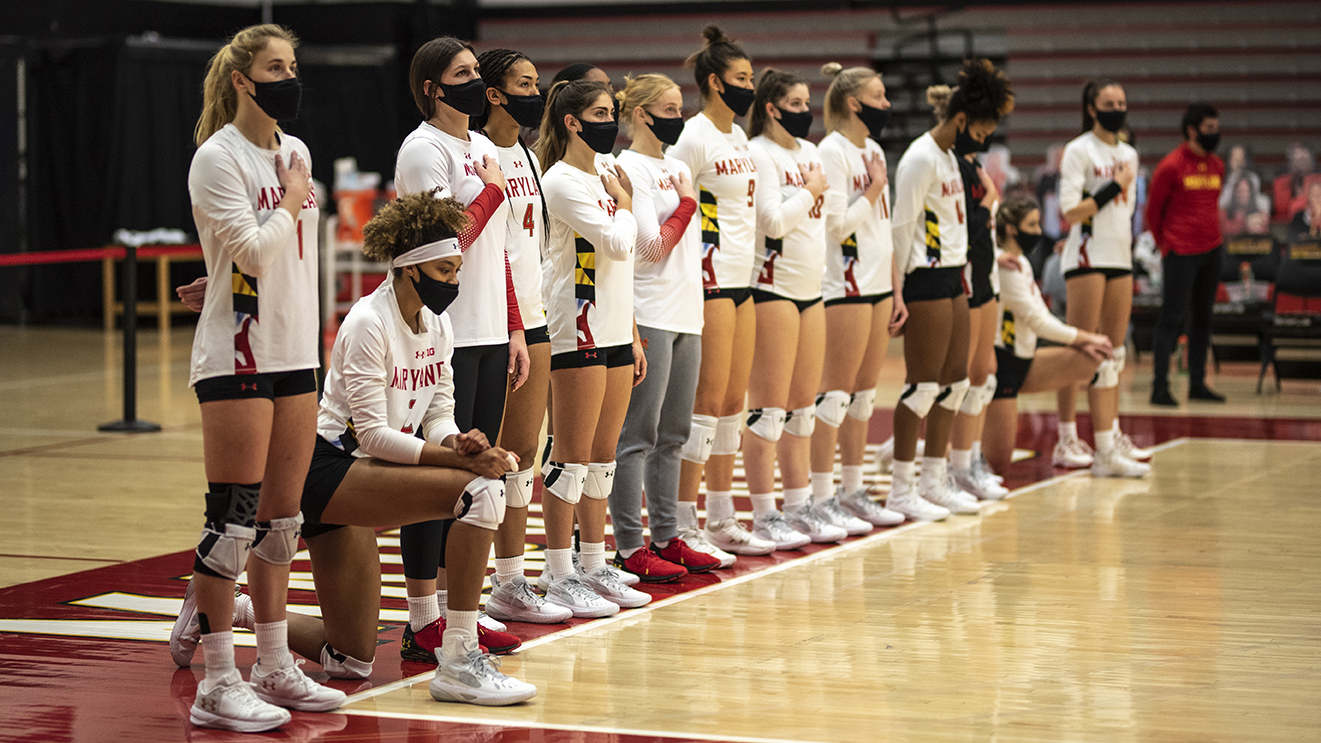 Moments before the opening serve in Maryland volleyball’s contest against Minnesota, Xfinity Pavilion fell to a rare hush.

For the previous hour, energetic music had engulfed the arena, serving as a precursor to the high-spirited Big Ten matchup to come. At this moment, however, the only noise emanating from the pavilion was the voice of the PA announcer, who instructed the almost nonexistent crowd to rise and remove their hats for the playing of the national anthem.

As the Terps lined up shoulder-to-shoulder, standing on the red hardwood baseline facing the American flag, middle blocker Rainelle Jones slowly dropped to one knee.

Jones, like many other athletes, has chosen to use her platform to protest racial injustice.

“I’ve always actually wanted to kneel during the anthem ever since I sort of got into the social justice movement, but I never had the courage to,” Jones said.

[Maryland volleyball is determined to move past 0-6 start]

The nationwide protests over the summer pushed Jones to take a stand by taking a knee. It’s been her way of showing support for the movement.

“I want to sort of make my mark and make it known that I believe in this,” Jones said. “And this is what I’m gonna do to show that I’m advocating for it,”

While Jones and many other athletes believe kneeling during the national anthem is for the betterment of the country, they’re also aware of the dangers that come with amplifying their voices in a public platform.

“Colin Kaepernick he [had] the backlash of kneeling during the anthem,” Jones said. “And other people, other athletes have had a ton of backlash, with doing something that signifies what they believe in.”

However, Jones said conversations with her teammates and family allowed her to feel comfortable in her decision to strive for change. Those conversations kicked into gear after the police killing of George Floyd last May.

For Jones and the Terps, educating themselves and those around them is pivotal in their desire for promoting diversity and inclusion.

[No. 4 Nebraska cruises past Maryland volleyball in straight sets, 3-0]

That has started by incorporating dialogue regarding racial equality into their routines, including discussing Black Lives Matter during pre-practice meetings. The team has also reached out to this university’s diversity and inclusion office.

And although the steps are small, they represent tangible progress for Jones.

“It’s definitely something that wasn’t talked about before in the past, and I feel like there’s a great opportunity for us to talk about [social issues],” Jones said. “It’s an open door, basically, for us to share our stories and our experiences and how we can … better our environment.”

As Jones continues advocating for racial equality — whether by kneeling for the anthem or writing “BLM” on her thumb tape before matches — she issued a call to action for her generation to stand up against racial oppression and make their voices heard.

“This is the time where we make our mark, and we find ways to improve from the last generation,” Jones said.