No. 4 Nebraska cruises past Maryland volleyball in straight sets, 3-0 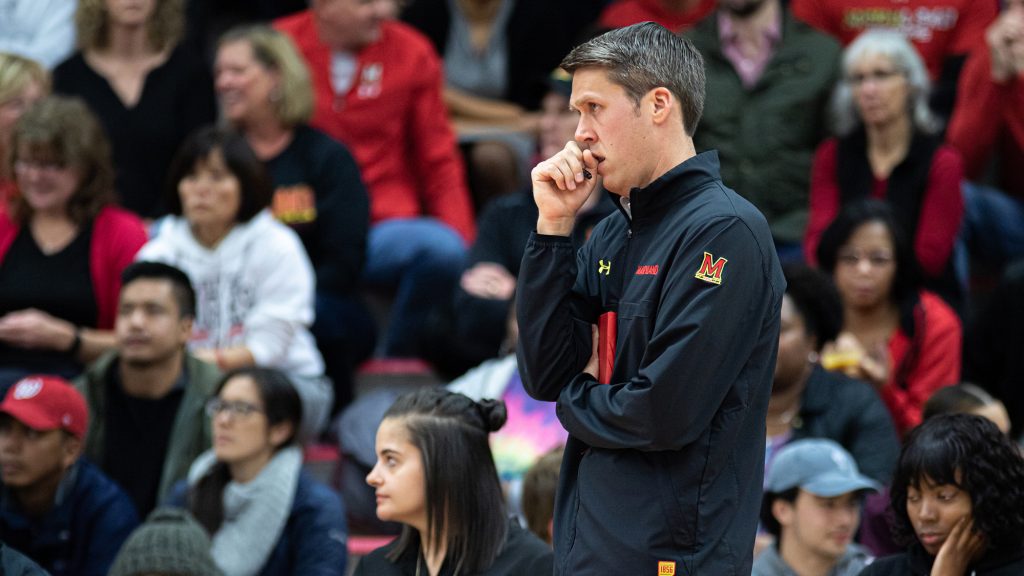 With Maryland volleyball down nearly double digits in its third set of action against No. 4 Nebraska, Erika Pritchard’s serve ended up in the hands of libero Nicklin Hames. Hames lobbed it high, and outside hitter Riley Zuhn made no mistakes, pummeling Hames’ setup down the line for a flashy kill.

This sequence was all too familiar for head coach Adam Hughes and the Terps, struggling to compete with an efficient Cornhuskers team that accumulated 49 kills en route to a 3-0 sweep of the Terps (25-14, 25-21, 25-18).

“I didn’t think we played our best tonight,” head coach Adam Hughes said. “I thought Nebraska played a little bit cleaner than they did last night… you gotta give credit where credit’s due.”

Nebraska picked up right where it left off in set one of Saturday’s rematch, accounting for nine early kills to race out to a 14-9 lead over Maryland.

The Cornhuskers, who slightly wavered in their opening set against the Terps the night before, looked to have everything worked out, boasting a .458 hitting percentage behind six kills on seven attempts for Riley Zuhn.

With the first set in the books, the Cornhuskers looked poised to roll past a Terps squad that had struggled mightily on the offensive side from the get-go.

However, Pritchard and her teammates wouldn’t go down without a fight.

Just as they had done in the second frame of last night’s matchup, the Terps went shot for shot with Nebraska, at one point taking a slight 14-13 advantage midway through the second frame.

Pritchard was sizzling, knocking in another three spikes to power Maryland’s comeback efforts. Head coach Adam Hughes and the Terps continued to apply pressure on the Cornhuskers throughout, unleashing a barrage of kills to bring a pivotal set win within reach.

But Nebraska was equal to Maryland’s challenge. And with the set hanging in the balance, it was the Cornhuskers’ quality that rose to the top.

Back to back kills by Madi Kubik and Lauren Stivrins pushed a once miniscule lead to three points late in the set. Stivrins continued to push the pace, slamming home yet another spike to put head coach John Cook’s squad on the cusp.

[Maryland volleyball faces another tough test at No. 4 Nebraska]

And as a Rebekah Rath putaway attempt landed out of bounds on the next play, Nebraska’s bench erupted. The Cornhuskers had fended off a feisty Terps rally to stretch their lead to 2-0, claiming the second frame, 25-21.

“We are just as good of a team and we can play at a high level,” setter Nicole Alford said. “I think that was shown in a couple sets there and there were moments, but we just weren’t able to sustain it.”

Down two sets to the fourth-ranked team in the country, Maryland began feeling the wrath of a Nebraska offense firmly in its rhythm.

With the duo of Kubik and Zuhn now up to 21 combined kills on the evening, the Cornhuskers flew out to a 14-5 lead in the decisive third set. They would hit .341 in the frame, charting their dominance.

Nebraska never looked back after swarming the Terps in the third, putting Maryland away decisively, 25-18 to earn the sweep. Now, Maryland must wait another week as its search for a first victory continues.

“We’re just going to get back in the gym and we’re going to rep it out,” libero Sam Burgio said. “Really focus on our communication in the seams and get better from there.”