“More is to be done”: Diamond Miller continues to improve for Maryland women’s basketball 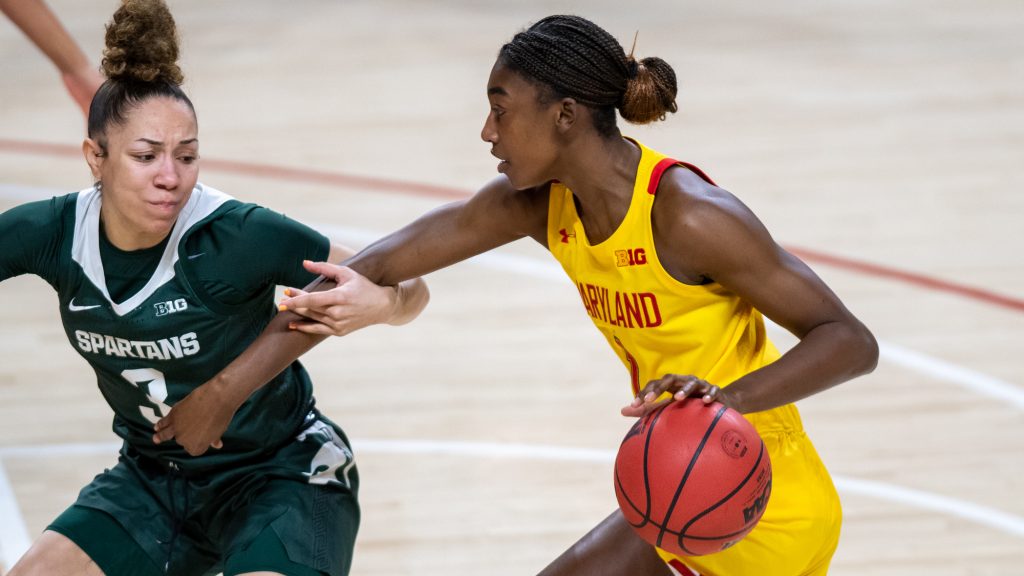 Maryland's Diamond Miller attempts to work around Alyza Winston during No. 7 Maryland’s 92-52 win over Michigan State on Jan. 28, 2021, at the Xfinity Center. (Joe Ryan/The Diamondback)

Diamond Miller caught the ball behind the three-point arc and went straight to work. She passed the arc and feigned right, putting the ball through her legs and throwing her defender ever so slightly off balance.

Sensing an opportunity, Miller struck. She switched directions, driving hard to her left, but as she neared the left edge of the paint, she paused, picking up her dribble.

With green jerseys converging around her, Miller brought the ball over her head as she stepped through one. Once she passed the second, Miller used her long arms and legs to stretch to the hoop and bank in a left-handed layup off the glass.

The sophomore scored 20 points and added 10 rebounds in a double-double, one of the key factors that allowed Maryland women’s basketball to crush Michigan State, 92-52. The victory was an empathic response for the Terps after their loss to Ohio State, specifically for Miller, who wanted to respond after a subpar performance against the Buckeyes.

“I mean, it was no secret that I didn’t play the best I could play at Ohio State, but you gotta move on,” Miller said. “We had a fresh start today, and I think we showed that we’re capable of being one of the top teams in the country.”

In that 88-86 loss the week before, Miller was uncharacteristically quiet. She was limited to just 10 points — her lowest scoring output since the second game of this year.

Miller missed a relatively easy layup to start the game, clanked two free throws in the fourth quarter, and had her coach criticize her defensive play after the buzzer. But against the Spartans, Miller handled that adversity better.

“I knew I had to play hard on both sides offensively and defensively, and I just tried to do my best and try to stay active even missed shots, I didn’t put my head down. I just kept moving forward,” Miller said. “I think I need to keep doing that and have a clear mind throughout the game and understanding that mistakes are going to happen, but you just gotta push through.”

The Terps put on a defensive clinic, smothering Michigan State’s offense and stagnating them for the entire game. The Spartans scored just 52 points, shot only 34 percent from the field and turned the ball over 24 times.

Miller was a big part of that with her overall energy level in the game. She was effective on finishing defensive possessions, securing eight rebounds on that side of the floor. Her ability to rebound as a guard brings a dangerous element to the Maryland offense, as she can initiate fastbreaks off misses and catch unprepared defenses.

On one play in the first quarter, she boxed out and then outleapt Janai Crooms for a defensive rebound. As Miller brought the ball up the court, Crooms tried to crowd her, but the Terps guard was undeterred as she pushed the pace. With the Spartan defense scrambling to get in position, Miller slung a one-handed pass to Katie Benzan for a wide-open shot.

“I’m just really doing whatever my team needs me to do. If I need to rebound, I have to rebound, play good defense,” Miller said. “If I need to score I can score, just being the all-around player for my team.”

Score she did, especially from behind the arc. While not on the same level of marksmanship as Benzan and Chloe Bibby, Miller has held her own from deep. Coming into the game she had made a steady 34 percent of her threes, on the third most attempts on the team. And against Michigan State, she was deadly.

Miller went 4-of-6 on threes, hitting a couple of shots off the dribble and punishing Spartan defenders when they dared to go under screens. That shooting is yet another part of her game Miller continues to develop as she improves as an all-around player.

And as she showed against the Spartans, she certainly has potential.

“More is to be done,” Miller said. “When you play good you always know you can play better, so just continue to watch film and grow from it.”