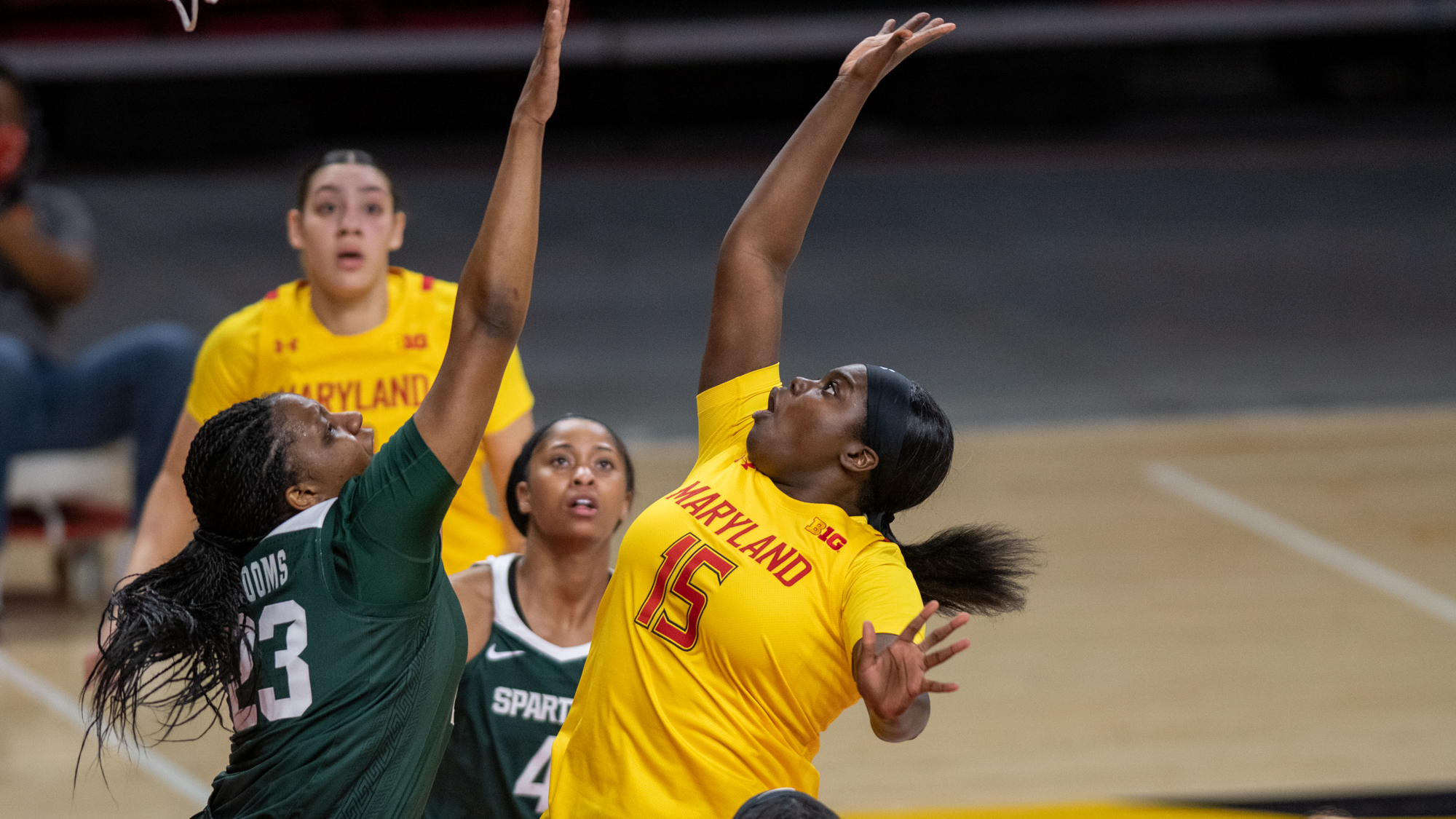 Maryland women’s basketball started slow on Monday and ultimately could not keep with Ohio State en route to its second loss of the season. Coming back to College Park on Thursday, the Terps wanted to rectify those mistakes and start fast against Michigan State.

But there was cause for concern early on. On its first three offensive possessions, Maryland missed a shot and turned the ball over twice. Down 7-3 a few minutes into the game, it looked like it might be another slow start for the Terps.

Then Maryland went on a 17-0 run, taking a possibly competitive game and blowing it wide open. The No. 7 Terps didn’t trail after taking an 8-7 lead, ending the first half up 20 en route to a dominating 92-52 win over the Spartans.

“We were disappointed with the result at Ohio State and not having consistent energy in that game,” coach Brenda Frese said. “I thought it was one of our most dominating performances up to date.”

That 17-0 run started with Diamond Miller, who scored five quick points when she confidently stepped into a three and then scored off an Alaysia Styles offensive rebound. As Michigan State inbounded, Chloe Bibby stepped in front of the pass and finished at the rim with an easy layup.

Bibby’s steal set the stage for an impressive defensive showing for Frese’s squad. Maryland’s man press was effective throughout the afternoon.

With four minutes left in the first quarter, the Spartans’ Nia Clouden tried to dribble up the floor. Attached to her hip was Faith Masonius, and as Clouden tried to cross half court, Styles stepped up and ripped the ball away. She took it to the rim and laid it in.

The second half brought no respite for a weary Michigan State squad, as the press continued. Midway through the third quarter, Janai Crooms brought the ball up the floor with light pressure from Ashley Owusu.

Bibby quickly stepped up and the pair crowded Crooms, forcing the ball out. It rolled to Katie Benzan, who lofted a pass to Owusu. The sophomore guard let the ball bounce before tossing up a high-arcing layup to score while being fouled.

“Being able to mix up some things defensively was critical to our success,” Frese said. “I thought we got all kinds of energy being aggressive and setting the tone.”

And the Spartans had no answer. In the first matchup between the two squads, Michigan State turned to Clouden for production, who posted a career-high 32 points in a narrow Maryland win.

It was a fact Frese wasn’t happy about.

“We’re tired of career highs,” Frese said. “We want to have career lows.”

To that end, the Terps keyed in on Clouden’s threat. Maryland held the Owings Mills native to 15 points on 3-of-9 shooting with two turnovers. In total, the Terps forced 24 Spartan turnovers, limiting their effectiveness.

“We wanted her to have to earn everything she got today,” Frese said. “I thought the team did collectively a phenomenal job of doing that.”

On the other side of the court, Owusu finished with 20 points. After scoring seven points in the first half, she exploded in the penultimate frame, dropping in 11 points, largely from in-tight.

And after one bucket from the post where she once again finished through a foul, the normally reserved Owusu let loose a roar that echoed in the near-empty arena.

“It was just in the moment of the game, teammates hyping me up, stuff like that,” Owusu said. “I think just our focus and energy is what gave us the win today, and I think that started in practice yesterday.”

Owusu also added five assists, including one on a full-court pass to Miller. She had a double-double on the evening, adding 20 points and 10 rebounds.

Miller was prolific beyond the arc, too, making 4-of-6 attempts, many of which came off the dribble.

“It was no secret that I didn’t play the best I could play at Ohio State, but you gotta move on,” she said. “We had a fresh start today, and I think we showed that we’re capable of being one of the top teams in the country.”

It culminated in a 40-point win, a resounding victory that sent a strong message to the rest of the conference. Despite the Ohio State loss, the road to Big Ten prosperity still goes through College Park.

“I think today was a statement win that we’re still one of the best teams in the conference and we’re just here to stay,” Owusu said.