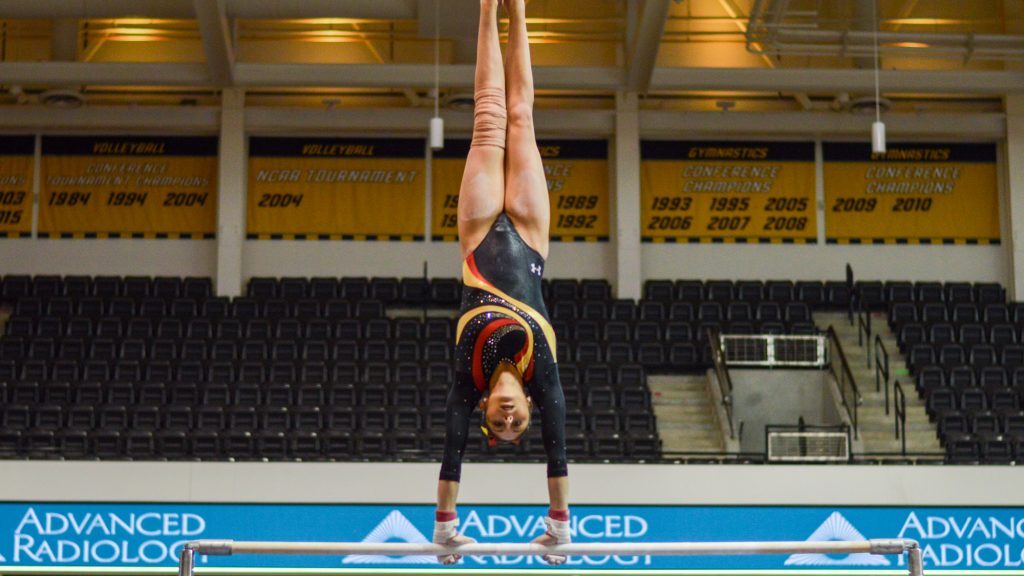 Two. That was the number that ran through the heads of Maryland gymnastics coach Brett Nelligan and his squad heading into last week’s Rutgers tri-meet. It was also the number of falls the Terps were forced to include in their team score during their season-opener at Penn State, one each on bars and beam — Maryland’s worst events through two meets.

The Terps had falls on both apparatuses again when competing against Rutgers and Illinois last weekend — one from senior Sabriyya Rouse on the beam and one from junior Sanya Glauber. Glauber’s fall was her second on the uneven bars in as many meets.

Now, in the week leading up to its third meet, Maryland looks to minimize its mistakes and add some variety to the skills it puts on display.

“Practice this week has been pretty exciting,” Audrey Barber said. “A lot of people have been working on new passes, and we’ve been adding more routines to the lineup just to have more depth.”

[When pressure mounts, Maryland gymnastics can count on Audrey Barber]

The Terps have also been spending their time in the gym focusing on the subtleties of their maneuvers. When trying to reach that vaunted 196-point threshold, every deduction counts.

“It was great for us as coaches to see them attack the details with the same, or even more, intensity than they attacked the big stuff in the weeks leading up to this,” Nelligan said. “Teams that are able to come in after a meet and train with that type of intensity are really, really dangerous.”

Maryland will be traveling to Piscataway, New Jersey, for the second weekend in a row, hoping to put up its best showing this season against Rutgers.

“We want this weekend to be our best meet,” Nelligan said. “We’re really focusing on this weekend’s competition, hitting all 24 routines, and hitting them as clean and as close to perfect as we possibly can.”

[Maryland gymnastics is slowly beginning to round into top form]

Saturday will be Maryland’s third away meet in a row after its home opener with Michigan State — slated for last week — was postponed. Barber believes the team’s performance will not be hindered by the need to travel again.

“Honestly, I like away meets just as much as home meets. I don’t really think it has any bad effects on us,” Barber said. “And in the meet it doesn’t feel like we’re away, it just feels like we’re there to do our gymnastics. It doesn’t feel foreign or anything.”

Nelligan has also noted the opportunities for camaraderie that being on the road creates for his team. The Terps get the chance to spend entire weekends together riding the team bus and staying in hotels in anticipation of competing together as a team. Bonds between teammates have already developed in this short season, pushing the Terps to their early success — success they hope will continue after spending the week focusing on the little details together.

“The goal is that when you’re competing, you feel like the whole team is competing. We say everyone is doing every routine,” Nelligan said. “It just brings the anxiety down a little bit, makes you feel more confident that you can go up and rock a routine for your team.”