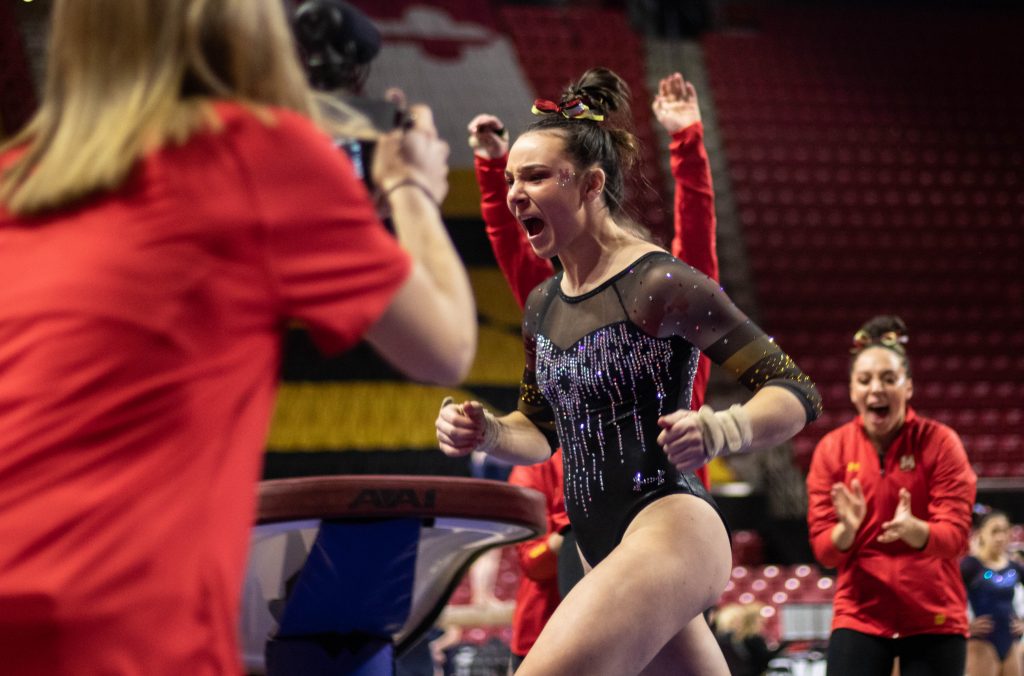 Reese McClure couldn’t contain her energy. She had just launched and twirled her way to a 9.85 vault score, platforming Maryland gymnastics’ rise.

And as she drifted to the sideline, her teammates couldn’t hold back their emotion either, draping her in congratulations and cheers.

McClure’s standout showing on vault was part of a 49.075 team score on the apparatus, setting the stage for a balanced performance Sunday afternoon.There were some occasional wobbles here and there for the Terps — particularly on bars and beam. But, Maryland looked bright and confident on vault and floor, propelling it to a 194.875 team score in its season opener against Penn State.

“I know this team well,” coach Brett Nelligan said, “We’re thrilled to get this win, but I know we left a lot of points on the table.”

The Terps traveled to University Park, Pennsylvania to compete in its first meet of the 2021 season at Rec Hall, a location where the Terps have never won a meet. Nelligan’s squad started on the uneven bars, an event which it dominated last season, ranking No. 21 in the nation on the apparatus.

Senior Audrey Barber and sophomore Emma Silberman flashed that talent, posting dueling 9.85 scores to power Maryland early. However, the Terps struggled to recreate that consistency across the lineup. Junior Sanya Glauber had to rechalk, while sophomores Aleka Tsiknias and Sophia LeBlanc notched 9.65 and 9.675s, respectively. All this amounted to a 48.225 team score on bars.

Yet, the Terps’ intensity increased moving onto their second apparatus — the vault.

After posting 9.85 on the vault, McClure, ran over to her teammates with a beaming smile on her face. She shouted “Let’s go!”  as she embraced her teammates, giving them an energetic dance move while her coaches tried to hand her a mask.

“Coming off bars, we had to pick up some energy. I love the leadoff spot, and it was my job to bring that energy,” said McClure. “People definitely got louder, and there was a shift from struggling on bars to gaining more confidence.”

This spark of energy carried the rest of the team through the rest of the rotation, as the Terps posted a 49.075 and took a slight edge over the Nittany Lions. Freshman walk-on Samantha Gilbert contributed with a 9.70 on the apparatus in her NCAA debut, and junior Alexsis Rubio led the team with a score of 9.875. Barber wasn’t far behind, though, matching McClure’s 9.85.

“There was a rush of energy, and getting to have my teammates behind me, it was really great,” Gilbert said about competing at the collegiate level for the first time.

The Terps continued their dominance on the floor, where their experience helped them prevail and record a 49.225, the No. 8 score in the nation this weekend. Three of the team’s four seniors competed in the event, and their strong showings helped the Terps distance themselves from Penn State on the scoreboard.

“[The seniors] were incredibly important going from rotation one to rotation two. Can’t say enough about what the seniors did on the floor,” Nelligan said.

[Tiara Wright’s gymnastics career began at West Virginia, but it blossomed at Maryland]

Holding a sizable 1.75 point lead entering its last rotation, Nelligan’s squad knew a solid showing on beam would secure a 195 team score — and potentially propel it to a victory over the Nittany Lions . It’s an event that Maryland lagged behind in last season, finishing the season ranked No. 39 on the apparatus.

But the Terps did enough Sunday evening, with McClure leading the charge — just as she did on vault and floor. The junior notched a new career best on the beam with a 9.925, yelling in delight as she dismounted.

McClure’s smooth and confident beam performance was the peak of a disappointing beam showing for the Terps. Barber and fellow senior Collea Burgess suffered falls, while no other Maryland gymnast scored above a 9.725. Nelligan’s side fell just short of 195.

But, Maryland earned just its third victory over Penn State. And after 10 months away, the Terps got their Big Ten slate off to a decent start and will look to correct some of the mistakes they made early in the meet.

In a bittersweet start to the season, already having its second meet against Michigan State postponed because of the COVID-19 pandemic, Maryland may get an extended opportunity to resolve some of the issues on bars and beam that could help propel it to reaching the coveted 196 team score.

“Once we clean up the rotations, I think we’re going to be unstoppable. I know the girls are going to hit the gym hard this week, and we’ll see scores improve,” Nelligan said.