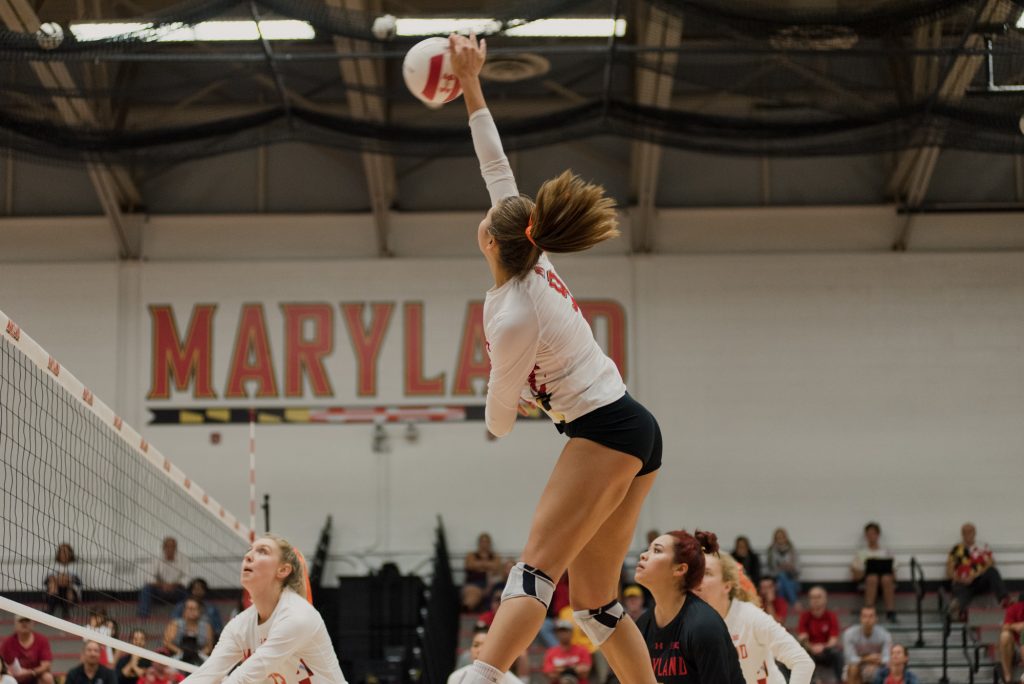 As the final whistle sounded on Saturday evening in Columbus, Ohio, Maryland volleyball had officially been swept in its season-opening road trip against Ohio State in two grueling five-set contests.

But despite the Terps’ back-to-back heartbreaking defeats, players and coaches alike expressed a resounding sense of optimism after each contest.

“You know, we’re four points away from flipping this the other side,” coach Adam Hughes said following Saturday’s defeat. “We just gotta focus on executing down the stretch.”

After taking the first set of Saturday’s contest, Maryland looked to capitalize on a fast start and even the season series against the Buckeyes, who had just ousted the Terps a day earlier. But a sloppy opening to the second set squandered the momentum garnered in the first, as Ohio State’s Emily Londot and Jenaisya Moore rallied the Buckeyes to take a 2-1 lead through three sets.

With the Buckeyes garnering a massive lead early in the fourth set, Hughes called a timeout to urge Maryland to pick up its pace and return to earlier form.

“When we went into that timeout … [Coach Hughes] said to us, ‘Hey, this is where we prove that we are relentless, that this is where you show that this is a value that is important to you guys,’ and that’s exactly what we did,” setter Nicole Alford said.

Hughes’ timeout worked, and the Terps rallied off seven straight points to claw their way back into the fourth set — which, at one point, seemed almost completely out of reach.

“I thought they could’ve given up at 15-7,” Hughes said, “But their resolve was really good, and they gave us a chance to win.”

Maryland was able to will its way back into the contest behind multiple kill performances in the set by Erika Pritchard, Jada Gardner and Rebekah Rath, seizing the fourth set and sending the match into a deciding fifth frame.

But the Terps once again fell short in the final set. With the frame tied up at 12 apiece, two errors by Maryland as well as a service ace by Ohio State Mac Podraza gave the Buckeyes the match, 3-2.

“Although we did fall short, I still felt like we had the chance, we fought back. We were able to stop runs sooner this match as opposed to last match,” libero Samantha Burgio said.

With two crushing losses in the books, it would’ve been easy for Maryland to sulk back to College Park with the sting of two close defeats in the back of everyone’s mind.

But Alford and the Terps chose to take an optimistic view of the road trip, using the losses as fuel for future contests.

“We were two points away from winning two huge five-set matches,” Alford said. “So, we’re really excited because we’re going to learn from this match and we’re going to take it into the future.”

As shown throughout both highly competitive duels this weekend, Maryland refused to fold and instead maintained a driven, positive outlook on the upcoming 2021 season — something the Terps will need to keep up as they face an increasingly difficult Big Ten slate.

“This is a group of girls who fight for each other and with each other,” Alford said, “We weren’t gonna let that set slip away from us.”