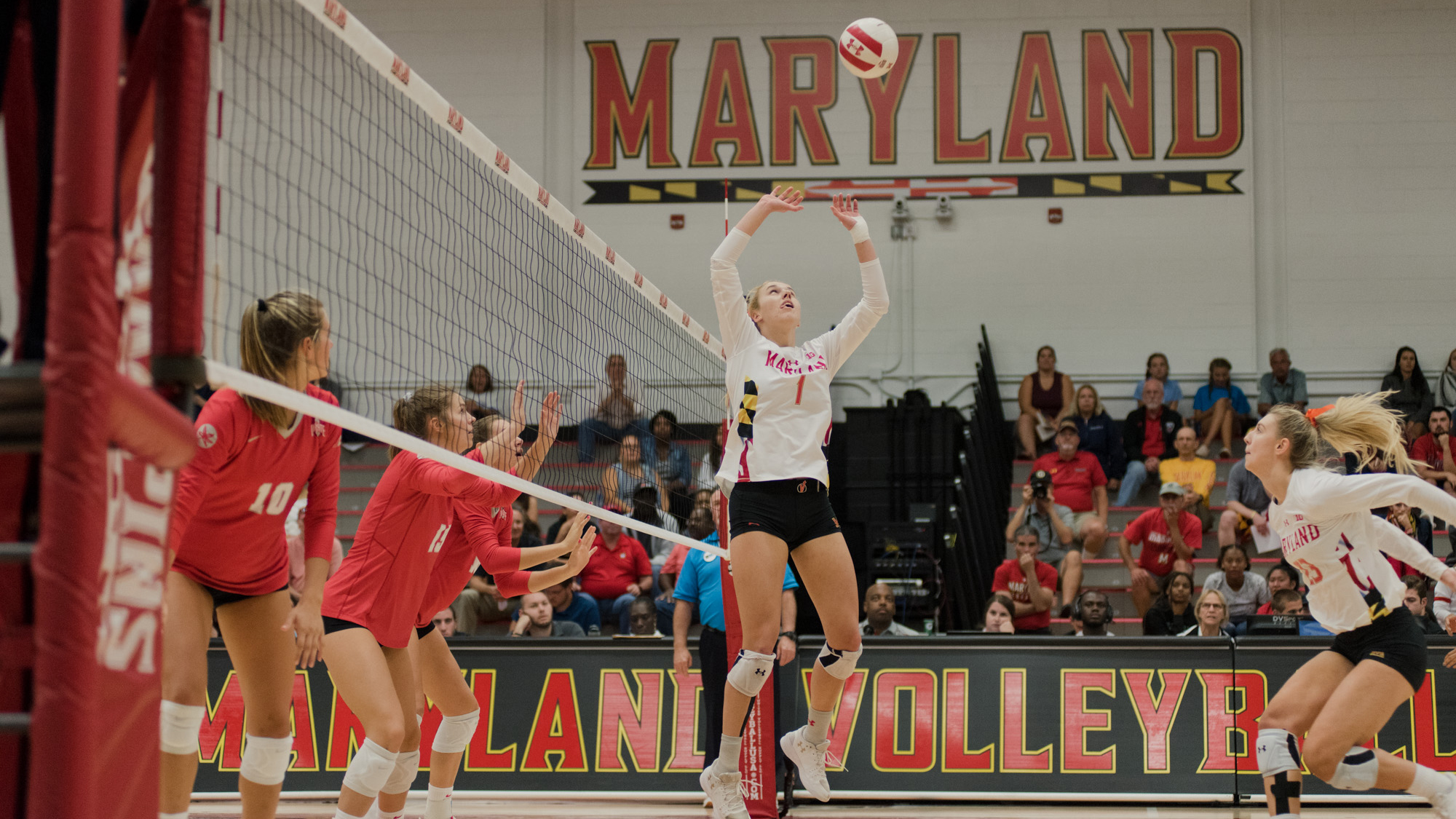 Facing an Ohio State match point, Maryland volleyball star captain Erika Pritchard was forced to do the impossible: dig a blazing fast Emily Londot kill attempt. And as the ball cannoned down towards the court, Pritchard could only tip it away, slumping to the floor as the Buckeyes celebrated.

It was the culmination of a gripping season opener for the Terps. After dropping the first set, Maryland rallied back, splitting the match at two sets apiece entering the deciding frame.

“The thing that we’ll probably take away from us is we left some opportunities in the fifth,” coach Adam Hughes said. “I think we watched two or three balls fall. It’s a sprint to 15 and it was 15-13 and watched three balls fall [and] that’s the difference.”

In its first match in over a year, Maryland’s rust was apparent early. The Terps stumbled out the gate, dropping six of the first seven points. Hughes’ squad would soon recover, though, fueled by Pritchard, who notched three kills to carry Maryland in the first game.

“They got off to a pretty good run,” Hughes said. “But after [our first timeout] I thought we kind of settled into the first set, it was just too far out of reach to crawl our way back into it.”

Ohio State racked up 18 kills, six coming from opposite hitter Londot. And fueled by their penchant for kills, the Buckeyes raced out to a 25-21 victory in the first set.

“All of us had the nerves,” middle blocker Jada Gardner said. “But after the first couple of points the nerves were gone and we got back into our rhythm.”

Ohio State’s dominance on kills would only swell in the games to come. The Buckeyes notched 66 kills on the day, 21 more than the Terps. Still, Maryland was undeterred, finding its footing in the second set.

“We definitely had a lot of communication on the court,” middle blocker Rainelle Jones said. “We all had a good idea of what we wanted to do and how we were going to execute that against the other team.”

Hughes’ squad earned 10 kills in the second. Jones notched the final two kills of the period, soaring high to finish off setter Nicole Alford’s assist and secure a 25-18 victory in game No. 2.

Jones was a constant force in Hughes’ lineup, posting a .400 hitting percentage; a stark contrast from the Terps’ .145 team average.

And Maryland’s second-set momentum carried over into the third frame. It culminated in a massive rejection by middle blocker Cara Lewis and outside hitter Rebekah Rath to clinch a back-and-forth set in which both squads traded leads.

It seemed the Terps were on the cusp of a dramatic victory, overcoming first set wobbles to cruise to a four-game win. However, Ohio State’s Jenaisya Moore became a handful in the fourth set of action. Moore was dominant by the net, posting 16 kills. And she was instrumental as the Buckeyes rallied to tie the match up at two sets apiece with a dominant 25-15 fourth set.

So, the first match of Maryland’s 2021 season came down to the decisive fifth set. While the Buckeyes and Terps traded punches early in the set, it was a flurry of Buckeye kills that spelled doom for the Terps. Maryland clawed its way back into the fifth after facing a deficit, and kept it as close as 13-14 at one point. But Londot’s hard-hit spike was too much for Pritchard to handle, and Maryland’s attempts at overturning a second deficit were thwarted.

“We left some opportunities there in the fifth [set],” Hughes said. “And I think it’s disappointing just because we knew that there were some of those opportunities in front of us.”

So, the Terps fell narrowly short of a season opening win. While Jones and Pritchard kept Maryland in the contest, they were ultimately left to rue their slow start and inability to stay in front. Still, the Terps shook off signs of rust, and showed fight ahead of a tough Big Ten slate.