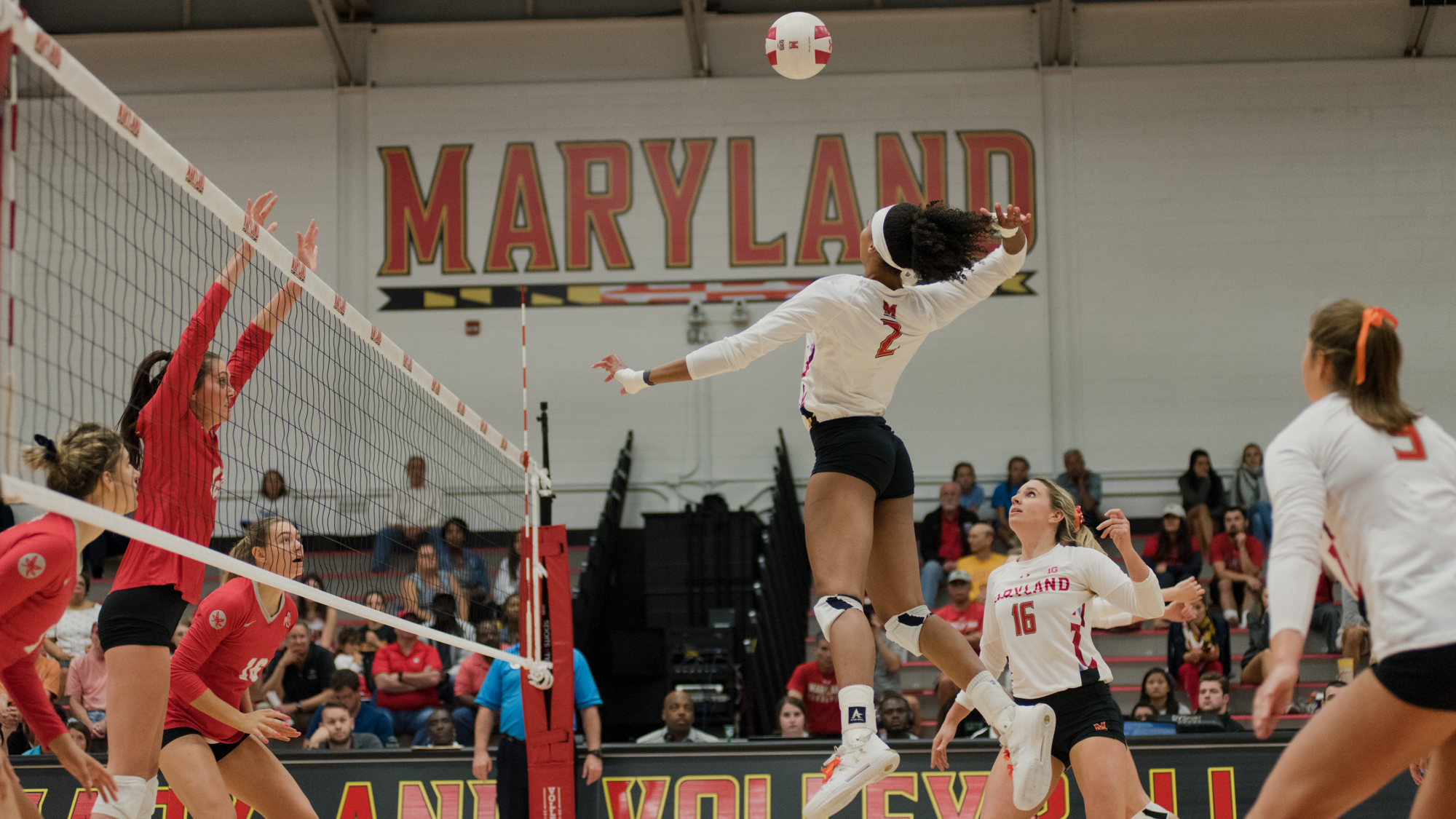 With the score knotted up at 24 in the pivotal third set of Saturday’s duel, an Ohio State kill attempt careened off of the outstretched arms of captain Erika Pritchard, floating dozens of feet into the air away from the action. With the play seemingly over, senior Nicole Alford laid out for an improbable dig, which Pritchard shot back over the net.

The back-and-forth swing fest that encapsulated Friday’s matchup carried over into the first set of Saturday’s contest, as the Buckeyes and Terps traded kills early and often. Despite falling into an early 5-1 hole amid spurts of offense from Ohio State, Pritchard’s team-leading 7 kills lifted the Terps to victory in the opening set, 26-24.

“I felt like we were really able to prepare [and were] more comfortable,” senior Sam Burgio said. “We were able to see how their hitters hit, their servers serve and how their defense is.”

Fueled by the come-from-behind victory in the first set, the Terps kept the momentum flowing early in the second, jumping out to a quick 4-0 lead. Their advantage was short-lived, however, as Jenaisya Moore and the Buckeyes quickly closed the gap with a barrage of kills.

With the Terps down 24-19 late in the second frame, a rogue serve by Alford capped off a second set filled with offensive sputters and miscues, allowing the Buckeyes to tie up the match at one set a piece.

In the pivotal third set of action, the Terps hung tough and clawed their way out of yet another early-set hole, carried by high-flying offense from preseason All-Big Ten honoree Pritchard and stifling defense from junior Rainelle Jones. Despite improved offensive play throughout the third set, Ohio State was too much for the Terps to handle, taking the third set, 26-24.

The fourth set, much like the match as a whole, was a set of runs by both squads. While Maryland dug themselves into yet another early deficit, a 7-0 run spurred by kills from Rebekah Rath and Jada Gardner gave the Terps multiple set points to try and force yet another fifth set. With the Terps ahead 25-24 in late in the set, an overturned call gave the Terps the fourth set victory.

“That set could’ve easily gone the other way… but this is a group of girls who fight for each other and with each other and we weren’t going to let that set slip away from us,” Nicole Alford said.

So, yet again, Maryland and Ohio State went the distance. Just as the two teams had done just hours prior, the Terps and Buckeyes battled to the bitter end. And despite a 20-kill performance by Pritchard and a career-high 25-dig display by Sam Burgio, the Terps were on the losing end of another five set thriller, courtesy of a 17-kill outing from Ohio State’s Emily Londot.

“It came down to needing to make a few extra plays at the end and, you know, just didn’t do that again tonight,” Hughes said.