Maryland wrestling shut out in tri-meet with Michigan State, Minnesota 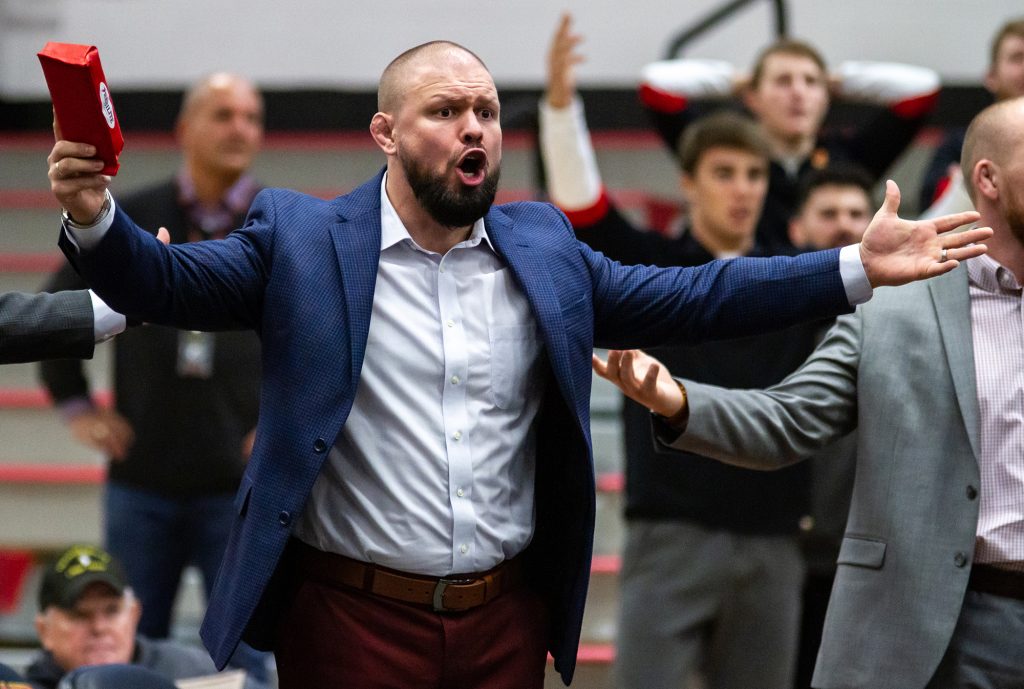 174-pounder Philip Spadafora was on the verge of grabbing Maryland Wrestling’s first win of the day against a strong ranked opponent in Michigan State.

Up the entire match, Spadafora seemed certain to finish an impressive showing against No. 17 Drew Hughes. But as the seconds began to wind down in the third period, Hughes recorded a four-point near-fall, overturning a 4-2 decision win over Spadafora in the most dramatic of fashion.

“The first time I got to my feet in the third period, I should have gone all out and tried to escape,” Spadafora said. “Because if you give a guy like that is really getting on top too many chances sooner or later, he is going to get some points.”

That last second loss was the closest the Terps would come in a frustrating afternoon at a rare Big Ten tri-meet. Facing two ranked opponents, Maryland fell 42-0 to Michigan State and 48-0 to Minnesota in a frustrating Saturday afternoon showing.

[Maryland wrestling falls to No. 3 Michigan in season opener, 38-3]

125-pounder King Sandoval was the leadoff wrestler in the Terps’ lineup, facing off against Michigan State’s Rayvon Foley, dropping the match 17-0 by way of technical fall. Sandoval didn’t fare any better against the Gophers, losing to Patrick McKee by major decision, 19-6.

“I just got to be more prepared in my warmup,” Cockrell said. “I have to have the mentality of just pushing the pace right at the start.”

141-pounder Danny Bertoni suffered a pinfall quickly at the hands of the Spartans’ Danny Bertoni. In the second meet, Bertoni was unable to get any points, losing by decision 6-0

149-pounder Michael North couldn’t mount a charge in the third period, losing to Peyton Omania by decision 13-9. And it got worse for North. He picked up a leg injury against the Gophers, and had to be helped off the mat, dropping his match by default to Michael Blockhus.

[“We need time”: After disappointing campaign, Maryland wrestling is looking ahead]

157-pounder Lucas Cordio fell quickly to a pinfall at the hands of Michigan State’s Chase Saldate. He came up short again later, this time to Brayton Lee in the second period.

165-pounder Jonathan Spadafora faced a tough task, matched against two ranked opponents. He equipped himself admirably against Jake Tucker, but ended up losing by decision 6-3. It was a similar story in the second meet, with Jonathan Spadafora unable to mount any offense against Andrew Sparks — losing by major decision, 16-3.

174-pounder Dominic Solis made his debut in the duel lineup in the second meet against the Gophers against Jake Allar but quickly suffered a pinfall loss.

184-pounder Kyle Cochran was unable to build off his victory Sunday against Michigan, losing to Layne Malczewski by decision 6-1. He was equally unsuccessful in the second meet, losing against the Gophers’ Owen Webster by major decision 11-2.

And it didn’t get much better from there. 197-pounder Jaron Smith put up a fight, but faded against Garrett Joles. Later, it took No. 1 Gable Steveson just 13 seconds to pin Maryland’s Bryan Bowes.

So, there was little to get excited about as the Terps strolled off the mat. Though they came close on a couple of occasions, they had no joy in two frustrating, albeit difficult ranked matchups.

“That’s my responsibility to make sure our kids are ready to go out when that whistle blows and get across that line and get after it,” Clemsen said. “I’ll help these guys make that adjustment hopefully.”